When Dunkirk begins, soldiers sit together watching propaganda films. Some of those features are comically harmless, like a Hitler cartoon. Other newsreels say all is well, Britain is winning. Outside, the soldiers know better.

On the homefront, citizens play off the war. It’s nothing. John Holden (Richard Attenborough) calls it a “phony war.” Holden, and others, continue their lives unaffected. The propaganda told them them not to worry, and at press briefings, those in charge hide or distract reality. Dunkirk approaches history with appropriate criticism, blasting Brits for their egotism in believing this will never affect them.

It’s not until the final moments where Dunkirk so accurately explains the disaster. “What caused this?” asks a soldier, now stranded on Dunkirk’s beaches. “Stupidity,” answers a trapped civilian, bemoaning the lack of preparation, the assurances war could not happen again, and the negligence that led to conflict.

Although led by smoldering indignation, Dunkirk still inspires and rallies a nation

In 1958, gruesome violence and injury wasn’t allowed on screen; Dunkirk turns to misery, suffering, and anger toward inaction instead. In execution, that’s more harrowing than gore. “What caused this?” is a question answered by all events prior, from a comfortably smug Holden to those in leadership who grossly underestimated the toll.

Although led by smoldering indignation, Dunkirk still inspires and rallies a nation. Mistakes led to a dramatic call to action, and those who were dismissive prior came together. That’s what people do, and the story carefully flows from a point of contention to acceptance. In two pieces, Dunkirk follows a small, lost troop looking for the beach – unknowingly nearing even greater crisis – and those at home, arguing as they lose control over their boats. The contrast is outstanding, one side surrounded by death, the other privileged.

Until the final act, scale remains small. A few soldiers, only a few characters. Dunkirk’s design plays to the idea that isolated hid the severity and desperation, even for those fighting. While everyone bickers or brushes off potential tragedy, beaches bottleneck out of sight. When men reach the sand, Dunkirk’s imagery expands. Extras line the shore by the hundreds, if not thousands. When a plane engine buzzes in the distance, they all scatter. It’s real, authentic, and alarming.

Severed limbs and brutal imagery entered war cinema as a response to decades of softened, heroic, even nationalist WWII films. A few though, like Dunkirk found an alternate method to dramatize and frighten: Show how detachment from the real world dooms so many. Dunkirk’s hero’s journey isn’t of one soldier – it’s of an entire nation coming to the same realization. 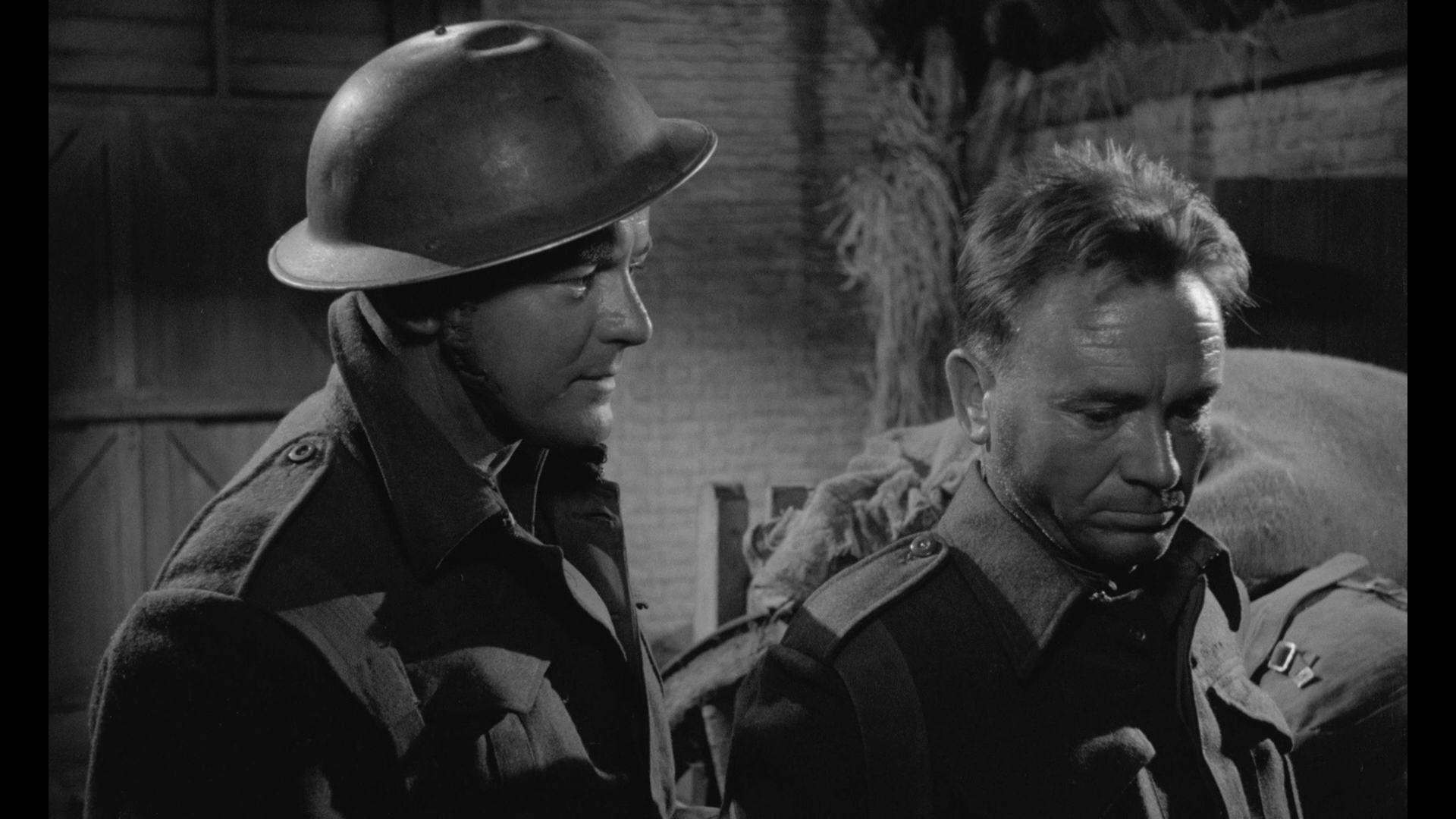 The scan itself looks fine. Resolution brings reasonable sharpness (which the filtering likely reduces). Detail and texture impress on occasion, if too inconsistent.

Light static is noted under dialog, the only technical complaint. The PCM track doesn’t introduce issues beyond usual aging. That’s harsh. Explosions push treble extremes, and there’s no low-end as a cushion.

The score is exceptionally bold though.

Actor Sean Barrett, likely the last living cast member, speaks for 22-minutes in an interview about filming Dunkirk. Especially great though is a 10-minute, color 8mm reel shot by star John Mills when on-set. A related theatrical short titled Young Veteran runs 22-minutes, and a short newsreel from the period relays the events.

Interpreting the events of Dunkirk from two perspectives, the British film is suitably angry at how history played out.

The 15 unaltered images below represent the Blu-ray. For an additional 30 Dunkirk screenshots, early access to all screens (plus the 100,000+ already in our library), 100 exclusive 4K UHD reviews, and more, support us on Patreon.