The soldiers imprisoned by German forces in The Colditz Story display unimaginable gusto, as much as frustration. The camp, set deep in German territory and set in a castle similar to something from Universal’s horror movies, is border-less. Not to these men, though.

French, British, Polish, Italian; they all mingle and devise plans. Yet they stick to their allegiances. Some agree to go along with bold escape plans. Others argue over who’s in charge, and what side they support. It’s infuriating, if part of why Colditz Story works. The movie bottles WWII as a whole, where these soldiers eventually come together for common good against Nazis.

Released in 1955, Colditz Story comes from a place of post-war celebration. It’s staged that way too. Priem (Denis Shaw) guards the camp, portly, smug, and often incompetent, an early version of what became cinema’s cardboard Nazis. Against him, clever men who continually defy orders to stay in place, making their escape through ever more outlandish ways. Colditz Story mocks the wartime German ideal. Prisoners laugh as they speak. They even play games, utterly disconnected from commanders threatening death.

Gallows humor works. It’s tonally British, certainly, leaving no doubt as to Colditz Story’s national origins. Witty comebacks and sly sarcasm create characters worth rooting for, even if their personalities blend as one. Or, maybe that’s the point – in extraordinary circumstances, commonalities bring everyone together.

Better POW movies exist. The Great Escape provides American luster, while Bridge on River Kwai brings the defiance depicted here with greater stakes. Although Germans do kill escapees, Colditz Story’s tone plays lightly. At times, the script appears outright indifferent to suffering, laughing at solitary confinement, and moving on after a kill as if nothing happened.

Colditz Story isn’t unusual in this class. Post-war anxieties from Korea to communism started to dominate films by the ‘50s. Features like this were designed to raise spirits, to look at a historical victory while lessening the reality as to instill positive memories. And hopefully, too, draw a connection to how the Nazi regime was squelched, using that as a springboard in future conflicts. Rather than a tragedy, movies like Colditz Story projected WWII from a safe distance. Not without cost, but sketching these men as smart, emboldened heroes. 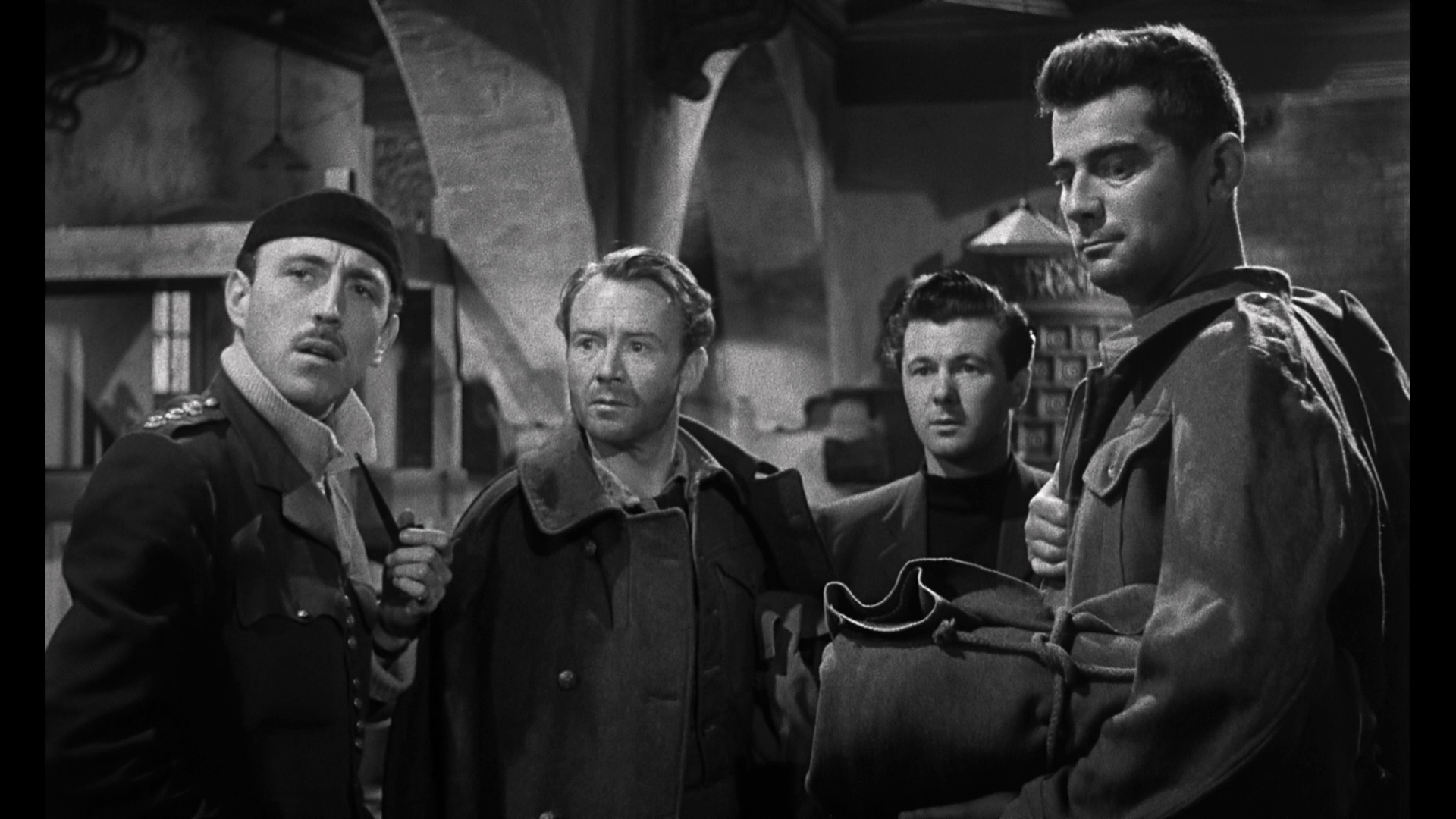 On the Blu-ray, Film Movement offers a short restoration comparison. To note, the before samples look better. Print damage is more significant in the pre-restored images, but the rest offers sharper, higher detail images.

What’s clear is this new scan underwent grain reduction, yet the actual reduction is limited at best. Sharpening makes sure of it. What source grain remains elevates, buzzing unnaturally and causing compression challenges. Some dust (after a tunnel collapse) creates severe banding. Small halos surround high contrast edges, typical of anything sharpened.

It’s a shame because the print itself looks great. Vertical scratches intrude at times, if nothing unusual for a 1955 offering. Detail is evident, especially in tight close-ups where the digital tinkering doesn’t intrude at the same severity. Deep black levels and hearty contrast represent a full gray scale, utilized to sell the dark scenery underground or candle lit interiors.

Other than gathered crowds (speaking all at once) where things become a jumble, precision is otherwise appreciable.

The 15 unaltered images below represent the Blu-ray. For an additional 16 The Colditz Story screenshots, early access to all screens (plus the 100,000+ already in our library), 100 exclusive 4K UHD reviews, and more, support us on Patreon.