Superman is the quintessential American superhero. Landing on Earth as an immigrant baby and raised in America’s heartland, he grows up with a strong sense of morality that leads him to wage a never-ending battle for truth, justice and the American Way. It’s a fundamental part of Superman’s character and what makes him so appealing. What if baby Kal-El’s rocket had landed in Soviet Russia instead of Kansas?

Adapting writer Mark Millar’s graphic novel, Superman: Red Son explores a vastly different conception of Superman as it answers that intriguing premise. Instead of typical wholesome American values, this Elseworlds version of Superman fights a never-ending battle for Stalin, Communism, and international expansion of Soviet control. Still an idealistic and moral person at heart, Superman uses his powers through the lens of Communist values he was fed growing up.

Set during the Cold War’s height, the Soviet Union under Stalin quickly utilize Superman’s powers and fashion him a symbol of Communist superiority in their propaganda. Without Superman around, Lex Luthor ends up marrying Lois Lane in this alternate reality. Luthor here is still manipulative and brilliant, an American scientist working at the highest levels of government to stop the Communist threat. He devises a plan for America to develop their own Superman as a check on Soviet aggression. It’s an interesting transformation for Luthor from pure villain to a more complicated character.

Superman: Red Son’s narrative is meant to be provocative, turning what we think of Superman inside-out

When Superman discovers Stalin’s Russia is a less-than-ideal place for millions suffering in gulags, the Soviet Man of Steel takes matters in his own hands by killing Stalin himself. Superman decides he can transform Soviet Russia into an ideal Communist state, one that actually serves the people. Along the way, familiar but different versions of Batman and Wonder Woman play into Superman’s rise and eventual fall.

Like many alternate Superman timelines, Red Son explores the idea of Superman conquering the planet, reshaping its political map with Kryptonian technology beyond human ability. The difference this time is the fairly grounded political angle, plucked directly from the Cold War era. This Superman is a true believer in Communism. Several historical figures are used in the plot, including a JFK that wasn’t assassinated. Events like the Korean War smartly play into the narrative.

Superman: Red Son is interesting, unveiling Superman’s character traits in a novel and believable depiction. Familiar characters show up but don’t always act how we expect of them. Batman is a Russian resistance fighter, opposing Superman’s regime. Wonder Woman is a diplomat that wants to work with Superman’s government, becoming Superman’s only personal friend. Some of Wonder Woman’s fans may get upset with her portrayal as a misandrist. Without Lois around, the movie does awkwardly brush off any romantic connections for Superman.

A PG-13 movie, Superman: Red Son is firmly made for older and more mature viewers. While there are plenty of superhero battles and intense action common to these movies, the Cold War themes will fly over the heads of younger viewers. So while Brainiac shows up, not many kids will find Soviet oppression exciting material.

The narrative is meant to be provocative, turning what we think of Superman inside-out. Exploring the darker potential of his powers, it’s not an entirely pleasant experience for diehard Superman fans. In almost every alternate reality explored with Superman, he ends up ruling the planet as a dictator, with most of his friends either dying or becoming his enemies.

Slickly directed with a surprisingly mature tone for a DTV animated superhero movie, Superman: Red Son is worth catching for DC fans. 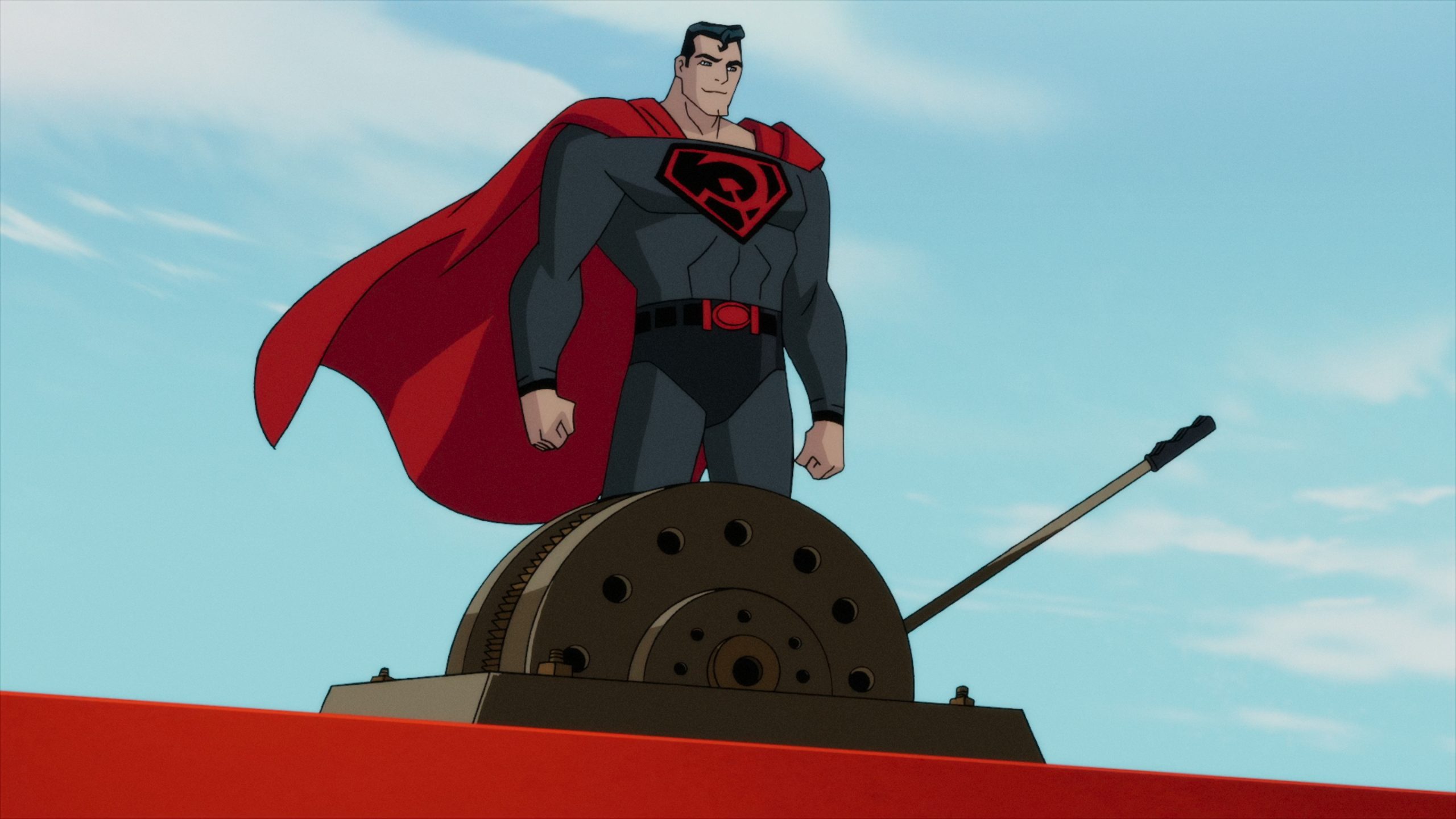 Some have questioned the utility of releasing upscaled animation like these animated DC films such as Superman: Red Son on UHD. This is one case where the differences aren’t dramatic between the 1080p presentation found on BD and the 2160p video found on UHD. The film’s palette is consciously muted for the Cold War period setting, down to the usually bright costume worn by Superman. There’s less saturation and contrast than usual, offering a slightly dimmer experience.

What the UHD does improve is the dithered textures and more efficient HEVC compression, leading to pristine 1.78:1 video without noticeable banding. Any visible flaws in the UHD’s quality transfer are in the source material, thanks to the animation budget’s limitations. The animation is better designed than most DTV projects for DC, outside of one odd scene with Superman and Wonder Woman dancing at a ball. Moving against a fixed background, the one scene has cookie-cutter animation made on a tight budget.

Superman: Red Son looks fine on UHD while lacking extraordinary HDR that might get videophiles excited. Attempting a more sophisticated tone for an animated project, it’s not quite the demo material one thinks of for animated superhero releases.

Optional English SDH, Spanish and French subtitles are available on the UHD in a white font. French and Spanish dubs come in 5.1 Dolby Digital.

The big bonus here is an all-new DC Showcase animated short featuring the Phantom Stranger. Yes, the mysterious superhero gets his own short. It’s about time after live-action appearances on Swamp Thing and Constantine.

DC Showcase: Phantom Stranger (15:07 in HD; 2.0 DD) – Animation legend Bruce Timm helms this Phantom Stranger animated short as director from a script written by Ernie Altbacker (Teen Titans: The Judas Contract). Set in the 1970s, the solo short follows Jess as she joins her friends at a party in a dilapidated mansion hosted by the mysterious Seth…when odd things begin to happen to Jess and her friends, can Phantom Stranger intervene? For fans that understand the character, it’s a nice slice of mystery pulled from the character’s classic comics. The short does little to explain who the Phantom Stranger is, so new fans may be lost. Peter Serafinowicz (The Tick) gives voice to Phantom Stranger, and Michael Rosenbaum (Smallville) provides the voice of Seth.

Cold Red War (16:57 in HD) – A new featurette that explores the Cold War through the lens of Superman: Red Son, as Superman rises to power and tension escalates between the United States and the Soviet Union. Mike Carlin and artist Dave Johnson of the original graphic novel appear in interviews, interspersed with academics discussing the period.

Superman: Red Son Motion Comics (06:03 in HD) – I believe this short with incredibly limited animation came out some years ago. It recaps the graphic novel in very brief fashion.

Justice League: A Better World Part I (21:42 in HD; 2.0 DD) – A two-part adventure from the animated series with Justice League counterparts from a parallel Earth confronting our Justice League.

A smart, if twisted, Elseworlds tale of Superman being raised in Soviet Russia during the Cold War, leading to him taking over the country.