The twist in this Jumanji sequel is that rather than kids, once in the game, Danny DeVito and Danny Glover take over Dwayne Johnson and Kevin Hart’s bodies (respectively). That’s fun. Johnson needs to put together a goofy east coast accent and Hart’s voice drops a few octaves. Playing against type, it’s entertaining.

In that, Jumanji: The Next Level is given room for a positive message. No one likes their new roles (the other parts switch too), but learning and having those experiences will make everyone better. But they don’t. Before the finale, a script cop-out puts the characters back into their familiar bodies. Nothing is gained. No lessons, no morals, no acceptance. Whine enough though, and you can get what you want.

Even in the “brain off,” escapist popcorn movie lineage, Jumanji: The Next Level isn’t trying

Jumanji: The Next Level’s greatest issue is the lack of connective tissue. A flimsy teen romance plays out in-game and DeVito/Glover deal with a rivalry, yet there’s no real drive. A jewel turns into a mindless McGuffin, partly playing to the retro videogame aesthetic. Action scenes break up monotony, rather than release tension or raise stakes. Even in the “brain off,” escapist popcorn movie lineage, Jumanji: The Next Level isn’t trying.

Scripting feels built around key action scenes, rather than the story giving them onus. At a different time, an ostrich stampede, monkey attack, and castle raid (with a blimp?) might bring some awe. That time was a decade (or more) ago. Jumanji: The Next Level treats effects for what they are: digitally routine set pieces with more value as trailer fodder than plot.

A few jokes work. Johnson is a delight. The positives die there. Bringing two generations together – one who understands videogames, the other unable to grasp what one is – that story device collapses when used for blatant exposition. Jumanji explained the basic rules, and The Next Level retreads territory. It’s not so much the information itself, rather the identical, stubborn, and forced delivery.

After cameras captured the first frame to the theatrical opening, Jumanji: The Next Level was completed in only nine or ten months. That’s abnormally low, leaving little room for script tweaks, reshoots, or editing. The end result represents the rush, lacking finesse, style, and character. It’s hopelessly bland, and although all-in for teamwork, resists the notion of stepping out from your comfort zone. 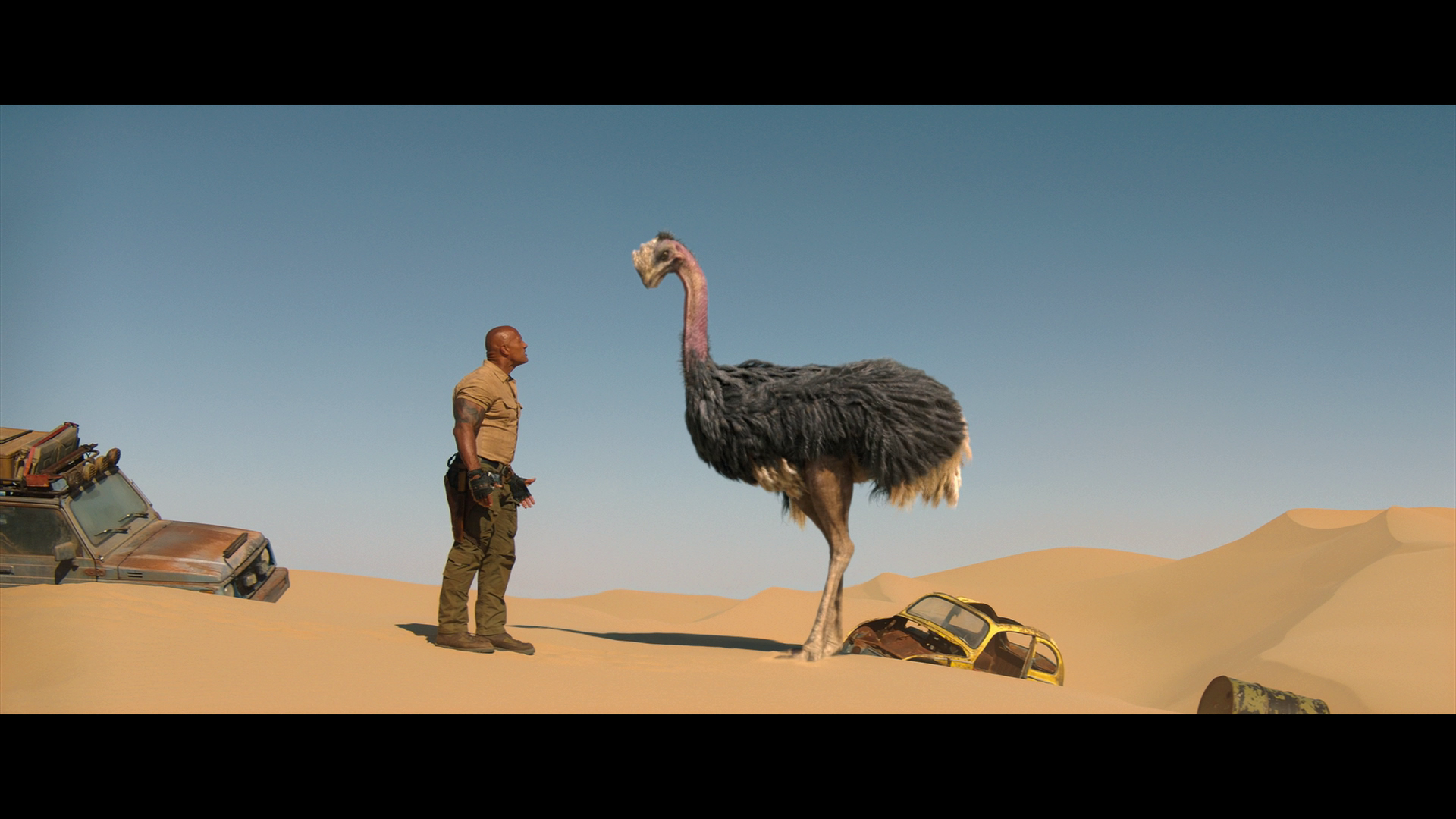 Were it not for HDR, this section would read differently. Instead, Jumanji: The Next Level pushes high-end brightness, more than typical standards. Partly set at Christmas, lights carry a definite sizzle, maxing out nits. Fire/torches likewise match those extremes, truly spectacular and pairing well to Goosebumps 2, another disc willing to use this tech to its fullest. Black levels work in tandem too, dense shadows everywhere and whenever needed.

Depth counts for a lot, and in this case, saves some otherwise dull imagery. Undoubtedly a 2K source, softness pervades. Detail is pure, from facial to costume texture. Kevin Hart’s adventure outfit sports numerous patches. Stitching stands out on all of them. Environments define too, if lacking in in sharpness. Slight ringing invades a few shots. With some certainty, the digital effects/backdrops likely play a role.

There’s a pleasant flow to the color palette, beginning with high saturation, and slowly moving toward restricted hues, like an orange/teal scene around a fruit tree. Then the finale brings snow and a predominantly monochrome blue. While jungle warmth, tree greens, and other sights create eye candy, Jumanji: The Next Level’s flow from one mood to another comes across naturally. Deep color helps too, doubly so at the end where the Blu-ray looks washed out compared to the dense, solid blues on UHD.

Sensational low-end use brings scale to this production. When a hippo strikes, its jaws close with full range bass. An ostrich stampede brings memories of Jurassic Park’s memorable scene, equally firm in LFE support too. Dwayne Johnson punches stuff with ridiculous power, and explosions use everything available. The only downgrade from Jumanji are the war drums before an action scene. While potent, the original added a deeper jolt.

Listen during the opening shots in a grocery store for DTS:X fun. Shopping music comes from the ceiling, filtering into other positionals. Those small touches matter, as with the wild action. While often busy (sound tends to blend without direction), each channel earns work and purpose. While the ostrich run overfills, a monkey attack sends angry screeches across the soundfield. There’s a give-and-take here. The ostriches produce the best bass, the monkeys the best surround use.

Flat EPKs sit on the Blu-ray (and nothing on the 4K disc). A 13-minute making-of doesn’t stray from the routine. Pre-vis is always interesting, while a gag reel is hilariously vulgar (if bleeped). Ignore the rest.

Jumanji: The Next Level

With limited story and a dismal message, Jumanji: The Next Level isn’t more than few setpieces of modern CG held together by Dwayne Johnson’s comedy.

The 15 unaltered images below represent the Blu-ray. For an additional 40 Jumanji: The Next Level screenshots, early access to all screens (plus the 100,000+ already in our library), 100 exclusive 4K UHD reviews, and more, support us on Patreon.