Jojo can’t yet tie his shoes. Yet, a Nazi youth camp teaches Jojo to use grenades.

That’s multi-layered dark comedy – exposing the desperation as the German regime faltered, mocking the egotism that drove a belief that Aryan children were more capable fighters than others, and how far propaganda embedded into the culture.

It’s not unfair to see Jojo Rabbit as ludicrously idealist. The war ends; Nazi youth and a Jewish girl dance together thanks to their newfound freedom. In Jojo Rabbit’s bubble, that’s asking a lot. Jojo Rabbit is not a mere bubble though.

The challenge in the satire comes from JoJo Rabbit putting a mirror on ourselves – in the now, not in the past. It’s a film centered on indoctrination and how preposterously easy it is for lies to spread. Jojo (Roman Griffith Davis) believes all Jews have horns, this while accepting how difficult it is to tell a Jew from a Nazi. In Jojo’s mind, he’s right on the cusp of understanding truth, but the ideology keeps infecting his mind.

If Jojo Rabbit intends to echo the now, the message is not all is lost

Most kids will have imaginary friends; Jojo’s is Hitler (played by Taika Waititi, himself Jewish, in a nod to Mel Brooks flawlessly insulting the Reich’s leader). Hitler is a permanent resident in Jojo Rabbit, speaking with a misshapen dialog that fits a child’s thinking. That’s belittling Hitler’s intellect for cause, while simultaneously describing how a kid processes such awful philosophy.

Jojo Rabbit doesn’t relinquish German fiction easily. The story subtly moves toward Jojo’s awareness, at first mournful, then dropping into a warzone where incompetent German forces find themselves slaughtered in their last days – by the very people Jojo was told were nothing. His light bulb moment is paired with a bomb going off, vaporizing years of disinformation. That’s what it takes.

No, a bomb doesn’t suddenly erase hate and racism. That’s Jojo Rabbit’s failing, even if the journey takes time. Watching Hitler kicked out of a window is satisfying though, and that optimism serves a purpose. If Jojo Rabbit intends to echo the now, the message is not all is lost. Kids can turn, good people still exist, and equality matters.

Over two hours, Jojo Rabbit conceals Hitler’s worst; that’s in the background, suggested, and if acknowledged, small in scope. That’s perspective at play, narrowed to what this kid can see, what he’s told, and what he trusts. Not everyone can move forward, or as easily, like Jojo. Youth can, if only they see through the veil. 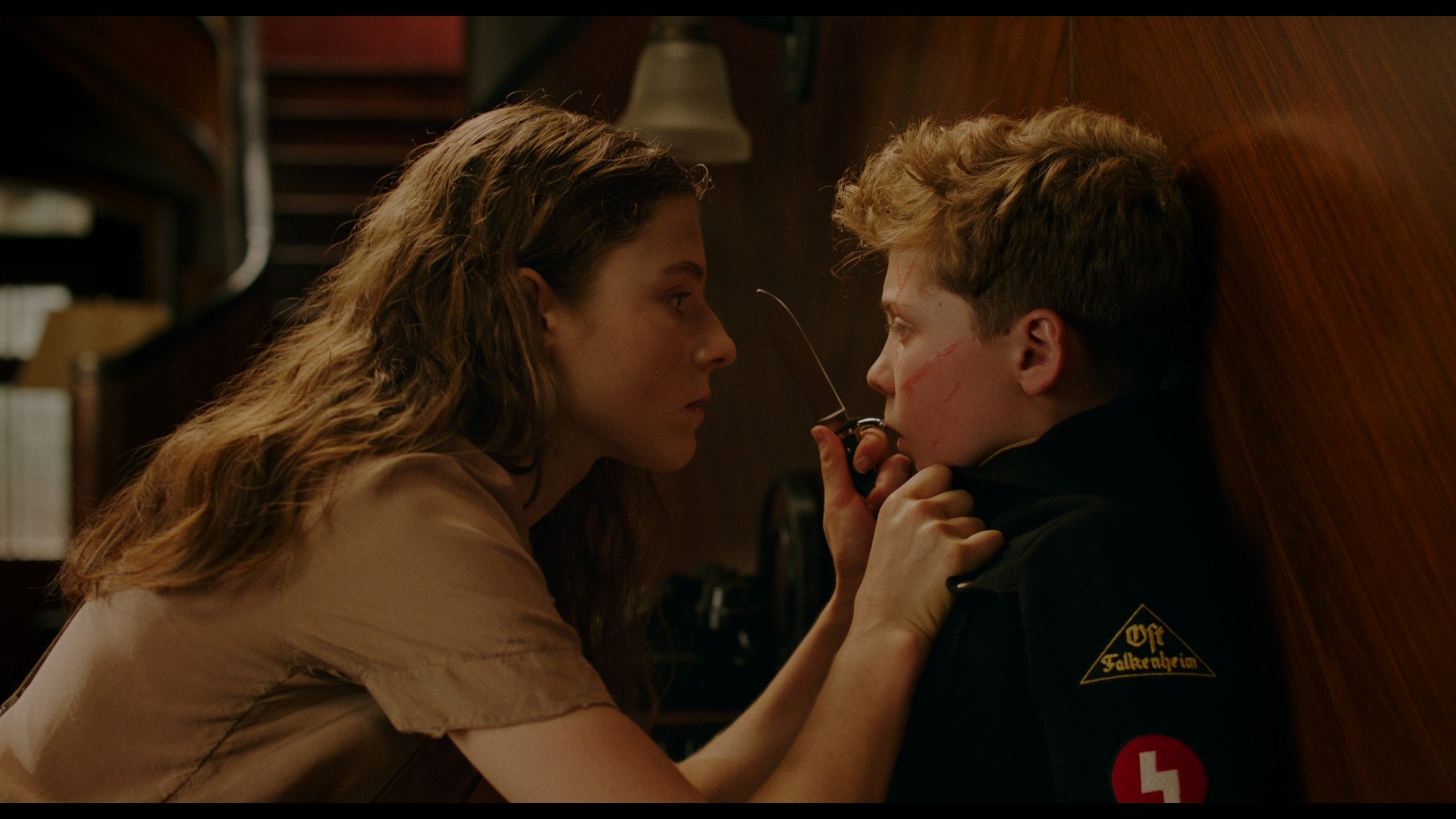 Shot digitally, a minor grain is added to the image, small and unobtrusive. The Fox-sourced encode handles this without issue.

2K mastered, detail is still sublime. Facial texture looks stellar. The German village and all of the concrete/brick buildings excel when in view. Even forests handle branches, bark, and leaves with zero struggle. Sharpness reaches a consistency, well resolved and pure. This is done minus sharpening or other artificial touch, leading to an organic image.

Minor HDR is the only letdown, giving fire some bite during a book burning. Highlights hit reasonable brightness. Black levels do okay too, if slightly (only slightly) elevated.

There’s not much straining this DTS-HD mix until the finishing act. A nice stereo split is notable as a German version of a Beatles song plays over the opening credits. The rest sticks itself in the center.

Then comes combat, with small bass signaling an air raid in the distance. It’s a constant blast when things hit their peak, from grenades to rocket launchers. Intensity satisfies the need for low-end output, helping to ignore the lull in surround activity.

On the UHD, writer/director/co-star Taika Waititi delivers a commentary. The Blu-ray holds deleted scenes, some outtakes, while a half-hour making of skirts EPK material, if never falling totally into that pit.

While everything closes too neatly, Jojo Rabbit reflects the now as much as the past in order to show there’s still hope.