A Hero to All

Ultraman creator Eiji Tsubaraya died before Return of Ultraman went into production; Tsubaraya’s son took over. In that sense, watching Return of Ultraman feels mournful since the elder Tsubaraya was integral to the series, and as special effects mastermind, key to Japanese sci-fi through his part in the Godzilla series.

Return of Ultraman turns into a celebration though, based in the franchise’s core identity. Led by a race car driver Go (Jiro Dan), this hero always puts others before himself. He ventures toward danger, pleading with others to do the same. At times, Go’s superiors chastise his aggressiveness, but he’s always thinking of how his actions affect others, sometimes to a fault.

In an early episode, Tokyo turns to rubble when under attack by two monsters. Go’s government higher-ups in MAT (Monster Attack Team) consider napalm and nuclear weapons. When being a hero, Go takes it upon himself to stamp out Japanese militarism, taking the fight himself without putting a population at risk.

It’s important Go isn’t always right. For that, he’s under supervision by Ken Sakata (Shin Kishida, memorable for his role in Godzilla vs Mechagodzilla), the archetype sensei who, akin to kung-fu cinema, brings Go in line both sensibly and morally. Return of Ultraman teaches as much as entertains, depicting superheroes as flawed if pure beings, defending the mainland from attack yet deviating from WWII’s combative Imperialism. One episode concerns leftover gas developed during the war, the monster representing the conflict’s lasting generational impact.

Go being a racer suits Japan’s changing economy during the period. It’s a rusty-looking show, and cities (miniature and real both) appear dirty, even rundown with soot. Rarely is Return of Ultraman beautiful, focused on this working class mechanic who chooses MAT while still fixing cars on his days off. Prior to the looming oil crisis, this was Japan, engulfed by industry, afflicted by pollution, and leaning decidedly toward western capitalism.

Of course, the stories follow a Saturday morning pattern. Monster-of-the-week appears, MAT fights back, MAT loses, in comes Ultraman to save them all. It’s weird, surreal, and wacky, if gorgeously crafted on minimal budget. Return of Ultraman encapsulates Japan’s golden era sci-fi, intricate in miniature scale, and paying tribute to Tsubaraya’s own lasting work. For every moment in which Return of Ultraman turns toward the surreal, it’s equally jaw-dropping in showing cities designed, built, and painted to their smallest detail, but at a fraction of their actual scale. Return of Ultraman embodies this franchise’s core ideals and values. 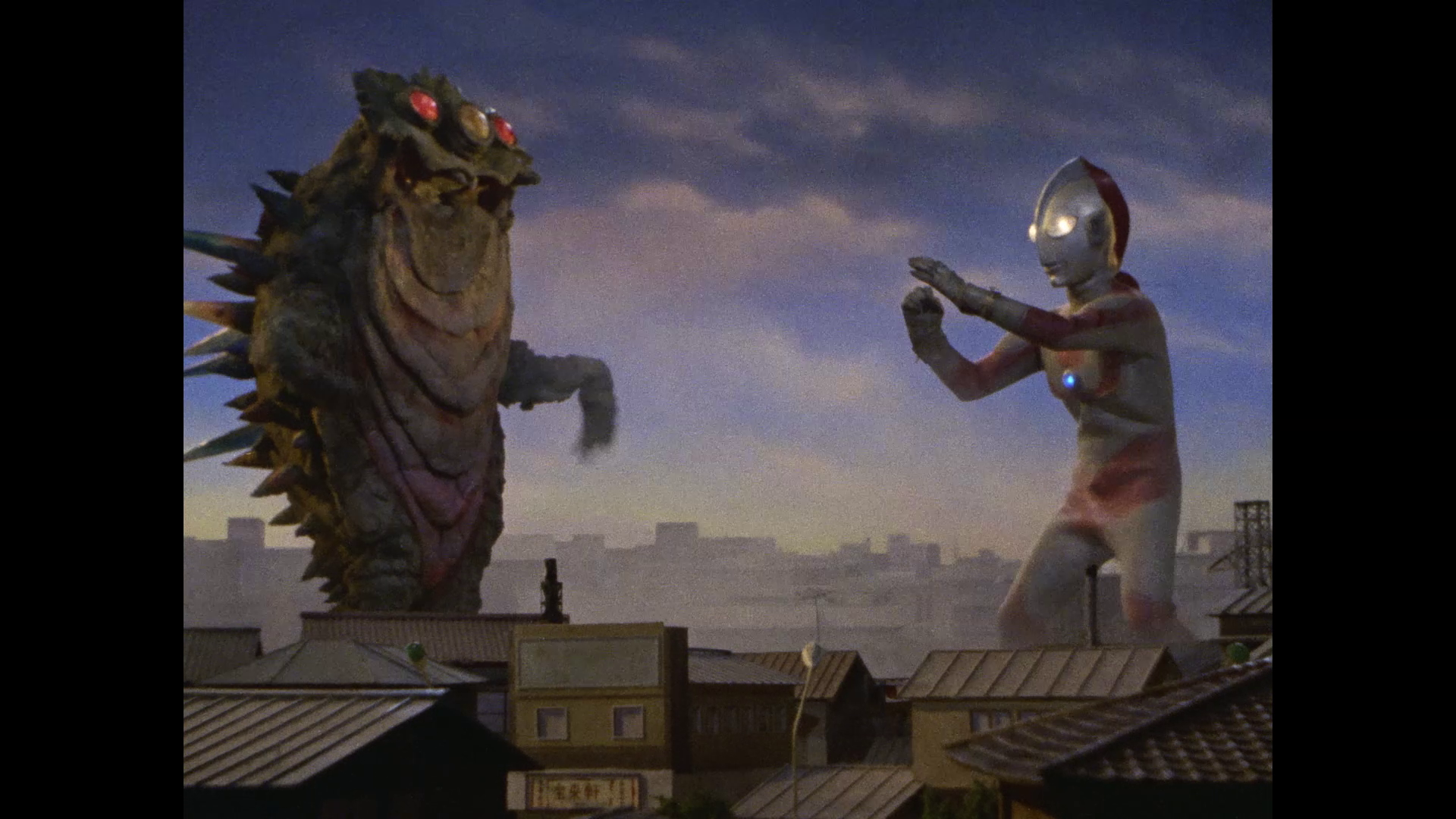 The let down then is Mill Creek’s compression, leaving extreme artifacts behind. 16mm transfers require a steady hand when digitizing, of which this set doesn’t do. Return of Ultraman lacks the film-like aesthetic, instead delivering something clearly digitized. Grain never looks like grain. This saps the potential for further high-fidelity detail, hampering mid-range images, and robbing wide shots. Hectic action with dust or smoke – of which Return of Ultraman is fond of – adds to the blocking.

Sadly, as with past Blu-ray releases, the DTS-HD track mixes in modern sound effects. It’s distracting. Where the nostalgic Toho sound library sounds naturally faded (pleasingly so), the new touches distract with their clarity. It’s akin to hearing two separate mixes play at the same time. Additional bass comes through loose and flat.

Slightly worn dialog and music represent the original audio perfectly, high in treble, yet free of distortion or problems.

Mill Creek includes a full color booklet inside the case. That’s informative and well written, but also the only bonus.

While restrained and redundant, Return of Ultraman keeps up the energy with a flawed hero saving Japan from numerous beasties.

The 15 unaltered images below represent the Blu-ray. For an additional 19 Return of Ultraman screenshots, early access to all screens (plus the 100,000+ already in our library), 100 exclusive 4K UHD reviews, and more, support us on Patreon.