The indulgent storytelling, running nearly two and a half hours, knocks a little luster off the star-laden cast. Baldwin chews the scenery as a tyrannical real estate developer, a man that de facto controls New York City behind the scenes.

The quirky detective story ultimately proves satisfying, if a tad predictable and less clever than it hopes to be in the end. The sprawling plot weaves a tale of NYC corruption and Harlem night clubs adapted from Jonathan Lethem’s novel “Motherless Brooklyn”, winner of the 1999 National Book Critics Circle Award for fiction.

… Edward Norton’s Motherless Brooklyn isn’t quite the masterpiece he wanted but offers an effective noir mystery.

Set in the 1950s, a detective (Norton) badly afflicted with Tourette syndrome investigates the murder of his boss and mentor. He slowly unravels closely guarded secrets that lead up to the shadowy power brokers that run New York City. What secrets could unhinge the corrupt men that control development in the city?

Norton embraces his character’s Tourette syndrome with relish, spewing obscenities and nervous tics into a performance that is always “on” and a constant presence. It’s definitely a showy role made for recognition, though can grate as the movie unfolds. What it does is inject some levity into the otherwise slinky noir mechanics.

Motherless Brooklyn’s romance plays a critical role, fueling many of the plot twists. The detective starts tailing a young black woman (Gugu Mbatha-Raw) fighting to end racial discrimination in NYC’s urban housing, uncovering a raft of corruption and vice at the highest levels of city government. That leads to a detour through Harlem and sweet jazz music played by Wynton Marsalis.

Edward Norton’s Motherless Brooklyn isn’t quite the masterpiece he wanted but offers an effective noir mystery. The convincing gumshoe whodunit pays beautiful attention to period detail and uncovers the real story of how New York City was built. Some may call it a vanity project but Norton’s heart is in the right place, pulling off a decent film. 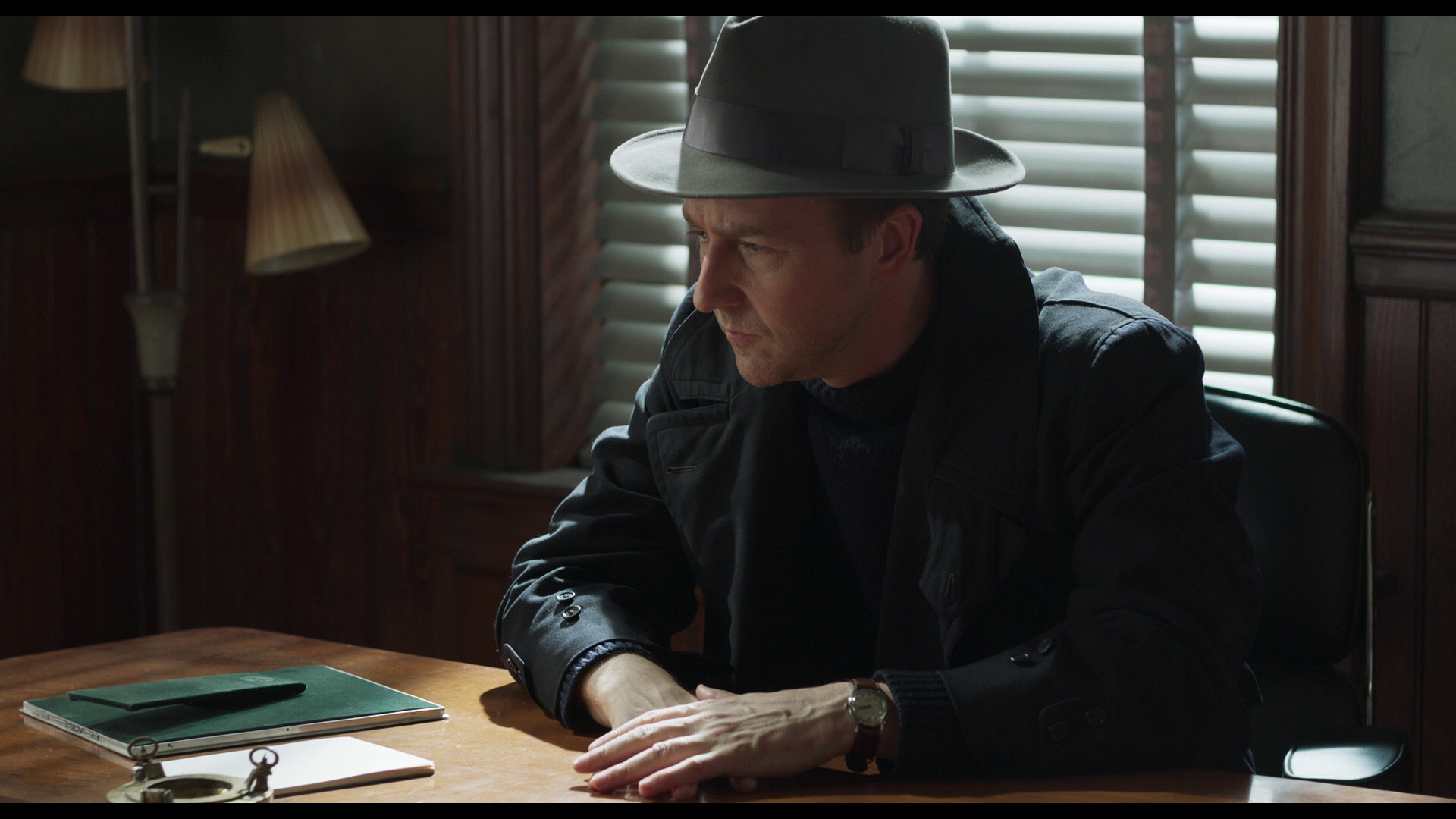 The immersive cinematography by Dick Pope (The Illusionist) plays an important role in setting tone and establishing the period of Motherless Brooklyn. WB’s Blu-ray offers nigh perfect video quality.

The transfer reveals incredible definition and razor-sharp detail at 1080P resolution. Taken from a 2K digital intermediate, its vivid and masterfully refined color palette would have looked gorgeous on UHD with an HDR pass. This is a stunning 1.85:1 presentation of some beauty.

WB’s AVC encode deftly handles the long movie’s demands. The main feature runs 144 minutes, spread over a BD-50. Transparently replicating the movie’s impeccable DI, there isn’t an artifact in sight. Flawless and pristine, the rich contrast and silky smooth black levels are the stuff of a videophile’s dreams.

An eclectic and interesting score by composer Daniel Pemberton with nods to jazz and atmospheric sound dominate the fine 5.1 DTS-HD MA audio. Motherless Brooklyn’s main theme song by Thom Yorke is played by Wynton Marsalis and jazz music is a constant presence in the script.

WB includes a slipcover for early pressings. All copies have a Movies Anywhere digital code that redeems in HDX quality. A commentary and a couple of short special features round out the Blu-ray package.

Audio Commentary with Director Edward Norton – Writer/director/producer and star Edward Norton gives a thoughtful discussion of the project. Some dead air but the actor gives insightful commentary on why he took this project, adapting the novel and changing periods, working with cast and crew, and his appreciation for the history involved.

The 15 unaltered images below represent the Blu-ray. For an additional 39 Motherless Brooklyn screenshots, early access to all screens (plus the 100,000+ already in our library), 100 exclusive 4K UHD reviews, and more, support us on Patreon.