The Santa Clause 2 might be the oddest way to teach kids about fascism. Decking Santa out in vaguely German-garb as he marches subservient robot soldiers into the toy factory and enslaves the elves to mine coal is definitely a thing that happens in this movie. A perfect holiday story… somehow.

Yes, that’s looking at The Santa Clause 2 from an extreme, if one hard to miss. The sequel does what sequels need to do – stepping up in boldness, action, and world building. It’s wackier too, as if cloning Santa wasn’t enough. The opening scene finds the elves trying to hide from a plane, alerting the North Pole via a colored warning system akin to the terrorism alert system employed after 9/11. Fascist Santa doesn’t seem so out of place afterward.

After The Santa Clause, the series grew up a little

This is a romance movie, by the way. In fairy tale style, Santa (Tim Allen) needs to find a Mrs. Claus or he ceases to be Santa. He picks his son’s strict school principal (Elizabeth Mitchell) and begins making magical moves on her – literal magic. After The Santa Clause, the series grew up a little. Logic says young kids who saw the first will find a romantic story of some interest given the eight years between the original and follow-up. Still, Santa Clause 2 isn’t afraid of gunning for fart jokes too.

Santa and wife-to-be become discipline-opposite; Santa uses a softer hand, Mitchell demands detention for each infraction. Santa Clause 2 bridges the two. Kids will be kids, but use that for moral lessons rather than punishment. Mitchell’s methods transfer over to that rogue Santa who, by sticking to the rules, refuses to bend and sees any mishap as cause for coal. Understanding matters more than a checklist and fear, a lesson Santa Clause 2 projects with smart screen writing insofar as being aimed at kids.

After a touching scene where Santa finds gifts for bored teachers at a Christmas party (they all get the toys they wanted as kids), things pick up. Visual effects show dueling sleighs and a town brawl where tin soldiers meet their fate. It’s loud and boomy, probably aimed at making up for the mushy love stuff earlier. Better clashing reindeer than a wedding, although Santa Clause 2 has one of those too.

Christmas is saved, for most anyway. There’s one person still lingering. “Charlie Sheen? I thought he straightened out!” says Santa when looking at the naughty list. And this was 2002. What does Santa think now? 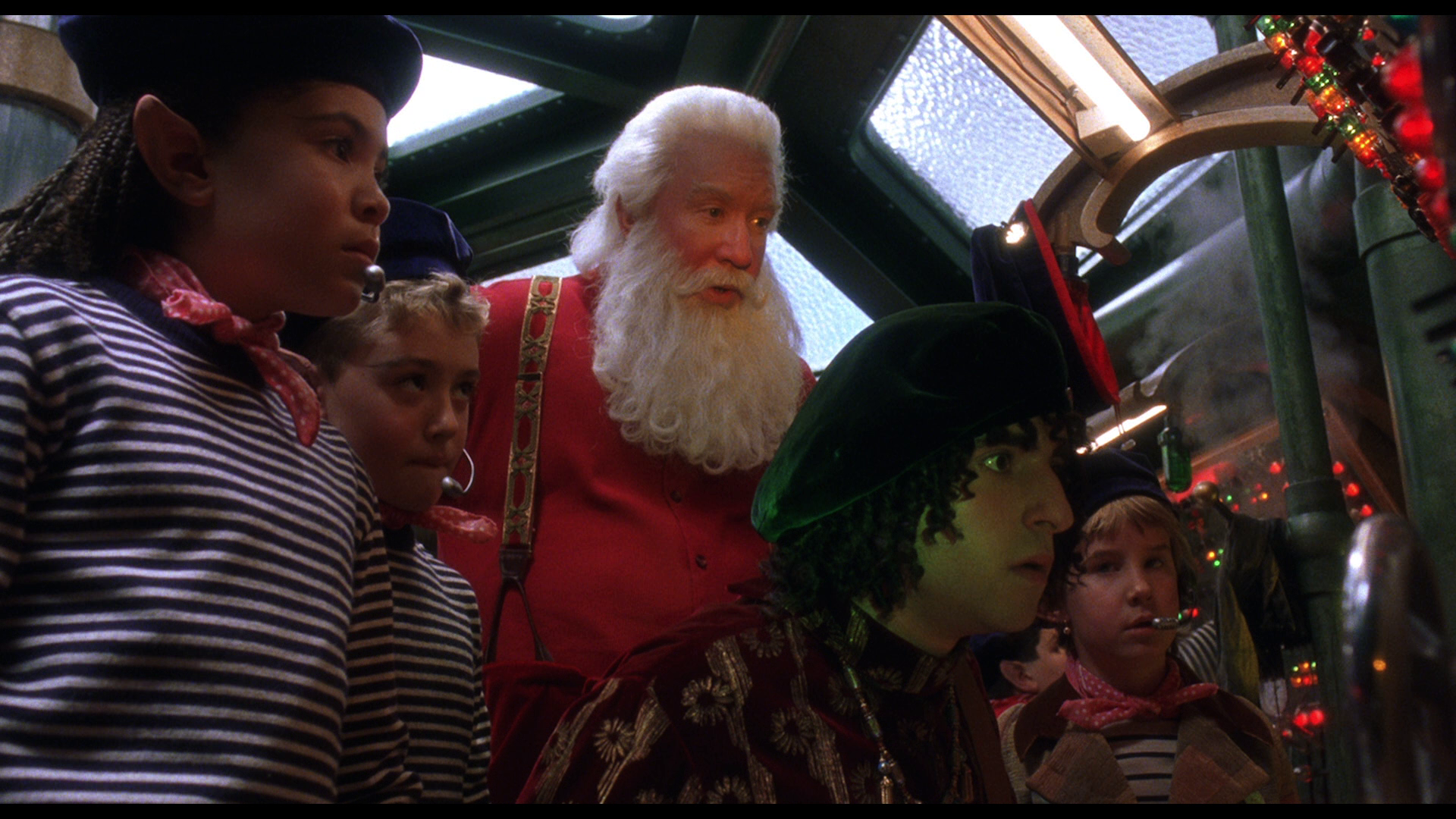 With seemingly little interest, Disney drops The Santa Clause 2 onto Blu-ray. Soft imagery and muddy detail barely qualify this one for HD; it’s skirting a line between unacceptable and tolerable.

The film stock brings hefty grain into play, handled poorly with chunky noise. Encoding does what it can, but sub-par mastering only allows so much texture through. Mostly, that happens in close-ups, if not with consistency.

In DTS-HD, spectacular LFE keeps up with the action. When toy soldiers march, each step resonates with power. Earlier, a plane flies by, engines generating firm, tight rumble. In-between the two, the cloning machine revs up through an electrical hum. Add in support from the score and this mix pushes intense bass.

Surrounds do well too, if not as notable. Panning objects travel channel to channel, with active motion. Stereos split wide, with flying reindeer passing front to back unopposed. The final chapters involves air and ground battles, mixed well and precise.

Mostly aimed at kids, a set tour with actor Spencer Breslin runs nearly 10-minutes. An in-character interview with Mother Nature lasts three minutes. Director Michael Lembeck, in addition to offering a commentary track, features in a walk-through of the Elfburg set, but in-character. Seven deleted scenes and a short gag reel round things up.

The 15 unaltered images below represent the Blu-ray. For an additional 19 Santa Clause 2 screenshots, early access to all screens (plus the 100,000+ already in our library), 100 exclusive 4K UHD reviews, and more, support us on Patreon.