The In-Laws Are Coming

While a retread from the previous Santa Clause films, watching Santa fall back to middle suburbia and deal with his in-laws fits this series. It’s Alan Arkin, playing the father-in-law, who makes this work without feeling repetitious.

Santa Clause 3 pulls Arkin in to deal with disbelief via sitcom humor. Kids won’t see that though, instead focused on the mild villainy of Jack Frost (Martin Short). And, the lesson that all families irritate each other; that’s normal, and that’s part of Christmas.

The story wraps around to the first Santa Clause, bringing back the commercialization angle, albeit in a direct way. Frost turns the North Pole into a tourist trap and Santa doesn’t deliver gifts under his control. Rather, the rich fly up to get them. This brings ungrateful kids and ignites infighting, broadly drawing the lesson and anti-capitalist morals in a way kids will understand.

Plus, there’s domestic turmoil. An overworked Santa (Tim Allen) balances family and his job – not well, either. Again, it’s sitcom material, but energized by the fantasy world and the absurdity that allows. Although dealing in pregnancy, romances, and family issues – doomed to bore the target audience – Santa Clause 3 avoids a brutish action finale. Santa Clause 3 ends with an oddly softened touch. No sleigh brawls or loud arguing as with Santa Clause 2. This is a sweet, tender ending to this series that sticks an age-appropriate ending. Martin Shot even downplays his usual humor, and is a joy.

Pulling Tim Allen’s Santa out individually, Santa Clause 3 gives this character a complete arc. He’s come to see his place in the world, not as a corporate mouthpiece, but giver of things. Those things matter because they bring people together, not only because they’re piles of stuff. It’s sappy, but so is this series as a whole; Santa Clause 3 rests on the franchise’s head as the perfect hat.

There’s no avoiding the kookiness, the corniness, or the cheapness (Elfsburg is obviously an indoor set). Santa Clause 3 is harmlessly enjoyable holiday fodder. Some 13 years on, with Christmas bombarded by Hallmark’s regurgitated fluff, at least The Santa Clause carries a spark of creative energy while imbuing the youngest viewers with appropriate seasonal lessons. 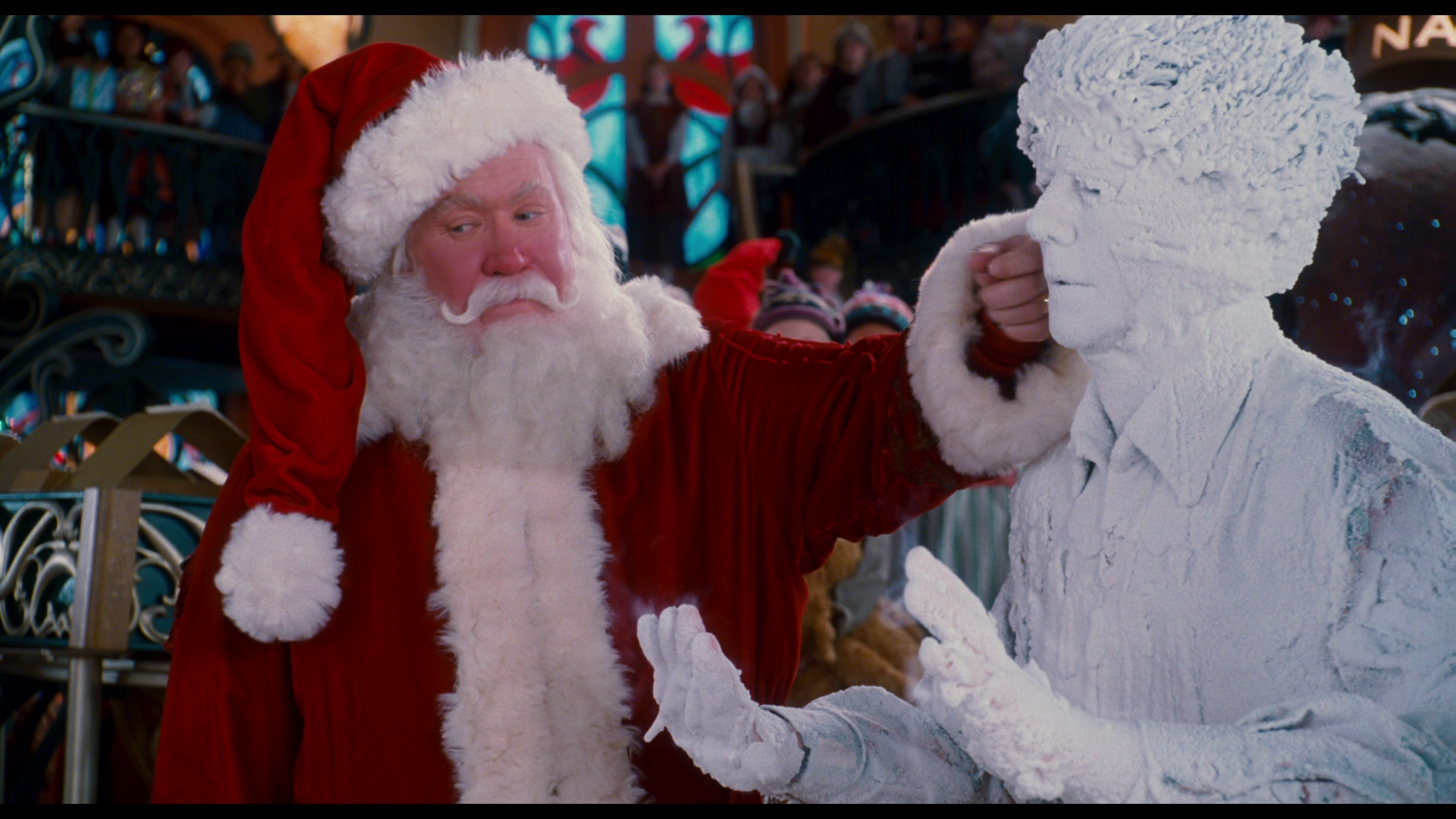 Disney never updated this transfer since its debut early on in Blu-ray’s life. Re-packaged inside a Disney Movie Club-exclusive trilogy set, the disc uses VC-1 for its codec. That’s a shame since the rest looks great. VC-1 cannot handle the grain structure. While not the most invasive, grain digitally sways over the image, creating a light smear, sucking out finer detail.

This covers a heavily saturated presentation, the only one of three to draw out primaries to where they need to be for a movie like this. Christmas colors find their extremes, without going overboard. North Pole scenes swim in holiday hues. Jack Frost’s blue and Santa’s red make for easy viewing.

Mostly backed by snow, contrast is always high. Depth becomes a highlight, lively throughout. Where needed (and that’s not often) black levels hit their marks. Combined with pleasing resolution, Santa Clause 3 looks fantastic – aside from the lackluster codec.

In PCM, the audio mix comes to life with no real faults. It’s active, always, swirling around to capture action or magic. Ambiance at the North Pole is more than a layer of voices. Specific sounds take their place in rear speakers or even stereos, keeping things lively even during dialog. The score stretches outward too.

Even dynamic range comes to work. Machinery or motors push deep into the low-end. Chaos in the workshop shoots to the subwoofer with exceptional weight. It’s refreshing to hear a Disney mix that isn’t a mess given their 2019 output.

The better of the two sequels, The Santa Clause 3 brings the series’ themes to a proper close, even if the humor only rises to a sitcom level.

The 15 unaltered images below represent the Blu-ray. For an additional 14 Santa Clause 3 screenshots, early access to all screens (plus the 100,000+ already in our library), 100 exclusive 4K UHD reviews, and more, support us on Patreon.