Dracula is a fluid character that adapts with the times, changing for each new era in Hollywood. That was never more true than John Badham’s Dracula. Released near the end of the 1970s, Frank Langella reprises his charismatic Broadway portrayal as the commanding Count Dracula for the silver screen. This time the immortal vampire comes to London and finds love, hounded by Professor Van Helsing. In the twilight of his great acting career, the esteemed Sir Laurence Olivier plays Van Helsing.

Directed by John Badham (Saturday Night Fever) with a style firmly aware of wider cultural trends in the decade, his Dracula casts the fearsome vampire as a romantic leading man with a superb cast, accompanied by a rousing score from master composer John Williams. Donald Pleasence as Dr. Seward, Kate Nelligan as Lucy, and Trevor Eve as a hopelessly outclassed Jonathan Harker are supporting players.

The moody adaptation was met with a mixed reception upon release, possibly due to the high expectations set by the impressive cast and studio pedigree. There has always been a romantic subtext to Dracula as leading man once Bela Lugosi and Christopher Lee took their memorable turns as the Count. The screenplay by W.D. Richter flips Bram Stoker’s story on its head and makes that romantic cunning overt. Langella cuts a dashing figure when he isn’t transforming into a bat or crawling up castle walls. While he’s still a ruthless and feared villain, even the king of the vampires can get lost in love. It’s an idea explored even further in Coppola’s Dracula.

Lucy is smitten when she meets the dashing Count Dracula, the mysterious foreigner from Transylvania. She’s currently connected to the aloof Jonathan Harker, employed by Count Dracula to handle his business affairs in London. As unexplained deaths begin happening around Lucy with two bite marks to the throat, the elderly Professor Van Helsing steps on the scene. Van Helsing and Dracula are on a collision course that may leave both of them dead.

Loaded with atmosphere and a string of great performances, Badham’s Dracula has always been curiously underrated. Horror audiences in 1979 were probably not ready to see Dracula develop a real relationship with Lucy, practically stealing her from the hapless Harker. Lucy is an early example in horror of a liberated woman making her own choices, even if those choices are disastrous.

Audiences back then probably weren’t ready for the movie’s signature scene – a weirdly lit psychedelic love scene between Dracula and Lucy with pulsing strobe lights. Badham borrowed the powerful stage lights from the Who when shooting the scene, feeling over-the-top and out of place even today. The scene sticks out from the rest of the film, a stylistic mistake in what is otherwise a masterfully haunting tone. The vampire make-up for the young Mina is truly frightening.

One of the most different interpretations of Bram Stoker’s legendary character, Dracula delivers unrestrained Gothic terror with a completely fresh understanding of the vampire. 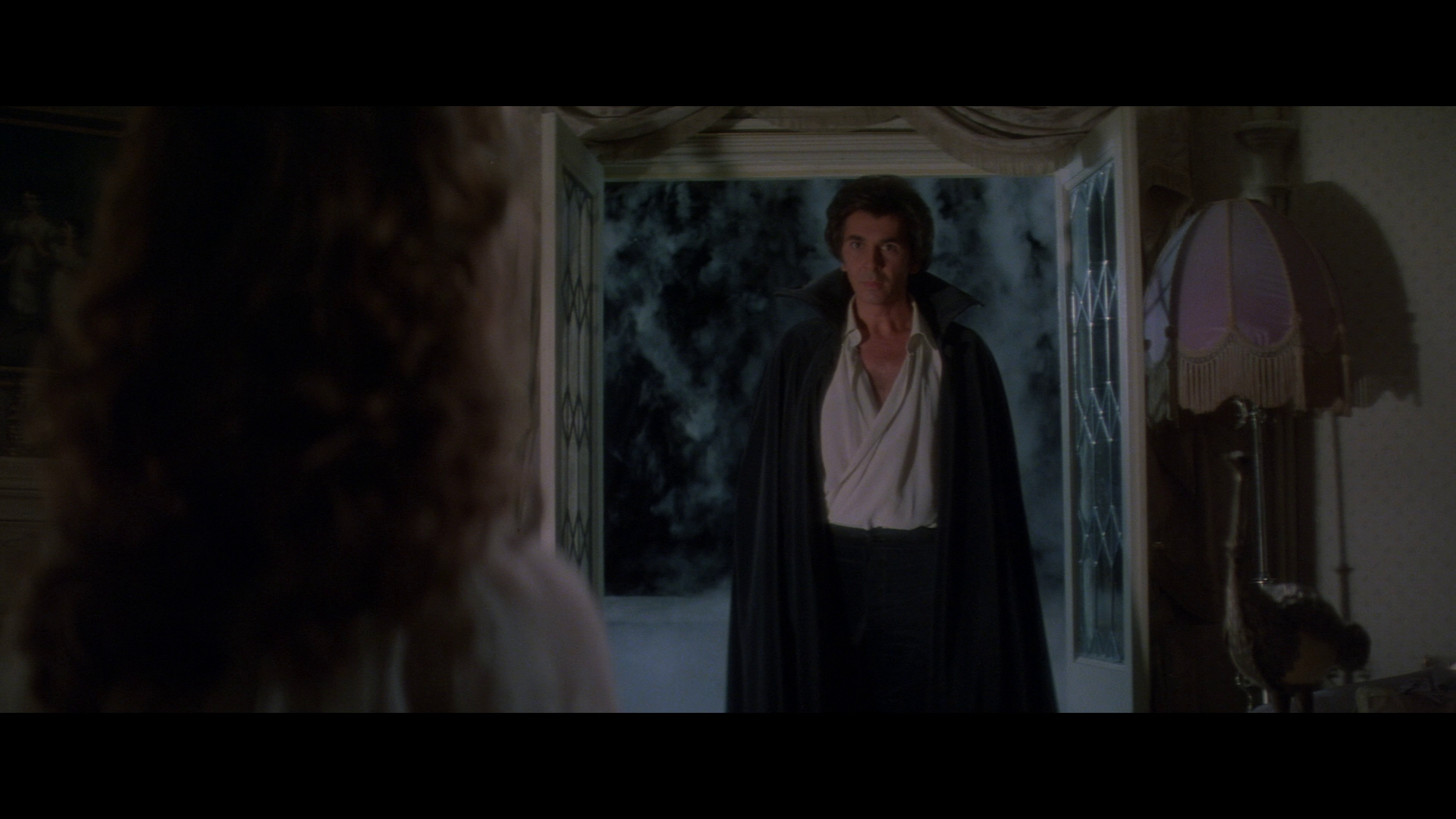 A great wrong has finally been rectified by Scream Factory. Some years ago after the movie had been released director John Badham got it in his head that Dracula’s color needed toning down, emulating the nearly black-and-white aesthetic favored by the 1976 stage production. His preferred desaturated color palette for Dracula replaced the original theatrical color timing on home video, a much more traditional palette with bloody reds and healthy flesh-tones. For years, that desaturated timing was the only version available on Blu-ray, first released by Universal.

This collector’s edition fixes that mistake by including both versions, this time giving each their own BD-50. Disc two presents the original theatrical color timing with a healthier contrast and livelier color, taken from a new 4K scan. Badham’s desaturated color timing goes too far, practically crushing shadow delineation into darkness. It resembles a black-and-white film with few bright highlights. Many fans were up in arms with Badham’s revisionist color grading when it first appeared and thankfully the theatrical color has been restored in this Collector’s edition.

The film elements are in stable condition with a few signs of wear and age. The scan does seem to grapple with a little telecine wobble and jitter during one reel late in the movie. The 2.35:1 presentation has fine grain reproduction that is eminently film-like, if slightly processed with a few bursts of mushy grain structure. Definition and clarity are solid for the 1979 film. Detail is excellent for interior scenes, while outdoor scenes are mildly softer. The gritty Panavision cinematography is not anyone’s idea of videophile nirvana but provides gritty picture quality intended by the filmmakers.

Each version receives a thorough AVC encode implemented with top-notch parameters, smoothly handling the occasionally rough grain and other darker scenes. Both versions of Dracula earn film-like transfers, even if the desaturated version has murkier picture quality with limited black levels.

One of Dracula’s most singular features is the atmospheric score by composer John Williams. Having scored a string of memorable Hollywood soundtracks during the ’70s, his eerie score for Dracula sounds familiar and comfortable with any number of signature motifs from the composing icon. It’s not up to par with his most heralded work on such classics as Superman or Star Wars, but delivers musical thrills and frights for this romanticized version of Dracula.

The 2.0 DTS-HD MA audio in stereo has a slightly congested feel to its dense atmospherics, expanding the soundstage for wolves howling in the distance and other horrifying sounds. The score is heard in decent dynamics with full frequency response. There are no issues with the dialogue. While a remix from the original audio stems would be wonderful and probably bring out better quality, there’s nothing overtly poor in this stereo mix. One wonders why Universal hasn’t bothered mixing Dracula for surround if the original audio elements still exist.

Optional English SDH subtitles are provided in a white font for both versions of the movie. They play inside the scope presentation at all times.

Scream Factory pulls out all the stops in this absolutely essential collector’s edition for Badham’s Dracula. Besides the exclusive HD transfer of the film’s original color timing, they port over the special features from Universal’s original BD on top of many new interviews and featurettes. The new audio commentary by historian Constantine Nasr is a wonderful addition. This release completely supersedes the prior BD from Universal.

The two-disc collector’s edition arrives with a slipcover and reversible cover art. The newly commissioned artwork comes from artist Mark Maddox (Dracula: Prince of Darkness). The reverse side of the wrap features the original theatrical artwork.

About the only thing missing here is a collector’s booklet or an isolated audio track for John Williams’s score, though Shout Factory prefers video-based special features. The first 500 orders from Shout Factory’s site will receive an exclusive limited-edition 18” x 24” rolled poster of the exclusive new illustration. On a side note, John Williams’s complete score for Dracula was released as a beautiful 2-CD set in 2018.

Audio Commentary with director John Badham – An older commentary from the original BD.

Audio Commentary by film historian/filmmaker Constantine Nasr – A new and engaging solo discussion of the movie by someone very familiar with its history.

Introduction by director John Badham (01:10 in HD) – Badham introduces his reasoning for the desaturated and revisionist color timing.

King of My Kind – an interview with John Badham (32:18 in HD) – A thoughtful, extended interview with the director covering the movie’s production, casting and other topics.

The Revamping of Dracula featurette (39:12 in SD) – The original making-of documentary taken from the original DVD and Blu-ray editions.

The 15 unaltered images below represent the Blu-ray. For an additional 32 Dracula screenshots, early access to all screens (plus the 100,000+ already in our library), 100 exclusive 4K UHD reviews, and more, support us on Patreon.