Ready or Not’s best moment in the first act shows how overwhelmingly uncomfortable Grace (Samara Weaving) is. She’s a newlywed staying at her in-law’s mega mansion; the entire family stares down at her in disgust. They make crude remarks, judging Grace for being a foster child. She’s not rich. They are.

With violent, comical morbidity (in line with Cabin in the Woods), the theme in Ready or Not is class division. The rich, deeply conservative family Grace marries into have no real world conception. They respect tradition, insofar as they keep their money. Their own selfishness and isolation make it seem okay to play hide and seek – one where the one picked to hide is hunted to the death.

The idea isn’t new. The Most Dangerous Game brought human hunting to the screen back in the early ‘30s. But like The Hunger Games, it’s a story reformatted for the now. And rather for teens, Ready or Not aims strictly at adults. Bringing frustration and angst over the wealth gap, the framing makes Grace the hero purely for her rational worldview. In contrast, the rich believe they make the rules, and never show empathy or fear toward the growing body count they cause. Worse still, they all hate one another; they stick around for the money.

Away from Ready or Not’s ferocious satire, it’s still charged and energetic

There’s a religious basis working against Grace too. The Le Domas family perform this ritual because generations ago, an ancestor made a pact with Satan; they fervently believe it too. Like everything in Ready or Not, this too plays out intelligently. It’s absurdist enough to be true and reasonable enough to conclude the Le Domas’ sold themselves to evil to stay socially affluent. Usually in a horror slasher (a genre Ready or Not falls into, among others), the questions lie entirely on who lives. Here, that’s layered with a number of “maybes.”

Away from Ready or Not’s ferocious satire, it’s still charged and energetic. Weaving is superlative, supported by Andie MacDowell and Nicky Guadgni as the Le Domas standouts. Kills increase their ludicrousness in time, and rarely without a twisted smirk.

Grace does eventually make it off the grounds (if not to safety), squeezing through the front gate. A car pulls up, Grace screams for help, and the driver tells her to get off the road. In this neighborhood, the only thing that matters is yourself, not the woman whose wedding dress is soaked in blood, pleading for help. Ready or Not makes Grace a perfect outsider in an insular society. 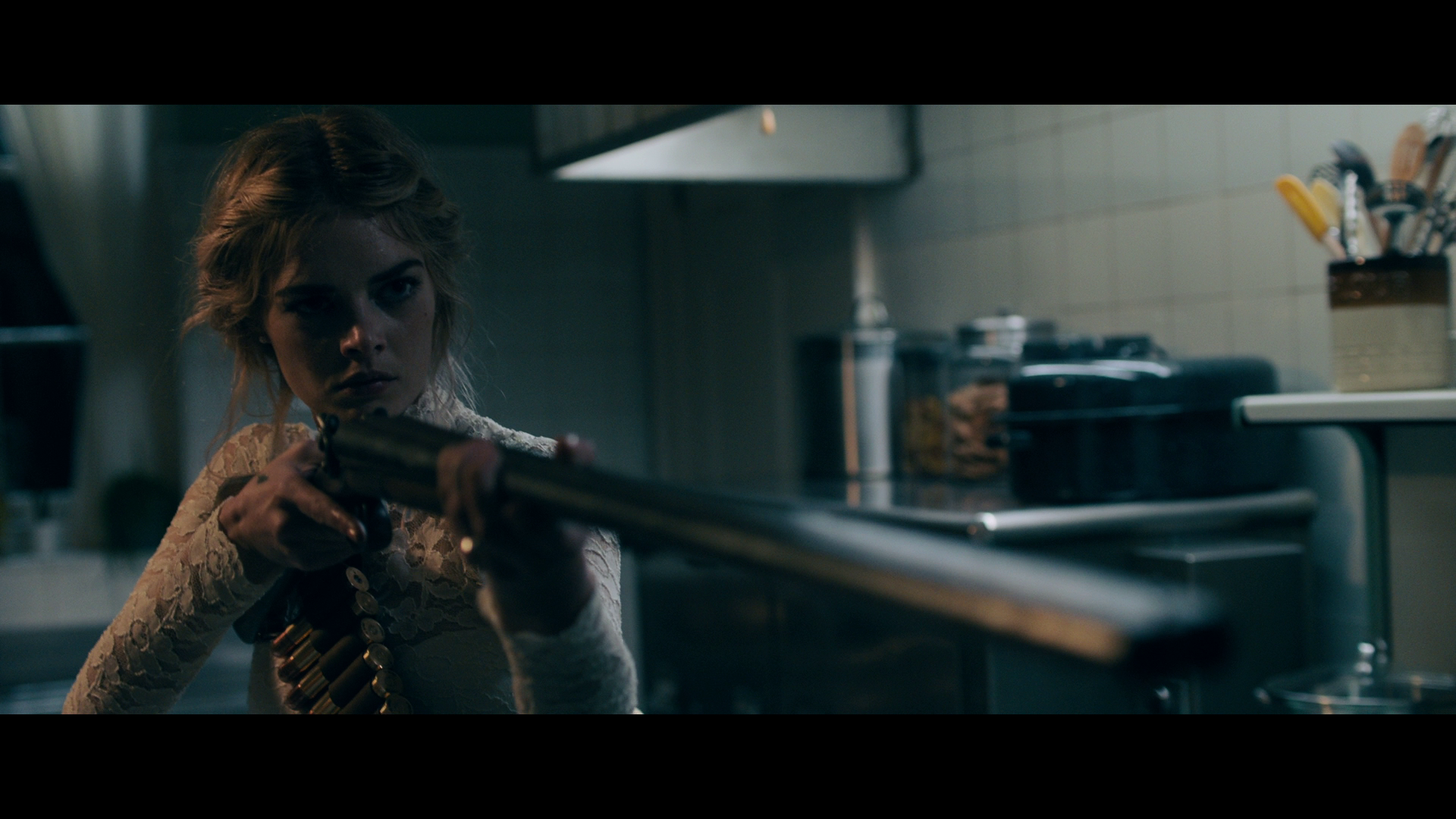 Graded with a rather ghastly green and yellow palette indoors, Ready or Not does not aim for attractiveness. That’s kind of the point though. Grace, like the audience, is never meant to feel comfortable. Other than the book-end scenes, expect no accurate flesh tones and no real primaries either. It’s garish.

In short, Ready or Not captures the source, but this one calls out for a 4K release.

Fair positional touches give life to this DTS-HD track. Doors will close or open in a surround for atmosphere. That’s successful. Exterior rain catches each channel, thunder claps too. Key is keeping Grace at the center, and that’s the case here.

Decent if unremarkable range will use the subwoofer on occasion. A gunshot will pass quickly but with impact. Thunder works the same way. The strongest moments happen at the end, but that’s too much a spoiler – a few “explosions” leave their sonic mark.

The making of runs 42-minutes, split into three parts. For a new release, this is great stuff, delving into the concept, tone, casting, and more. A short gag reel doesn’t offer much afterward, although the commentary brings Samara Weaving, co-director Tyler Gillett, and producer Chad Villella together for laughs.

A riotous class satire, Ready or Not brings pitch black humor to a story of rich versus poor through a clever script.

The 15 unaltered images below represent the Blu-ray. For an additional 16 Ready or Not screenshots, early access to all screens (plus the 100,000+ already in our library), 100 exclusive 4K UHD reviews, and more, support us on Patreon.