Ben Braddock asks for a bourbon. Mr. Robinson pours him a scotch. That happens twice in The Graduate, seemingly an insignificant touch. The camera doesn’t take special notice, and Braddock doesn’t fuss. Yet everything about The Graduate is in those drinks.

No one listens to Braddock (Dustin Hoffman). There’s a generational distance between baby boomer parents and their kids, arguably a greater separation than any prior. When Braddock returns to Los Angeles from an east coast college, his parents expect him to enter an industry. A family friend pulls Braddock aside and invites him to join “plastics.” Just plastics. Braddock walks awkwardly away, stiffened and bored by the possibility.

It’s a child of conservatism – graduate, get a job, marry – in a city flaunting liberalism – rebel, change the system. There’s an uncomfortable shell around Braddock; his parents keep him there, visually realized when they stuff him into a wet suit to entertain friends. Inside, he can’t hear anything they say. Their advice and their experiences are no longer relevant in this changing time, and their voices silenced.

The Graduate, a subtle suggestion of the progress about to happen culturally as much as to Braddock

The Graduate is about sex, freely so. Awkward and out of place, but drawn to something that gives him life, Braddock’s affair with Mrs. Robinson (Anne Bancroft) loosens the national puritanism’s noose. Mrs. Robinson unshackles herself from judgment, much as she brings this 20-something into adulthood. “We’re about to begin our descent to Los Angeles,” is the fist spoken line in The Graduate, a subtle suggestion of the progress about to happen culturally as much as to Braddock.

Kids grow up too fast. They rebel, they do stupid things. Although in their 20s, Braddock and Mrs. Robinson’s daughter Elaine don’t have a clue. Those old values kept them naive growing up. Now, they don’t know how to handle anything. In the final shot, the two elope, sitting at the back of a bus laughing. Then they stop as the realization sets in – they have no idea what comes next. Neither knows what to do. Their terrified stares encapsulate a decade of racial division, war, and gender inequality.

Before getting on the bus, Elaine ditches her soon-to-be husband at the altar. Braddock runs down some stairs, fending off Elaine’s family who scream in protest. A cross hangs on the wall, and Braddock grabs it in defense, swinging wildly, then using it to lock everyone in. In a movie laced with memorable scenes, shots, and dialog, that’s an underappreciated touch. Religion began to fade from Braddock’s generation. There he is, locking those fossilized, hypocritical values (and Mrs. Robinson) inside with their own symbolism. And now, he’ll have to sort the real world on his own. 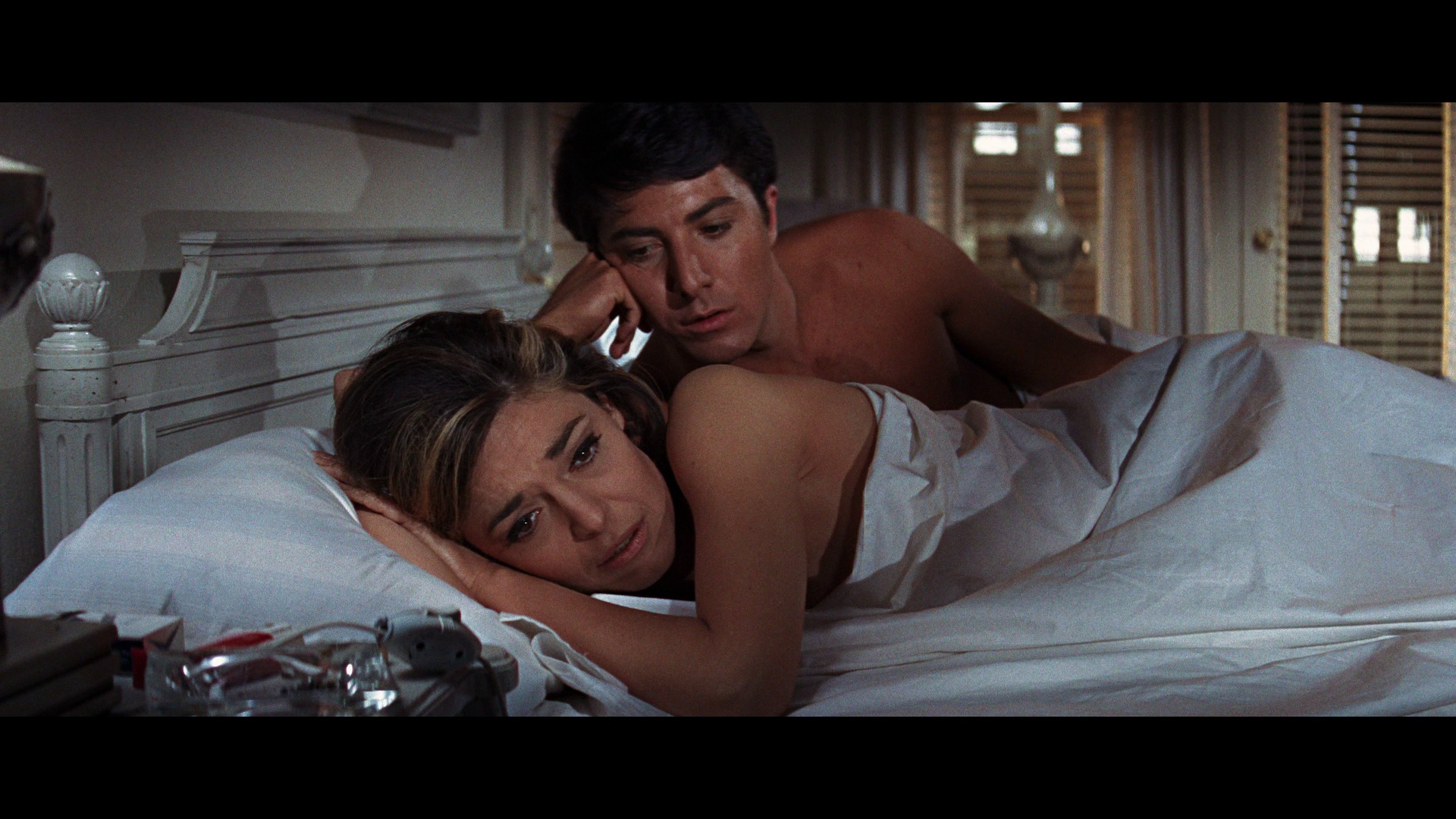 In a possible first, Shout Factory licenses Criterion’s The Graduate Blu-ray for inclusion in the Anne Bancroft Collection. Other than disc art, this is identical to Criterion, menus and all. That’s great, since this brilliant release captures the vibrancy and texture evident in The Graduate. Black levels and contrast deliver such depth, it’s plausibly presented in HDR (it’s not though, obviously). Depth leaps forward, with key shadows emboldened. California sun carries the needed vividness.

Even with that praise, color makes The Graduate. Seeing Braddock’s pool and that blindingly pure blue (backed by grass and trees in dense greens) makes this appear new. Flesh tones flawlessly keep their hue, slightly saturated but not unnatural. Primaries leap forward, bright at all times.

Both original mono and 5.1 mixes appear on this disc. For its ability to enliven the iconic soundtrack, go with the 5.1 unless seeking the purist touch. Low-end draws power from the music, along with being widened slightly through the stereos and rears.

Small stereo touches bring a little space as cars pan the screen, nothing major. Better is the pure fidelity. Dialog loses nothing to age, and these songs sound richer than anywhere else.

Director Mike Nichols and Steven Soderbergh join for a commentary track, an interesting pair that comes through like master and student. UCLA Film Professor Howard Suber is on the second commentary.

A 2015 chat between producer Lawrence Turman and writer Buck Henry reunites these two to discuss their roles for 25-minutes. Dustin Hoffman speaks solo in a 38-minute interview. Widow of editor Sam O’Steen speaks of her husband for 26-minutes. From 2007, a documentary explores The Graduate’s impact on those influenced by the film; this runs 26-minutes. Produced for the 25th anniversary, a 1992 retrospective interviews key players. Criterion digs up a Barbara Walters interview from 1966 with Nichols, and that runs 15-minutes. A short Dick Cavett segment with Paul Simon runs five minutes, and a trio of screen tests (13:18 total) provides a great “what if?” into the casting process.

A flawless encapsulation of America’s 60s and the profound change, The Graduate depicts a generation faced with uncertainty.

The 15 unaltered images below represent the Blu-ray. For an additional 23 The Graduate screenshots, early access to all screens (plus the 100,000+ already in our library), 100 exclusive 4K UHD reviews, and more, support us on Patreon.