The Fly tells a story of life. Then a cruel, heartless death. In its first shot, The Fly sits over a party where Seth Brundle (Jeff Goldblum) tries to convince Veronica (Geena Davis) he’s the one to change the world. It’s like sperm clashing to become the strongest amid intellectual peers.

Soon Brundle is an awkward teenager. “Are we romancing?” he asks, not sure if his time with Veronica is a genuine relationship. After using his invention to transport himself, Brundle gains strength; he’s in his 20s now. With age comes disease. Soon, he needs crutches. His teeth and hair fall out. Finally, he literally breaks apart in death.

An inspired touch by director/co-writer David Cronenberg takes the 1950s The Fly, turning it into a god complex parable. Brundle dies and is effectively reborn in his Telepod – a notably more marketable name than “disintegrator-integrator” from the original. After his atoms reform, Brundle feels invincible, defeating death through genetic science and seeing himself as Christ-like.

David Cronenberg takes the 1950s The Fly, turning it into a god complex parable

There’s an inherent mania to Brundle. He goes from denying credit (“I just put the thing together”) to believing his genius conquered a computer. Brundle concludes computers cannot comprehend flesh, just the synthetic. But in The Fly, it’s soon clear that our own understanding is no better; we’re primal and instinctual, prone to naive passion or delusions.

For tone, The Fly utilizes disquiet to reconfigure this story into something lurid and adult. Love might be real. Journalist Veronica hunts for a story to one-up her ex (also her editor), and Brundle swells with desperation to escape his quirky isolation. Whether that’s truly love or self-fulfilling craving hangs above these characters.

However, by bringing Veronica and Brundle together, The Fly explores what disease does to people. Released in 1986, the script draws a line to the AIDS epidemic. Brundle isn’t sure if his swelling skin is contagious, a similarity to AIDS’ earliest stage. During the The Fly’s finale, bodily fluids do attack others, emboldening an already grotesque makeup and gore display.

Slowly, Brundle becomes less human. Those he once drew close he pushes away. Or, they choose to leave him. Disease changes who we are and how people see us. The sicker Brundle becomes (insect DNA fuses with his own), the more Veronica fears contact. He states it’s like cancer. The cure involves fusing with another, of which no one is willing to do. Romance is dead, and so is Brundle. 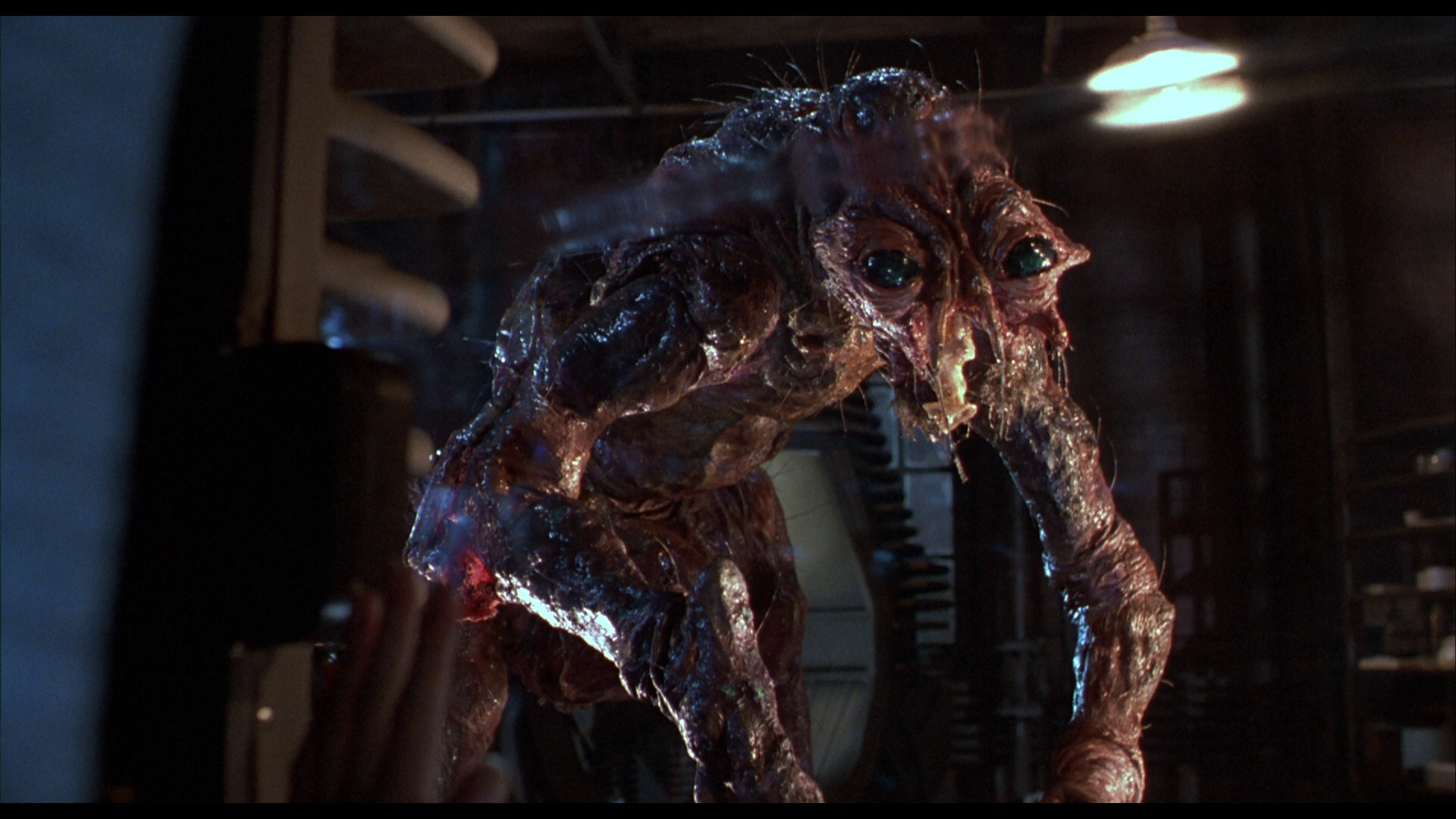 It’s disappointing not to see a new master struck. While the print itself holds up (no dirt or damage), there’s a visible gap between this and modern mastering techniques.

Choose between DTS-HD stereo and 5.1. Both deliver results near one another, given the 5.1 mix doesn’t make use of surround channels. Even stereo movement remains lean (a passing train creating ambiance is a highlight), giving the score oomph rather than effects.

The score is where The Fly draws its range, with spectacular boldness found in composer Howard Shore’s work. Both lows and highs reach their needed peaks, in balance with dialog.

Shout pulls bonuses from Fox’s disc, and also adds their own. For 13-minutes, Mel Brooks speaks about his role as producer, and another producer Stuart Cornfeld chats for 23-minutes. Casting director Deirdre Bowen is given 14-minutes, cinematographer Mark Irwin 25-minutes, and Howard Shore nine. Author William Beard provides a new commentary from his perspective as a Cronenberg specialist. That’s all new stuff. The rest is pulled from the previous release.

A commentary from David Cronenberg is first, though you’ll be better served by the incredibly long documentary Fear of the Flesh. Clocking in at 46 minutes longer than the movie itself, there’s nothing left to the imagination, for better or worse. There’s even more content if you choose the enhanced mode, which offers additional features when prompted.

Brundle Museum of Natural History takes a trip to collector Bob Burns’ house to view props from the film. Deleted and extended scenes contain an alternate ending, and some fun film tests are worth a watch. A stack of articles, scripts, and other text documents are included if you want to stare at your TV to read them. In addition, a pop-up trivia track can add to your knowledge base.

Distinctive, lurid, and intelligently gory, The Fly remake rates equally with The Thing as one of the great horror do-overs.

The 15 unaltered images below represent the Blu-ray. For an additional 20 The Fly screenshots, early access to all screens (plus the 100,000+ already in our library), 100 exclusive 4K UHD reviews, and more, support us on Patreon.