Chuck Berry is undoubtedly a giant in the history of rock music. His brand of guitar-driven rock music in the ’50s inspired such bands as the Beatles and Rolling Stones. With a swagger and style all his own, Berry blazed a path for every rocker that has followed. When Rolling Stone lists him as the fifth-greatest artist in Rock history and classic hits like Johnny B. Goode are known across the world, there is no doubting Chuck Berry’s pioneering impact on popular music.

If Elvis is the King of Rock, Chuck Berry can rightfully be called the father of Rock. He embodied everything that is great about young Rock ‘n Roll, a spirit that lives on today along with his memory and amazing legacy.

Filmmaker Taylor Hackford’s Chuck Berry: Hail! Hail! Rock ‘N’ Roll is a documentary that captures the concert celebration held in St. Louis for Berry’s 60th birthday in 1986. Keith Richards of the Rolling Stones, a rock legend in his own right, handpicked a stellar backing band for Berry led by the Rolling Stone himself. The lineup of musical guest stars include such superstars as Eric Clapton and Etta James.

Richard’s talented band backs an energized Berry as he runs through his catalog of hits in grand style. Watch as Chuck Berry pulls out his trademark duckwalk, looking quite spry for a 60-year-old rocker. The St. Louis crowd goes wild as Berry’s biggest hits like Maybellene receive electrifying performances.

The concert’s guest performers include Julian Lennon (John Lennon’s son), Robert Cray, Linda Ronstadt and Etta James, among others. Ronstadt duets with Berry on a marvelous rendition of Back In The USA. Julian Lennon helps out on a rousing Johnny B. Goode. Singer Etta James delivers a thrilling Rock and Roll Music. The performances are outstanding as Chuck Berry and guests reach splendid heights.

Hackford builds up to the entertaining concert material with revealing footage of Berry discussing his life and career, cut with fascinating rehearsal footage and interviews from other music legends discussing Berry’s influence. Bruce Springsteen gushes about working with Berry early in his career. Bo Diddley and Little Richard reminisce with Berry about the twin issues of payola and music royalties in the ’50s. Everyone has something to share about Chuck Berry’s enormous influence on their music, or more personal interactions with the rock legend.

The bonus features delve into more extensive detail but Berry’s go-it-alone personality and unpredictable behavior are obliquely referenced throughout the movie. There’s a glimpse of Keith Richards arguing with Berry in rehearsals, as the two guitar legends clash preparing for the concert. Berry liked flying by the seat of his pants in concert, which wasn’t always fun for his backing musicians.

Carefully balancing musical and personal insights from other music legends and Berry himself on his career, Chuck Berry: Hail! Hail! Rock ‘N’ Roll succeeds as a remarkable concert celebration of a rock icon performing his greatest hits with superstars backing him. The musical guests are great but the concert is pure Berry and his signature guitar sound. Chuck Berry did have to overdub his concert vocals in the studio since he showed up with a hoarse voice before the concert. 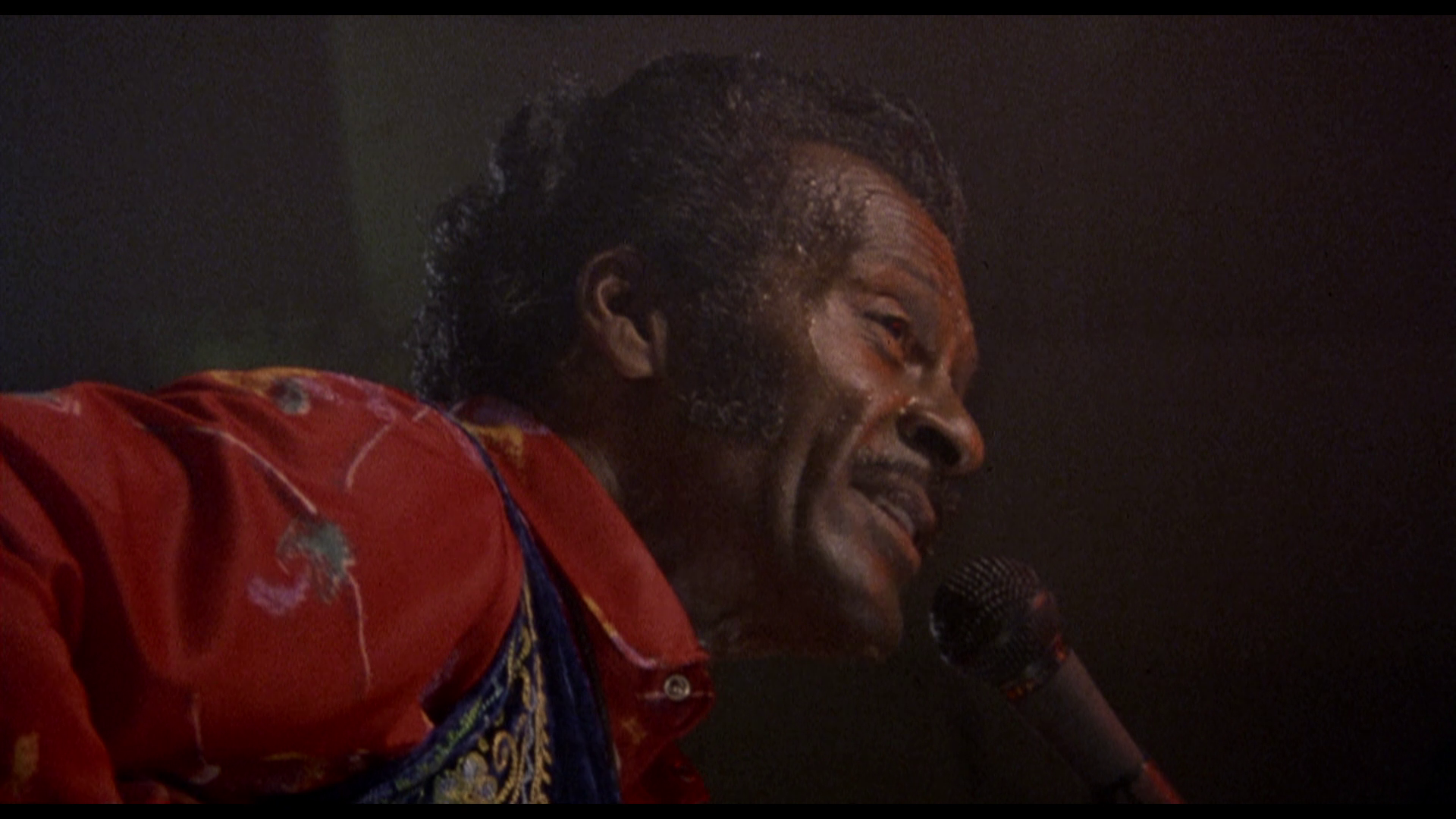 Shout Factory has licensed the documentary movie from Universal. The 1987 film looks fairly good in a film transfer with appreciable grain and fine texture. Serviceable black levels and a steady contrast highlight the consistently pleasing cinematography. The concert footage has decent definition and clarity. Presented at the movie’s intended 1.85:1 aspect ratio in 1080P resolution, it’s a solid film transfer with a mixture of softer footage.

The main feature runs two hours, given an entire BD-50 to itself. All the special features are displaced to a second BD, giving the AVC encode a sizable bitrate bump for maximum transparency. Compression artifacts aren’t a problem and the elements have no major issues. A hint of processing possibly here and there but nothing really out of the ordinary. The transfer has the detail and grain structure of a slightly older telecine. However, it’s a well-done film transfer that provides superior depth and texture over DVD.

While the upgrade to HD video is nice, the included lossless audio is the real reason to purchase Shout’s new Blu-ray edition. What sounded great on DVD is heard in fantastic quality on Blu-ray, a real sonic upgrade for music lovers. There is an atmosphere and clarity to the superb 5.1 DTS-HD MA soundtrack that can only be heard in lossless fidelity. Bass reproduction is perfect. Berry’s music is nicely captured in the effective surround mix.

Beautifully mastered with open dynamics and without limiting, the concert recording comes alive. Tight drums and clean vocals deliver a pure audio experience. Berry’s guitar licks are presented upfront in vivid life. The band is nicely spaced throughout the soundstage. You will believe you are in St. Louis near the front of the stage, surrounded by thousands of screaming fans.

Instrument separation and vocals are well defined, rarely leaking between channels. The sound quality is so good that some studio sweetening has likely been added; live concerts rarely deliver this kind of perfect punch and impact.

Optional English subtitles play in a white font. A secondary 2.0 DTS-HD MA soundtrack in stereo is just as fun as the surround mix.

Chuck Berry: Hail! Hail! Rock ‘N’ Roll arrives as #94 in Shout Factory’s Shout Select line. As good as the main feature and concert are, the special features are just as compelling. Director Taylor Hackford unloads a full array of rare rehearsal footage and lengthy unseen interviews with various rock legends. All the special features have been moved to disc two in this two-disc set. In a curious move, the SD special features get their own BD.

The bonus features on this set are a real delight for fans of Rock history and absolutely essential viewing. There are extended interviews with many Rock Hall-of-Famers no longer with us, including Roy Orbison and the Everly Brothers. Robbie Robertson of The Band appears in one special feature and he wasn’t even in the movie. It appears that every special feature in the same quality from the 4-DVD Collector’s edition has been brought over.

Hail! Hail! Rock ‘n’ Roll Concert Rehearsals (53:49 in SD; 2.0 Dolby Digital) – Drummer Steve Jordan and director Taylor Hackford help introduce us to this unseen rehearsal footage of Chuck Berry and his band before the concert. Everyone from Eric Clapton to Etta James appears in the rehearsals. Shot in three different angles and originally presented using the DVD format’s multi-angle capability, Shout Factory has all three angles playing together in three different boxes on the screen. Often mesmerizing for music lovers, every rock fan should watch the footage.

The Reluctant Movie Star making-of documentary (66:27 in SD) – Director Taylor Hackford and his producers painfully detail the combative dynamic they were put through cooperating with the mercurial Chuck Berry. His unpredictable behavior made filming this movie a nightmare for the crew. An honest portrait of working with a legend despite his huge stature as a star.

Witnesses To History #1 (58:17 in SD) – The complete and uncut Little Richard, Bo Diddley, And Chuck Berry group interview. Fantastic material that could have been its own feature. The three music legends share tales and compare stories from their days in the music game.

An absolute treasure trove of priceless interviews with music legends. As Hackford explains himself, he figured this was his one chance to interview rock legends like Roy Orbison and gets them to go far beyond the topic of Chuck Berry. This is pure gold for music junkies. These are intimate interviews and legends like Jerry Lee Lewis let it fly.

“Chuckisms” (17:38 in SD) – A collection of classic Chuck Berry remarks made in his distinctive manner.

“The Burnt Scrapbook” (30:43 in SD) – Chuck Berry reminisces over his musical memories with The Band’s Robbie Robertson looking at old scrapbooks in this engaging footage of the pair hanging out together.

An insightful documentary on Chuck Berry and a brilliant concert with the rock legend getting backed by Keith Richards and other music superstars.

The 15 unaltered images below represent the Blu-ray. For an additional 32 Chuck Berry: Hail! Hail! Rock n Roll screenshots, early access to all screens (plus the 100,000+ already in our library), 100 exclusive 4K UHD reviews, and more, support us on Patreon.