Take a moment today. Process the reality that Santa with Muscles exists. A human being wrote this movie. Another human being spent money to produce it. Others acted in it. Just digest this:

Hulk Hogan stars. He’s a millionaire pushing health products, and every morning he fights with his staff. Like, physically fights them. Running from the cops during a paintball match, Hogan disguises himself as Santa, bumps his head, amnesia convinces Hogan he’s Santa, and he ends up at an orphanage that so happens to sit above a cave full of explosive diamonds. That’s not it. No, no. There’s another rich guy employing scientists (and a woman with electric hands or something) who drive around in an ice cream truck, looking to take over the orphanage so their germophobic boss can take the diamonds, after enslaving the kids to do his bidding, one of which is Mila Kunis.

Again, actual humans came up with this.

Santa with Muscles isn’t even memorably awful, just a chore

Weird Santa fiction was out there before Santa with Muscles. The surreal Santa Claus Conquers the Martians, for one example. Bizarre as that 1960’s feature was, it made sense. Combine UFO culture with the space race; exploit it for Christmas. Santa with Muscles though, there’s no logical reason this exists.

It wasn’t for another year or two until pro wrestling (along with Hogan’s career second wind) blew up in pop culture. Watching millionaires get their comeuppance wasn’t an in thing to do. The cast, from Clint Howard to Star Trek’s Robin Curtis, isn’t enticing. In a limited theatrical run, Santa with Muscles came out at the beginning of November; it didn’t even have that timing down.

Santa with Muscles defies critical form. It’s not charming. Hogan acts a notch below his in-ring persona. The meandering plots topped with sub-plots bore into the brain. Maybe this isn’t the worst from Hogan’s ‘90s resume (endure The Secret Agent Club or Assault on Death Mountain for perspective), yet Santa with Muscles isn’t even memorably awful, just a chore. 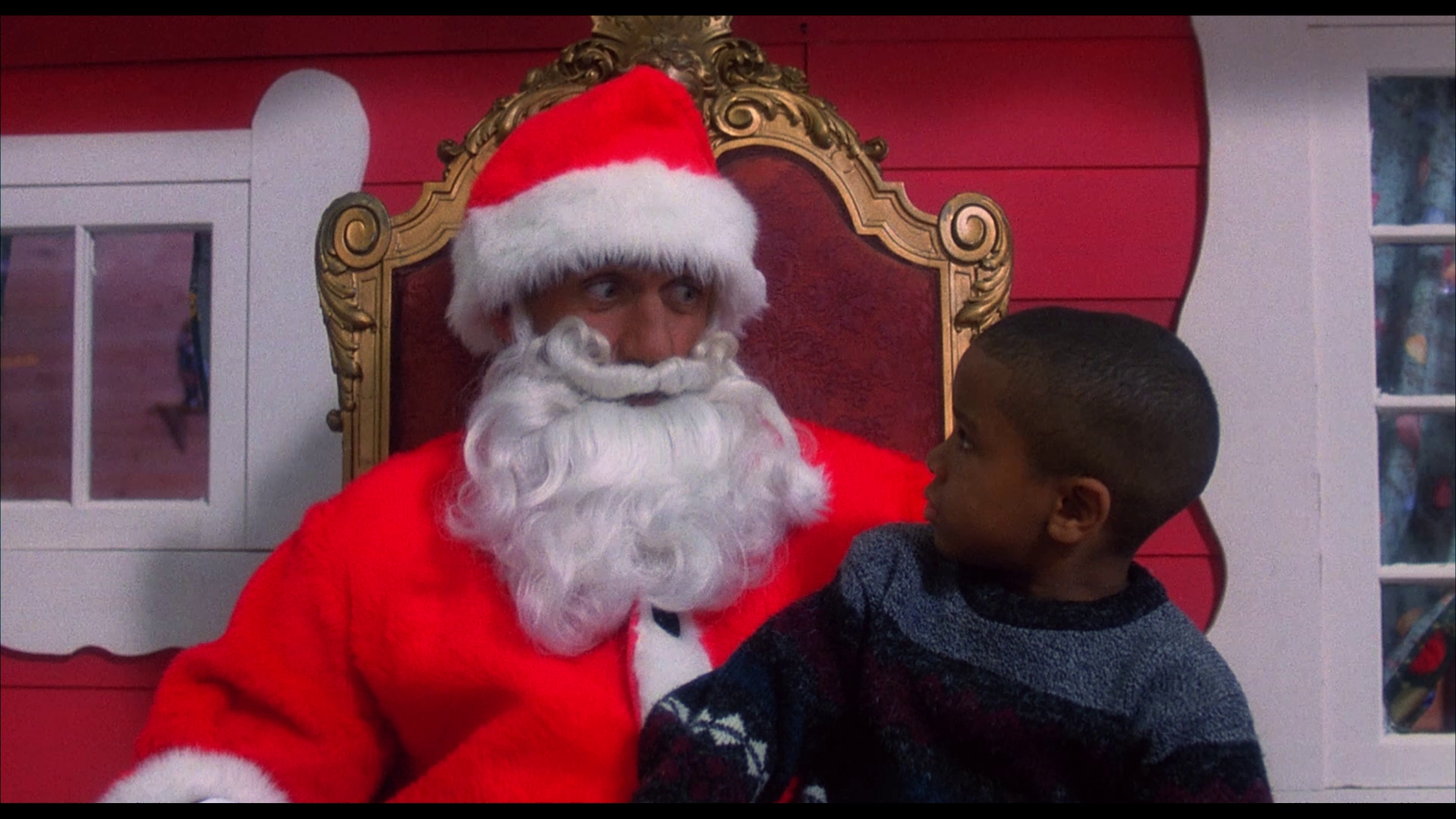 Thick grain appears over compressed, choking out detail. Resolution takes a leg drop, down for the three count. Any fidelity takes a hard clothesline.

Enough of that. Color reaches a mundane, saturated level, aside from Hogan’s Santa suit. That is a blindingly bright, glowing red, completely out of line with the rest. Brightness reaches a decent peak, and once underground, black levels pick up if unspectacular.

Dry DTS-HD stereo won’t stretch the soundstage. Santa with Muscles sounds more akin to mono, and that’s likely what this is.

Mediocre clarity muffles the audio, mashing the elements together into a tight range. Even the subtitles make note that certain lines cannot be heard. Overall volume is low too.

To think Santa with Muscles can debut on Blu-ray without a single bonus feature. What a world.

An amnesiac millionaire becomes Santa to save orphans from another millionaire seeking to enslave the kids to mine explosive diamonds. Really. That’s Santa with Muscles.

The 15 unaltered images below represent the Blu-ray. For an additional 12 Santa with Muscles screenshots, early access to all screens (plus the 100,000+ already in our library), 100 exclusive 4K UHD reviews, and more, support us on Patreon.