Between Genius and Sanity

Dr. Hans Reinhardt spent 20 years living with robots when an astronaut crew finds his spaceship hovering near a black hole. In that time, Reinhardt (Maximilian Schell) lost his humanity. He too became a robot.

Sort of a halfway bridge between the philosophical 2001 and Star Wars’ pop cinema The Black Hole treads intellectualism, mingling with laser guns and comical sidekick robots. It’s an odd film, never quite comfortable, and retreading Disney’s own 20,000 Leagues Under the Sea, but in space.

Under the Disney banner, The Black Hole plays to a family audience. It’s never descends to total madness; Reinhardt’s villainy isn’t in question, although much of his insanity happened before The Black Hole began. The heroes in this technological future must debate what’s human. This while engaging with brightly color sets and Saturday morning antics.

The Black Hole sucks itself toward infinity, never stable in doing so

That leads to a surreal finish, dizzying and bizarre while bringing this sci-fi tale into a heaven/hell dichotomy that traps the inhuman villain within his own machinery for eternity. For something so pulpy and mainstream, The Black Hole ends with an interpretative, weird parable. In there too is a story about loyalty and treason. The crew debates whether defying orders to better mankind’s knowledge is right. By the end, they have an answer, ascending toward angelic visions. Black Hole draws a Cold War theme too, where Reinhardt will do anything to win, the American heroes choosing right instead.

Were The Black Hole not so Saturday morning, not so duplicated from formula, and not so awkwardly toned, then it’s a success. It visual effects remain a marvel. The cast is genuine. And the grandiose design excels in delivering an angled future, where hard lines match Reinhardt’s sharply immoral personality.

This is never a stupid movie. Exploitative and cashing in, certainly, but one with too many ideas. It’s as if a board room back-and-forth made it to the screen, executives clamoring for their idea over another. The Black Hole sucks itself toward infinity, never stable in doing so. Now, it’s an oddity, arguably more remembered for the Disney branding than its content. 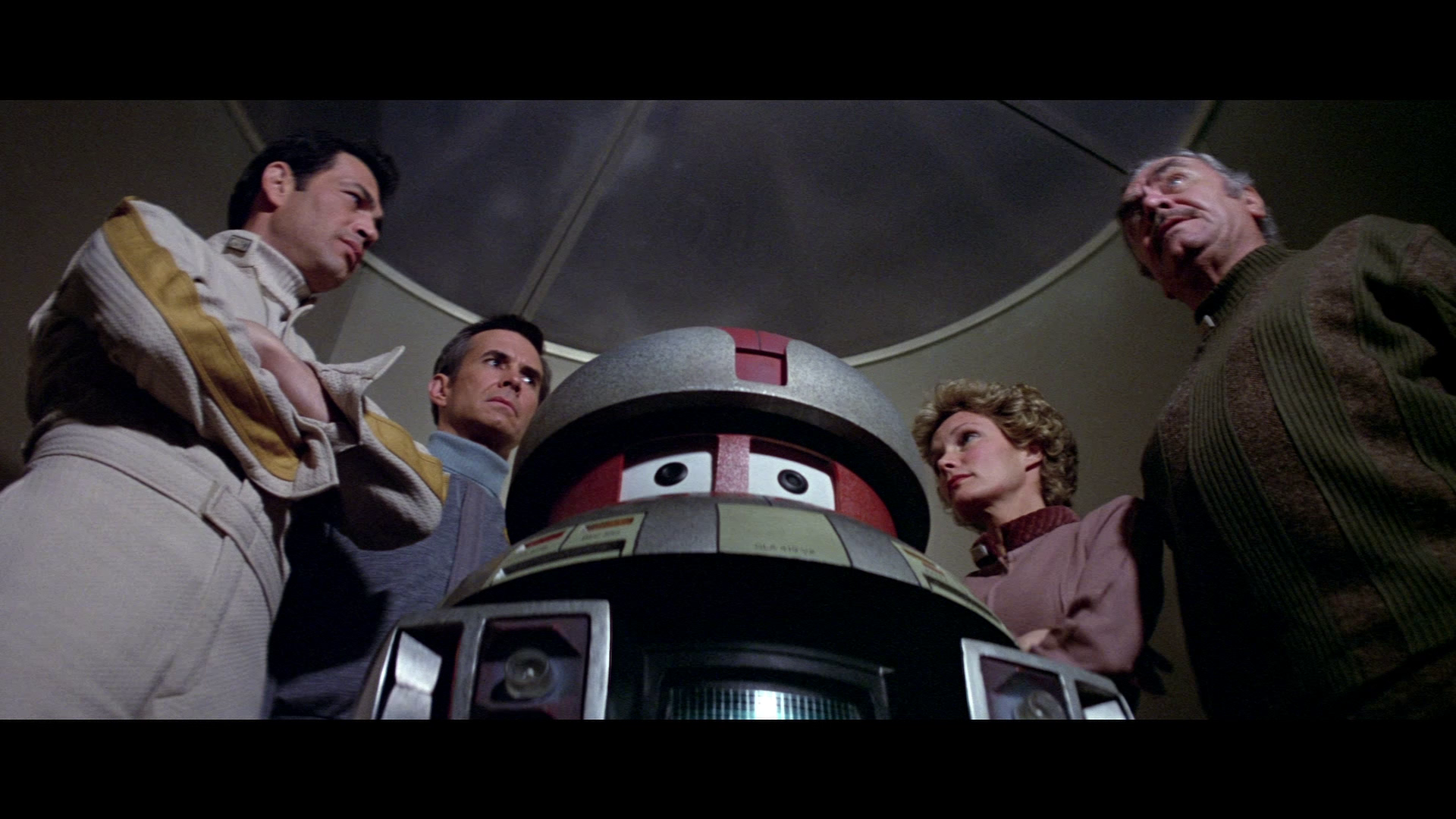 A heavy film stock challenges this Blu-ray. Disney’s encode handles things well enough. An array of blue screen work heightens grain structure, and while noisy, the output is organically so. Hardly any damage appears either, impressive when considering the matte work at large.

Reasonable resolution draws what detail it can. Again, the litany of visual effects bring complications. Away from blue screens, definition captures a little facial texture. Paint strokes appear on the robots. Miniatures excel on their own, with gorgeous matte paintings in full view.

Dialog is far too low in this mix. The center channel suffers when amid action scenes. The Black Hole is mixed low in general, but dialog especially so.

Equally bold is the score, marvelously pure without any aging.

Although this is the Blu-ray debut and it’s labeled as an Anniversary Edition, neither of those instances warranted any bonus features. Note the disc is exclusive to the Disney Movie Club.

Never quite deciding between pulpy fiction or thematic drama, The Black Hole is an oddity from Disney with still notable visual effects.

The 15 unaltered images below represent the Blu-ray. For an additional 21 Black Hole screenshots, early access to all screens (plus the 100,000+ already in our library), 100 exclusive 4K UHD reviews, and more, support us on Patreon.