But what about Taco?

Terminator: Dark Fate’s worst moments happen during the action. Either the ceaseless digital effects tire, the explosions become routine, or the countless beatings sustained by a new model Terminator (Gabriel Luna) turn repetitive. This movie never wants to end. Rather, it keeps spending endless dollars assuming cars smashing stuff is what made Terminator special. It’s not.

The franchise was never about the sci-fi or violence. Terminator seized on time travel because the conflict between machines and man became a siren call for what we are – fighters, moralists, and empathetic beings. 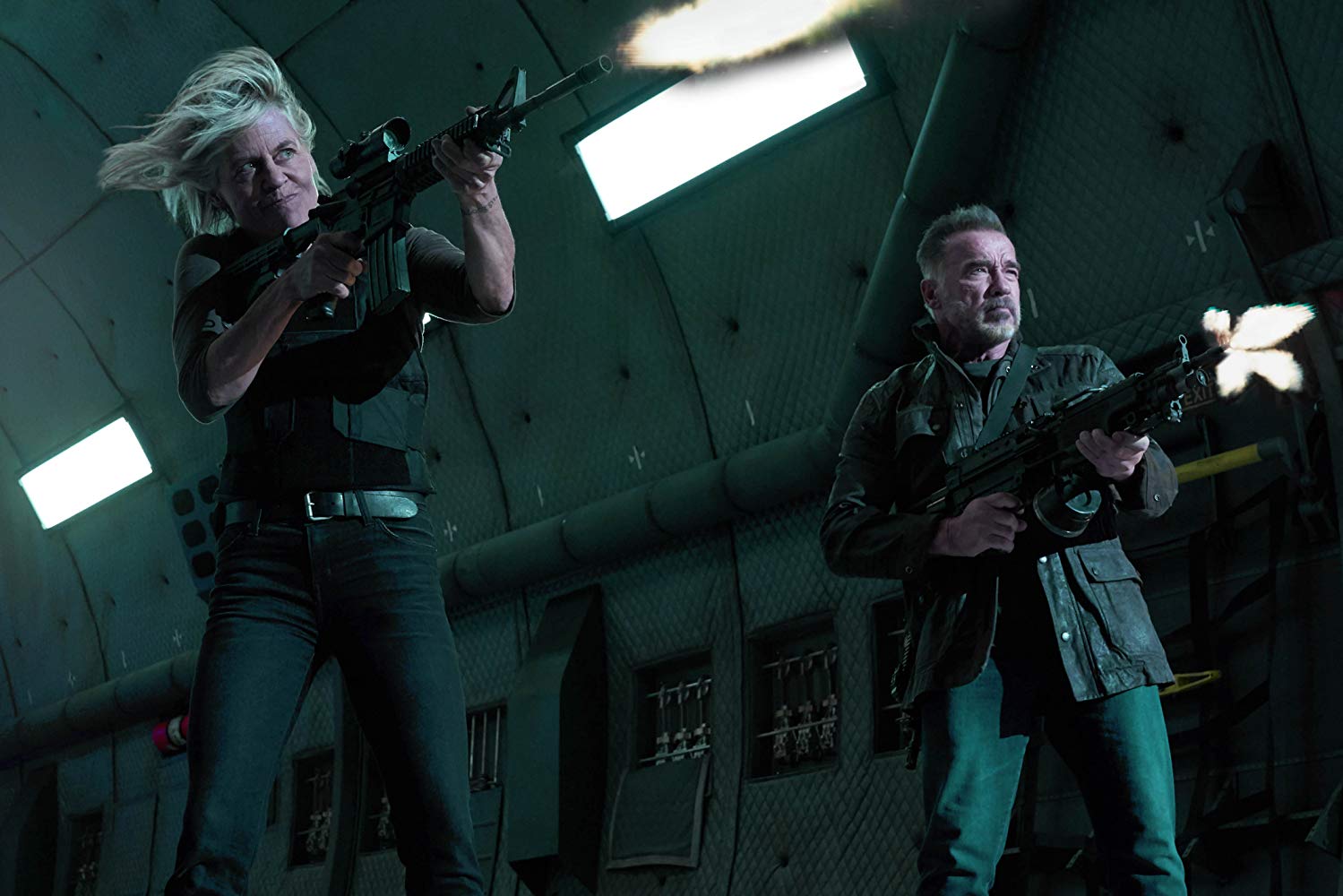 To that extent, Terminator: Dark Fate understands. It ropes in an overdose of contemporary politics to make it so, set in Mexico with an innocent migrant heading toward the border, seeking escape from a killer. Trouble is, border patrol agents don’t believe a robot from the future is on the loose. That leads to scenes of desperate Mexicans boarding trains by the hundreds. Kids get locked in cages. There’s even a border wall. Terminator: Dark Fate speaks so directly it’s likely to be cast as a news pundit.

In this is a mix of old and new. Linda Hamilton comes back. So does Arnold. A newcomer in Dani (Natalia Reyes) takes the feminist baton, retreading familiar ground. If anything limits Terminator: Dark Fate, the “future robot seeks to kill future resistance leader in the present day” routine doesn’t bring any imagination. Catch phrases return too, because nostalgia. 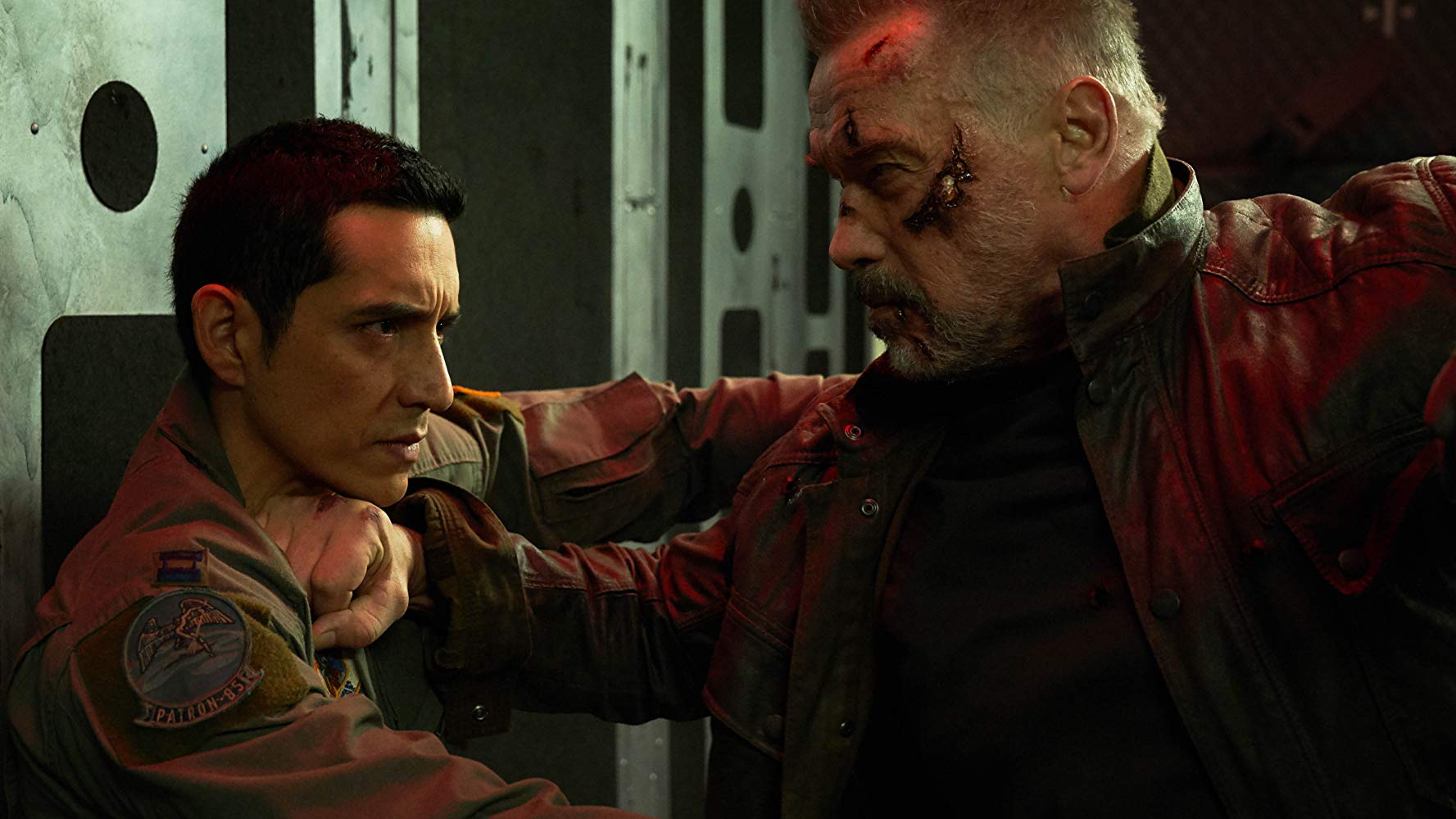 … in the intervening years since Terminator 2, James Cameron’s lost the subtle touch

Back in the ‘90s with Terminator 2, fear loomed via the internet. That’s what SkyNet was, a ruthless futuristic vision of what happens when we connect; we lose ourselves to data and algorithms. Terminator: Dark Fate aims at automation. Dani works in a car factory where robots replace workers. In the appeal to conservative audiences, the script shows that while car manufacturers moved to Mexico, the jobs don’t – those factories crank out robotics too.

There’s firm compassion to this story. As it was for Linda Hamilton protecting her son against the looming tech revolution, Terminator: Dark Fate aims to save Dani from discrimination. James Cameron receives partial story credit (with four other writers), and in the intervening years since Terminator 2, he’s lost the subtle touch. Avatar showed this too, and here, the Terminator morphs into a Border Patrol agent to chase Dani down in a series of images that ludicrously make the point. Terminator 2 cast Robert Patrick as a vicious LAPD officer with a softer subtext.

And about Dark Fate’s Terminator – it’s another T-1000-like monstrosity, morphing and turning its hands into blades. The goal here is to reset, ignore Terminator 3, Salvation, and Genisys, and that must also mean ignoring their similar villains.

Glimmers of greatness bubble up in this story. Schwarzenegger spouts some stellar comedy. Linda Hamilton is still action cinema royalty. In the finale (or one of the six or so finales, anyway), Hamilton stands alongside Reyes and a cyborg (Mackenzie Davis), staring down their male opponent in a moment worthy of feminist joy. Davis swings a chain. Hamilton cocks a shotgun. Reyes made her choice to fight no matter her armament.

If there’s a moment where Terminator: Dark Fate excels, that’s it, well above the impossible nonsense generated by multiple plane crashes, preposterous freeway chases, and underwater brawls. Terminator lost the human scale from T2, and ironically, computing power delivers most of it. Thankfully, a trio of women can still fend this off.