In 1956, mercury discharged from a chemical factory was the cause of disease throughout Minamata, Japan. It wasn’t until 2010 the guilty company settled – and that settlement will go to future victims as the poisoning continues to impact people via congenital defects. That was prophetic, and thus the title Prophecy.

The setting in Prophecy is Maine, although the scenery is Canadian-sourced. Instead of a chemical company, it’s a paper mill. Rather than Japanese, victims are Native American. The intent then is that Minamata’s generations-long disaster can happen anywhere.

Prophecy joined the ecological terror boom in the late ‘70s. Along with disaster cinema, nature-run-amok took its own turn with genre scraps like Frogs. Prophecy is a little different though, not so singularly focused on environmental issues. It’s a hodgepodge of liberally minded social concerns, including wealth inequality, slum lords, gentrification, abortion, and Native American rights. A catch all, and also a jumble.

Talia Shire co-stars, and where Prophecy wears its left-leaning messaging in bold neon elsewhere, that’s not true to Shire. Her character revolves around pregnancy, self-blame, self-doubt, and relenting to male figures. Her on-screen husband (Robert Foxworth) stays in charge, an empathetic doctor with hippie running in his blood. He’s willing to fight; Shire cries, or helplessly pleads for change.

In the mix, a monster. Fans of South Park will likely draw a comparison to the show’s ManBearPig; it’s a wonder if Matt Stone and Trey Parker spoofed Prophecy with their beast. Mercury not only mutated this thing, but grew it to some 15 feet tall. In Prophecy, the car-flipping, house-ruining mutant bear (half fur, half flesh) flops around with limited effectiveness.

Tossing people effortlessly, Prophecy surfs the serio-comic line. One kill sees a camper, snug in their sleeping bag, helplessly tossed into some rocks. Feathers fly. The throw, the impact, the inconsistent monster suit all pair for a morbidly funny slaughter.

To give due, Prophecy’s heart beats to give the EPA power, regulations purpose, and wants capitalists to fail. Those themes successfully drive the otherwise lethargic story. There is a point, if one that sways too far into the cliché and absurd. Prophecy ends not necessarily with a solution for social ills, but a shotgun to the face. That’s not all that empowering. 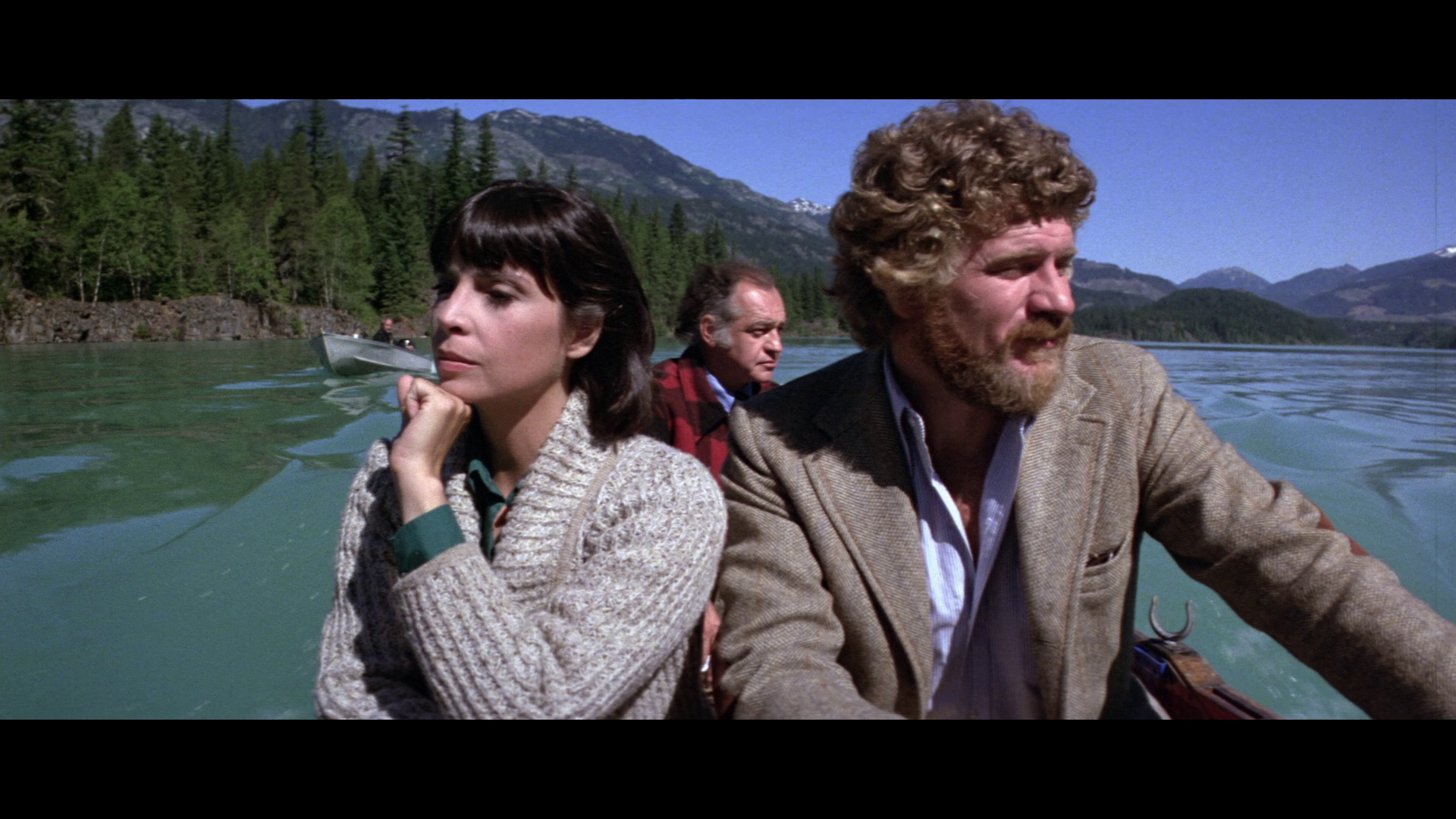 Kudos to the compressionists behind this disc as the encode easily handles the source print. Grain maintains purity. That lets a pleasing tier of definition through. Grand wide shots capturing the location handle lengthy forests. In close, facial texture jumps out with consistency. If not the newest master (maybe a 2K source?), there’s enough firmness in Prophecy’s presentation to earn a spot on Blu-ray.

Also plentiful, color saturation gives additional life to everything. Boldness is appreciated, without overstepping the sense of organic color. In daylight, Prophecy produces grand contrast. Even at nightfall, depth holds firm, whether black levels hit home or not.

With a surprisingly wide stereo track, Prophecy creates far more space than most films from this period. Little things like leaves being brushed aside or lightly splashing water have notable placement. Early on, a radio travels between the channels based on camera position. Of course, monster attacks sweep around too.

Leonard Rosenman’s heavy score punches through decades of age, impressively pure in terms of fidelity. Dialog lessens in comparison, notably raw. Like the film stock’s general faults, this too isn’t unexpected for this period. DTS-HD doesn’t impede anything.

Shout tracks down key players for interviews, beginning with Talia Shire who speaks for 19-minutes. Robert Foxworth (10:02), writer David Seltzer (13:14), effects man Tom Burman (19:34), makeup artist Alan Apone (21:14), and suit actor Tom McLoughlin (21:51) all follow. Seltzer and McLoughlin rank as the best in this lot for those short on time. Trailers, radio spots, and a worthy stills gallery come in for the finale.

While not terribly effective as a horror movie, Prophecy finds entertainment value in other ways, intended or otherwise.

The 15 unaltered images below represent the Blu-ray. For an additional 19 Prophecy screenshots, early access to all screens (plus the 100,000+ already in our library), 100 exclusive 4K UHD reviews, and more, support us on Patreon.