From the production team behind Batman: The Animated Series comes a futuristic Batman set some forty years in the future. Airing for three seasons on Kids’ WB from 1999 to 2001, Batman Beyond took the daring step of removing Bruce Wayne as Batman and replacing him with a new character.

While Batman: The Animated Series was a huge hit with older teens and adult fans, the WB Network wanted a younger-skewing program able to draw in children aged 6 to 11 as well. Thus was born Batman Beyond, set in a distant future with many new characters no one had ever seen before like Spellbinder and Woof.

Batman Beyond has a teenager in high school fighting crime as the Bat, outfitted with a sleeker costume that flies and can turn invisible. The costume lacks a cape, signifying this isn’t your father’s Batman.

Terry McGinnis (voiced by Will Friedle) is a former juvenile delinquent that assumes the mantle of Batman under the careful watch of Bruce Wayne, now an elderly man in his eighties. His father’s murder pushes him to steal Bruce Wayne’s Batsuit, changing young Terry’s life forever. Terry is a normal high school kid by day, with Dana as his girlfriend and the tomboyish Max always helping him out of trouble.

Touching upon Batman’s history and sharing continuity with Batman: The Animated Series, familiar faces pop up. Barbara Gordon has become police commissioner of Gotham, long after she has abandoned being Batgirl. Bruce’s only companion at Wayne Manor is Ace the Bathound. A falling out with Dick Grayson has made Bruce an isolated figure. Long gone are his days fighting crime as Batman.

Flying cars and newer tech now dominate the Gotham scene. Gone is the gritty urban environment, replaced by high-end electronics and a pulsing techno soundtrack. The show even creates its own lingo, including terms like “schway” that recently crept into the CW’s Flash series.

Like many older fans that had seen Bruce Timm and crew create some of the most successful animated DC programs of all time in Batman: The Animated Series and Superman: The Animated Series, Batman Beyond was viewed with caution upon arrival. It was radically different from DC’s earlier animation efforts, embracing a new set of characters and aimed at a much younger crowd than before.

Batman Beyond doesn’t quite reach those heights, having to create a whole new Gotham on the fly without the benefit of familiar comic book stories guiding the major plot developments and episodes. Less a mystery series than Batman: The Animated Series, the high school setting changes its storytelling and tone. The episodes still deliver familiar superhero action and suspense, usually wrapping up within twenty minutes unless a two-part story occurs.

Batman Beyond has gripping and thoughtful episodes exploring a wide range of issues within its superhero paradigm, but rarely hits the transcendent heights of Timm’s best shows. It’s a solid animated superhero adventure series highlighted by Kevin Conroy voicing an elderly Bruce Wayne. 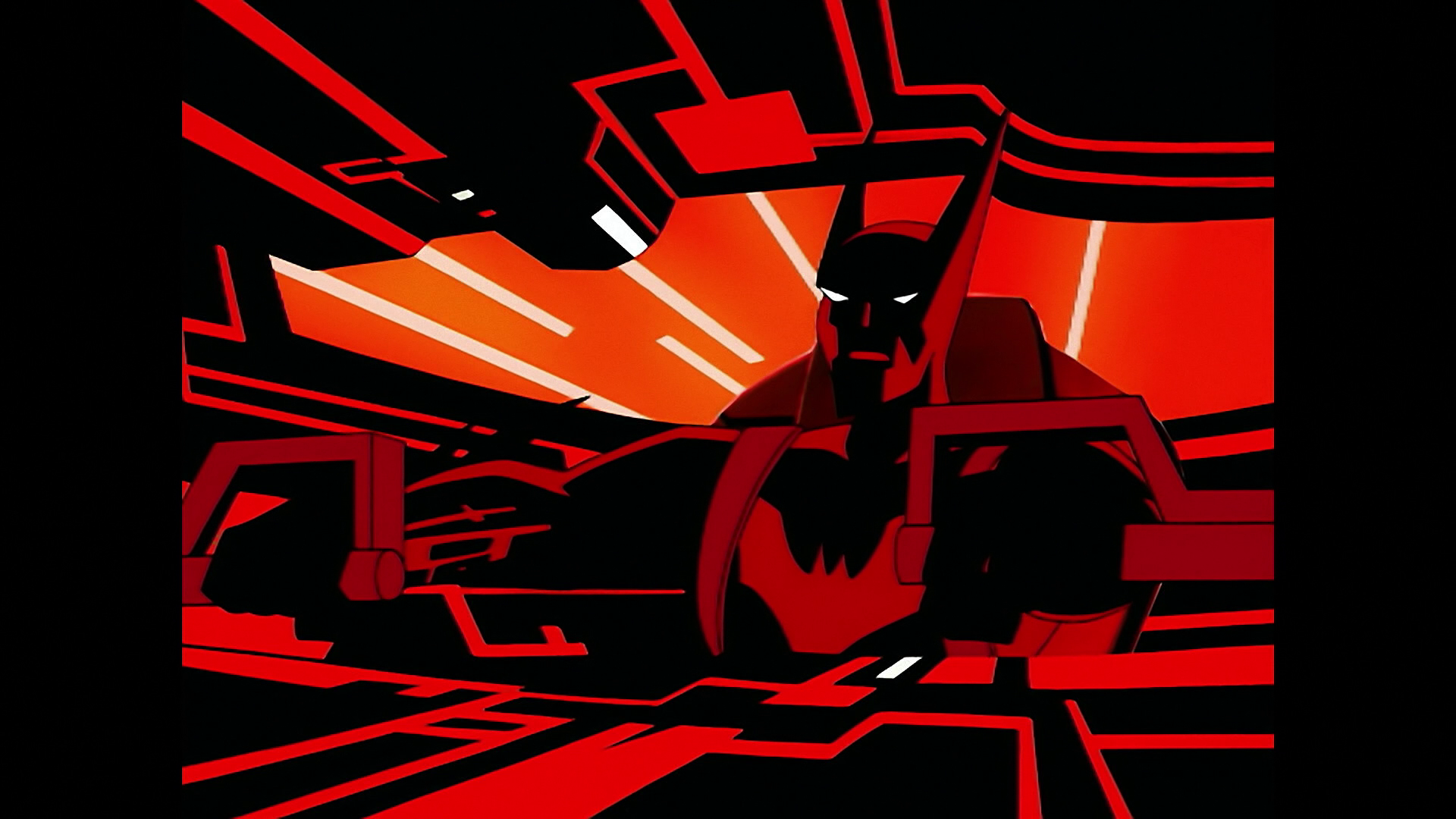 All 52 episodes of the series are spread across four BD-50s, encoded in serviceable AVC. Most episodes have been taken from their original surviving elements and presented in their native 1.33 aspect ratio. Banding doesn’t pose a problem.

The animation in Batman Beyond hasn’t aged particularly well and its flaws magnify when blown up to 1080p. Visible aliasing and speckling are fairly common sights. Some dust-busting has been attempted to clean up the animation with mixed results. Aggressive processing has been used when necessary to bolster the animation’s clarity.

Episodes in true HD resolution look fine with better definition and improved color reproduction. A handful of episodes have been upscaled from lower resolution sources due to missing elements, resulting in soft picture quality and weaker colors. Black levels remain strong with an even contrast.

The following information provided by the studio on the new transfers helps explain Warner’s results:

Of the 52 original Batman Beyond episodes, 41 have been fully-remastered from either their original 35mm film source or the uncommon format “OCND,” the original camera negative digital (a digital scan of original negative). Lines and resolution have been enhanced, and dust and dirt have been removed – however, cell dirt remains to not disturb the original picture. Included in the remastering was the removal of grain, resulting in enhanced colors. The remastering process does cause a slight aspect ratio change (approximately 3% loss of screen image).

Due to time-worn irreparable damage, the remaining 11 episodes were “Smart Rezzed” from standard definition Digibeta video. The process provides for significant enhanced resolution and improvement of the original source material in converting from standard to high definition, though it does sacrifice horizontal lines for clearer image and color representation. While still a marked improvement over the original video, viewers will notice a slight difference between the Remastered and the Up-Rezzed final footage. The 11 affected episodes are: “Eyewitness,” “Final Cut,” “The Last Resort,” “Armory,” “Sneak Peek,” “The Eggbaby,” “Zeta,” “Plague,” “April Moon,” “Sentries of the Lost Cosmos” and “Speak No Evil.”

Optional English SDH and French subtitles play in a white font. A secondary French dub is heard in 2.0 Dolby Digital.

The Funko Pop collectible comes in its own smaller box and could be separated from the set for resale if the figures aren’t your thing. A small episode guide is inserted inside the fold-out disc holder, which unfortunately could fall out if carelessly handled.

The entire television series and its spin-off movie Batman: Return of the Joker arrive on six BDs, loaded with both archival DVD special features and all-new content exclusively for this set. A digital copy good on VUDU is included, redeeming all three seasons and the movie in HDX quality. That is a fantastic bonus valuable on its own. The deluxe limited edition sets are numbered to 50,000 units.

Loaded with fantastic insights from the producers and writers behind Batman Beyond such as Bruce Timm and Paul Dini, these are highly informative and entertaining special features. Behind the scenes trivia, anecdotes and mistakes are freely discussed, covering the show’s development and evolution from season to season.

There are 15 featurettes on the bonus discs, highlighted by two new inside looks at the beloved television series, led by one with a gathering of Batman Beyond production talent and cast such as executive producer Bruce Timm and actors Kevin Conroy and Will Friedle, the voices of Batman and Terry McGinnis. The bonus discs also spotlight four episodes with audio commentary from Timm and select members of the production team. Anyone into comic books has to watch the Secret Origin documentary included here, which covers more than just Batman.

Bruce Timm and company follow up Batman: The Animated Series with a well-done futuristic Batman mentored by an elderly Bruce Wayne in Batman Beyond.

The 15 unaltered images below represent the Blu-ray. For an additional 49 Batman Beyond screenshots, early access to all screens (plus the 100,000+ already in our library), 100 exclusive 4K UHD reviews, and more, support us on Patreon.