At the end of All Monsters Attack, 10 year-old Ichiro (Tomonori Yazaki) fights a bully to earn respect. Then, Ichiro torments a sign maker. It’s an oft misinterpreted ending – the message isn’t that All Monsters Attack fails Ichiro by making him a bully. Rather, All Monsters Attack brings a melancholy end to Japan’s expanding society as the ‘70s loomed. Ichiro’s story is inevitable of any child in these circumstances.

The Godzilla series began by utilizing bleak, black & white imagery. All Monsters Attack (Godzilla’s Revenge in the States) is arguably the bleakest of those in color. Japan looks awful in this film. It’s rusting. Everything is brown, the skyline is yellow, and few windows remain unbroken. Aside from children’s clothes, bright color is lost. Across the street from Ichiro’s minuscule apartment sits an abandoned factory. It’s as if the post-WWII recovery hadn’t yet reached this industrial zone.

Few adult characters appear. Those who do further the somberness. In a small role, Kenji Sahara plays a train conductor, hoping to one day save enough money to move to a less polluted area; his co-worker notes the increase in asthma among kids. All Monsters Attack noted pollution affects those in poverty more than the rich, and through debilitating health concerns, keeps them in that social tier. A mere decade before All Monsters Attack, Japanese officials took action against a corporation for mercury leakage, which coined Minamata Disease. In this this script, All Monsters Attack draws another such link.

Ichiro isn’t easy to like. He’s screechy and bratty. But, he’s a kid, and a lonely one too. TV bores him. Both parents work. His only guidance is a neighbor who invents toys. It’s difficult to envision now, but in late ‘60s Japan, Ichiro was an every kid, both in isolating terms and his obsession with monsters. When Ichiro dreams, he sees Monster Island, and Godzilla’s brawls that were playing on movie screens.

Admittedly, that’s thin justification for All Monsters Attack’s egregious stock footage. Much as the smokestack scenery represents industrialized Japan, dismal visual effect scenes indicate tapering box office draw. From that, All Monsters Attack is challenging to defend – Godzilla’s son Minilla is the focus, Godzilla is but a fleeting presence, and a majority of Godzilla’s scenes come from previous films. Any new footage (with dopey new monster Gabara) looks filmed in a spare corner Toho made available.

In context, that all works. All Monsters Attack is like a watching a funeral to Japan’s prosperity, and doing so through a vulnerable kid who is an unknowing victim to that bubble bursting. 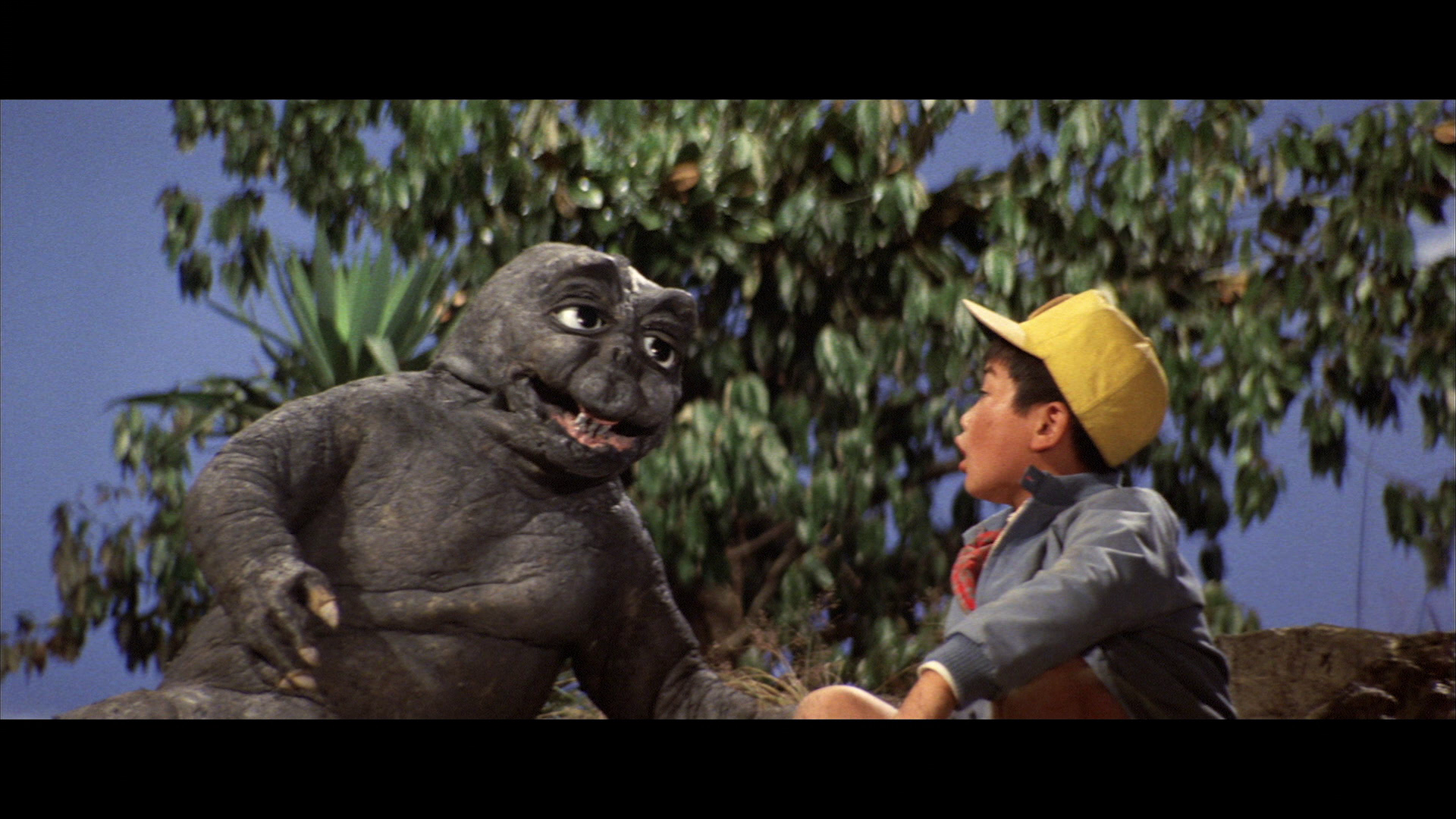 It’s likely to irk some that All Monsters Attack ranks as the Showa Era Collection’s best transfers. While still a release print (evident from the splice marks visible with each edit), this is gorgeous material. Grain holds steady and pure, producing a clean image with pristine detail. Reasonable sharpness captures minutiae like peeling paint on the Minilla suit. Never on US home video were those cut corners so visible.

Hardly debatable, the DTS-HD track is in service to the Godzilla series worst scores. The opening song is unbearable, and the twangy themes later fare no better. With only minimal wobbling at the highest ends, the uncompressed mono track keeps clarity intact. While understandably aged, even dialog stays pure and consistent. It’s pleasing vintage audio.

Note only the Japanese language is offered, hopefully meaning the awful English dub (that makes Minilla sounds like Don Knotts) is a permanent historical oddity.

Too often degraded and ridiculed, All Monsters Attack is one of the most solemn entries in the Godzilla series, even with its identifiable faults.

The 15 unaltered images below represent the Blu-ray. For an additional 14 All Monsters Attack screenshots, early access to all screens (plus the 100,000+ already in our library), 100 exclusive 4K UHD reviews, and more, support us on Patreon.