Intolerance produces a lasting concussive force. That’s why Maleficent does what she does, or so goes this tweaked fairy tale retelling. Yes, Maleficent (Angelina Jolie) curses a small girl to a cruel fate. She does so out of spite for the man who wronged her, now a king after taking her wings. He did so because the previous king’s dying wish was to see Maleficent killed.

Opening narration speaks of generational war. One side hates the other because of inequality. That builds to where Maleficent picks up, turning a villain empathetic. Evil isn’t born – it’s made. At least, that’s the intent in this story. Those wronged and vengeful can still still make right.

Jolie plays this with the right devilishness, more obnoxious than outright hateful. She smiles when softly tormenting the fairy godmothers, with a devious smirk. Maleficent stands up for her land and the creatures within, her only true violent act; only in self-defense does she kill.

Maleficent resets a rather tired story

It’s enough to elevate Maleficent’s routine structure and fairy tale cliches. There’s substance, offering a means to see someone who once personified evil from their point of view. The solution then is innocence. Aurora (Elle Fanning) reminds Maleficent of her own youth. Through Aurora and childlike naivety, a bridge is created between warring sides – that realization that one event, even one person, can change a personal outlook on life.

Disney fashions this morality fable with ludicrous, overstretched visuals. Much as Maleficent exudes colorful beauty, it’s equally gaudy. The aesthetic is stuck between conveying unnatural allure and realism, never finding the means to merge the two. Maleficent overwhelms itself. As with Disney’s other recent live action do overs, staging looks obvious. Digital effects remove barriers. All of them. That’s costly.

Key, however, is that Maleficent resets a rather tired story. No longer is Sleeping Beauty about looks and finding a princely man. Those elements remain, but downplayed to turn away from an impossibly fast love story to one about self-correction and acceptance. King Stefan (Sharlto Copley) never forgives, but is consumed by hate; that’s villainy, where animosity succeeds. Anyone in this story who chooses to listen and understand walks away a hero. That’s a clever, contemporary way to tell this fable, without being chained by eons-old gendered roles. 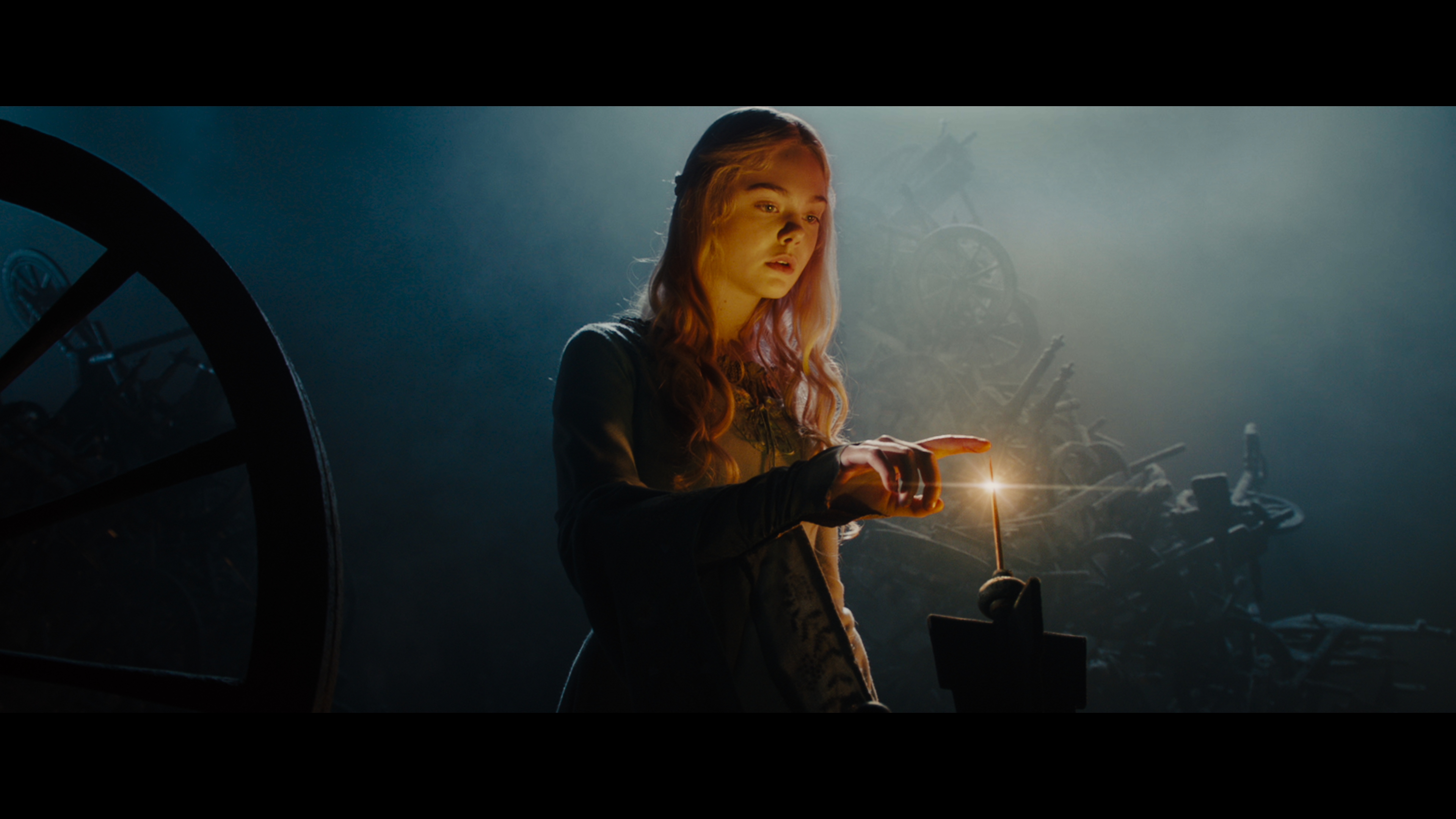 Maleficent debuts on 4K and ultimately is saved by HDR. In the early going, the world glistens. Streaks of light shine everywhere. Sun reflects from water. Everything sparkles. Intensity adds superb range to the visuals, an immediate stunner. When things begin to darken, shadows take hold with equal weight, even crushing in spots. Seeing Stefan smothered by pure darkness adds to his character.

With intent, blueish grays fill much of Maleficent’s runtime. That’s not harmful, as the cinematography keeps an attractive visual style. However, those book-ended fantasy-scapes create mammoth, saturated color spots. The greenery pushes intensity, dream-like in quantity.

That’s where the good stuff ends. Maybe it’s the master, maybe it’s compression, maybe it’s the digital effects. Regardless of cause, noise persists for the full runtime. Typically that’s fine, but here detail diminishes as a result. That’s worsened by additional post-processing, causing thin halos in places. Sapping more definition is Jolie; her face receives an inconsistently applied bath of noise reduction. Whatever sharpness this 4K upscale is capable of, not much escapes.

Dolby Atmos adds little to this soundstage. Fairies use height channels as they pass, and occasionally an action scene will catch something (say a thrown spear). Otherwise, this mix mirrors the 7.1 track from the Blu-ray.

The news is that a Disney-made Atmos track isn’t smothered by reduced range. Well, not entirely anyway. Volume still needs a boost, but once corrected, LFE responds in kind. Maleficent pushes into the low-end, exhibiting strong dynamics, an absolute pleasure during the finale. Earlier war scenes do the same for living trees as they strike. It’s the first Disney Atmos track in ages not to whimper when called on.

Nothing on the UHD. The rest remains on the Blu-ray, same as before.

Short bonuses cannot capture the full breadth of this production, and rather glimpse at different areas with a similar style for a pitiful half hour total. Aurora: Becoming a Beauty focuses on Elle Fanning’s casting, role, and performance. From Fairy Tale to Feature Film details the transition from animation to live action and why the approach was different. Building an Epic Battle lingers on a key first act action set piece, detailing stunt work and planning.

Classic Couture is a brief look at Jolie’s horn headdress and Maleficent Revealed is a reel of effects work that shows the tremendous effort in creating this film’s world. Five deleted scenes, some seconds long, are left.

Angelina Jolie is inspired casting to reset Sleeping Beauty’s dated themes, presented through the eyes of a once intolerant Maleficent.

The following six screen shots serve as samples for our Patreon-exclusive set of 43 full resolution 4K screen shots grabbed directly from the UHD: