It figures that in this current and cursed timeline, something like Hobbs & Shaw speaks sensibly. As a brazen, idiotic, muscle-driven action flick, it’s necessary to spell this out. Hobbs (Dwayne Johnson) and Shaw (Jason Statham) look at one another, explicitly saying, “We can beat him together,” as if the theme of differing personalities working as one to defeat villainy didn’t fill the prior two hours.

Hobbs & Shaw is best described as a kid’s cartoon for alpha males. The buddy pair trade barbs about egos and strength and clothing style akin to a grade school playground. Johnson and Statham fit, and together on screen, turn Hobbs & Shaw into a pure comedy that so happens to blow the budget on mega-action. Statham basically plays a character acknowledging action movie clichés, with only thin glass separating him from something like Airplane.

Fast & Furious producers did not rule out the franchise heading to space at some point. That’s not going too far anymore. If anything, it seems logical to strap these dudes to a rocket, sending them to zero G. Hobbs & Shaw isn’t even at its most ridiculous when Johnson keeps hold of a helicopter bare-handed. The overwhelming Marvel-light superhero throws out any rule book long before.

Hobbs & Shaw warns society about giving in to technology, ironic given how much Hobbs & Shaw relies on digital work

Idris Elba plays the super soldier Brixton (one action cinema’s great bad guy surnames now), the “black Superman” as sold by trailers and the script. That’s apt. Not only does Elba have a motorcycle that’s effectively a Transformer, but added power and new age bullet proof vest. He’s a beast. At this point in Fast & Furious, that’s needed in a villain to maintain the escalating action.

In play is a super virus; Shaw’s sister (Vanessa Kirby) has it. Bad guys want said organ-melting bug to further their techno cult. Hobbs & Shaw warns society about giving in to technology, ironic given how much Hobbs & Shaw relies on digital work. That brings everything to a finale where computers meet old school, Elba’s forces dealing with malfunctioning equipment, while Hobbs’ Samoan family take up whatever makeshift arms they can find.

Yes, this does mean Fast & Furious is still about family and bonding. Loosely, but it’s there. If there truly is a Fast & Furious creative bible, that’s probably the first stanza. Afterward, a chapter on acceptable breaches of physics, saying that you can hook two cars together going 60 on a dirt road… by throwing the wench. Perfectly. Then those cars can indeed be lifted by a helicopter, dangled over a mountain, and then saved by Dwayne Johnson. Of course.

So please, get these guys into space. 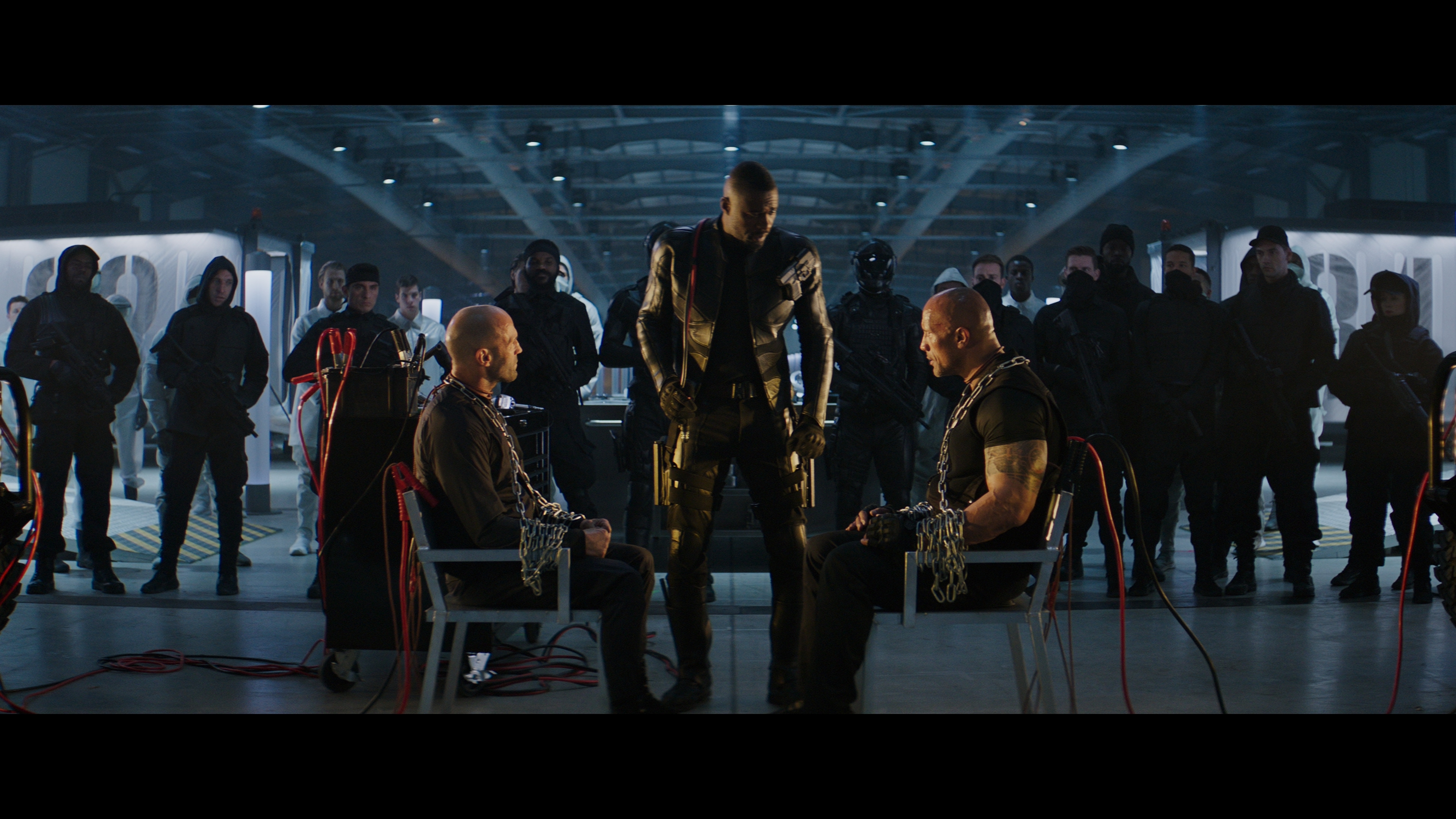 Pulled from a 2K digital intermediate, the end result in 4K does impress. Cinematography sticks to consistent sharpness and heavy lighting to draw out facial definition. Close-ups breathe life into these images, flush with texture. London-based wide shots bring the city to life, and once into Samoan territory, the organic life stretches for miles. While not firm enough to convince trained eyes this is 4K, there’s plenty see.

Deep color fights with each new scene, veering between divergent palettes. As the screen splits under the opening credits, Johnson’s half carries a heavy warmth. Statham goes in opposition with drier blue. Color timing plays like that for the entire movie, settling into a surprisingly pleasing gray early, then slowly pulling in saturation to the sun-soaked greenery in the last chapter. Like the movie itself, color palettes follow an animated feature’s style.

It’s loud. Hobbs & Shaw relies on blistering dynamic range, a beast when peaking in the lows. When an industrial smoke stack collapses, the room shakes, and that’s while falling plus when gravity wins. Helicopter engines properly rumble, as do car engines during a street chase.

While the entire mix earns praise, the last hand-to-hand brawl uses Atmos to its fullest. Thunder and rain overhead, punches specifically placed, voices precisely planted, with tremendous LFE force supporting this all. That doesn’t override anything prior. A wildly active chase involves road mines, missiles, and effortless pans. Not a speaker goes unused. When Elba goes in for “surgery,” a voice drops from the heights, adding sonic fun even when outside the fighting.

Director David Leitch hops in for commentary duties. An alternate opening and deleted scenes follow. What’s left is a slew of EPK material, with stuff on stunts, effects, the cast, individual actors/actresses, and other general making-of stuff. It’s all bland, except for a bit with Johnson’s real life dog. Because dogs.

Note extras reside on the UHD and Blu-ray.

Unintelligent and celebrating the stupid, Hobbs & Shaw runs with that identity to add another level of absurdity in the Fast & Furious franchise.

The following six screen shots serve as samples for our Patreon-exclusive set of 44 full resolution 4K screen shots grabbed directly from the UHD: