Were Godzilla real, conspiracies would follow. That’s human nature. As Ghidorah: The Three Headed Monster opens, UFO watchers sit on a rooftop, hoping for an intergalactic message. When no one speaks to them, they blame the media’s disbelief. Aliens sense non-believer’s brainwaves, claim the extraterrestrial hunters.

It’s not only theorists – Naoko (Yuriko Hoshi) works in a journalistic side show, tracking these weird stories. Naoko works for Japan’s National Enquirer equivalent; imagine Bat Boy, only in her world, Godzilla exists. Media exploiting bizarre suspicions for readership is the natural cycle.

Local police deal with what they perceive as kooks. An assassination attempt on a princess (from the fictional if vaguely middle eastern country Salgina) befuddles the typical detective procedures. Old logic no longer applies: Turns out, UFO watchers were right. A voice from space saved the princess, turning her into a prophetess. That’s setting up a minor conflict between the known and unknown sciences, belief and non-belief, the surreal and the real.

Through the script, Ghidorah: The Three Headed Monster prepares audiences

Through the script, Ghidorah: The Three Headed Monster prepares audiences. By acknowledging telepathy, meteorites that ship Ghidorah to Earth, and space-born voices that save humans, having Godzilla comically take an electrical beam to the butt doesn’t seem out of place.

In that preposterous mixture, the message is of alliance and understanding. The world is full of oddballs, eccentrics, and believers. If Godzilla, Rodan, and Mothra can resist a Venusian invader together, why can’t people accept their own differences?

When Princess Salno (Akiko Wakabayashi) first appears in Japan, overtaken with an alien identity, people mock her. They crudely ask if she’s a man or a woman. They tease her about traveling in space. Those same antagonistic differences translate to Godzilla and Rodan as they tussle, just (literally) enlarged. Had those mocking men listened to Salno and her prophecies (telling of giant monsters soon to appear), evacuations could save lives. Instead, they worry about her gender.

It’s not as if Salno’s ideas suggest anything absurd. By Ghidorah: The Three Headed Monster, Japan is aware Godzilla exists. They know of Mothra. Rodan sleeps in his volcanic tomb. Yet, it’s somehow a stretch to citizens when an outsider claims monsters might wake up and attack. In that context, it’s not as ridiculous when Godzilla belly laughs. Because somethings – aliens, UFOs, kaiju, etc – defy understanding. 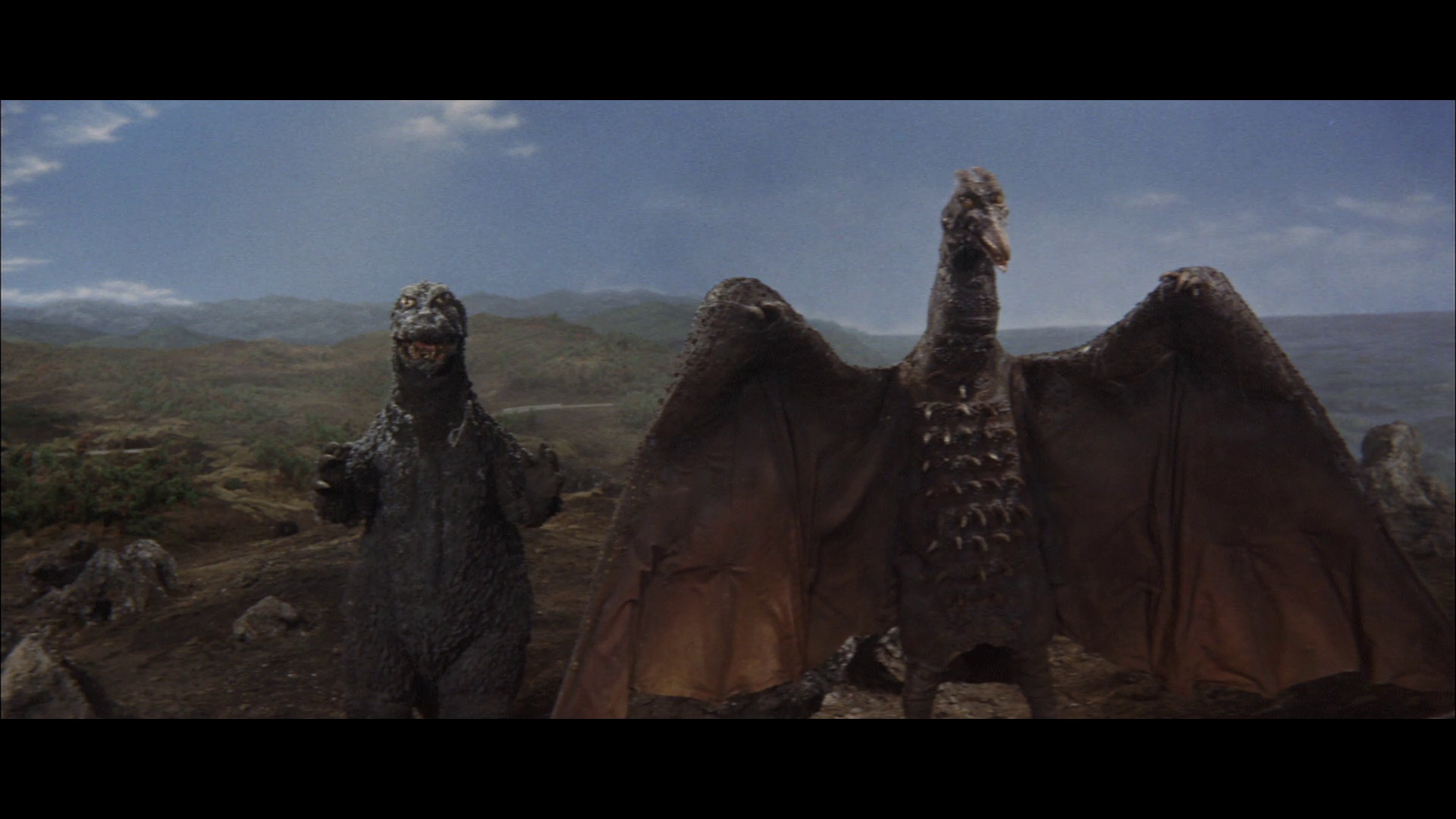 Sourced from a release print, Ghidorah: The Three Headed Monster shares the same transfer with Toho’s Japanese Blu-ray. The difference here is the shared disc with two other films in the Showa Era Collection. That’s a non-issue. Clean grain keeps clarity firm, visibly film-like throughout and sans compression artifacts.

As a release print though, definition only reaches par. Softness dominates. Texture struggles in reaching the eyes. A definite uptick from Classic Media’s DVD release makes a positive impression, if still lacking by current catalog title standards. For Criterion, more so. Note too the irritating editing seams at the frame’s bottom at each cut.

Saturation counts for a lot however. Ghidorah expends energy on color, adding lush vibrancy to the scientist’s jackets when investigating the meteor. Japanese cities look lively. In the mountains, trees light up with fall color. It’s gorgeous.

Ghidorah: The Three Headed Monster’s only problem point is the Mothra song, as sung by the Ito sisters. It’s scratchy and overrun with treble, an anomaly on an otherwise pure vintage mix.

Note only the Japanese track is included, no dub.

The Godzilla series takes a swerve into wild, even comic fantasy with Ghidorah: The Three Headed Monster, but comes away with an entertaining parable.

The 15 unaltered images below represent the Blu-ray. For an additional 25 Ghidorah: The Three Headed Monster screenshots, early access to all screens (plus the 100,000+ already in our library), 100 exclusive 4K UHD reviews, and more, support us on Patreon.