A dysfunctional family with five children barely survive a haunted house, only to be drawn in by the mansion’s evil power decades later as adults.

Taking elements from The Amityville Horror and Stephen King’s It, series creator Mike Flanagan (Hush, Oculus, Doctor Sleep) completely re-imagines author Shirley Jackson’s iconic The Haunting of Hill House novel in this Netflix series. Directing all ten episodes, Flanagan oversees a gripping family saga that happens to have a few ghosts in it.

The carefully crafted drama uses its sparing and effective horror elements as a hook instead of a crutch. It is the farthest thing possible from the cheap and tawdry scares found in b-movies. This is horror made for adults, not teenagers. The fine ensemble cast includes Michiel Huisman (Game of Thrones), Carla Gugino, Timothy Hutton, Elizabeth Reaser, Oliver Jackson-Cohen, Henry Thomas, and Kate Siegel (Hush).

Meshing elements from traditional haunted house stories and a basic premise that owes more to It than Shirley Jackon’s chilling novel, the Crain family barely survive their experience living at the macabre Hill House.

Haunting of Hill House is a chilling story with twists and turns, methodically laid out

The Crains are looking to flip the dilapidated mansion after renovating it. Their five young children, three girls and two boys, are along for the ghostly ride. The mother, hauntingly played by Carla Gugino, doesn’t survive the sinister forces lurking within Hill House. Their stay permanently shatters the family’s happiness. The tragedy forms malignant family dynamics that torment the siblings for years, haunted by tragic memories and frightening encounters.

Having escaped as children, the five grown siblings now face the realities of modern life traumatized by their supernatural brush with death. The experience at Hill House continues to haunt them as adults, flashbacks revealing what actually happened in the house they ran screaming from one night as children. Living separate lives, the siblings are loaded with personal baggage that compounds their problems. One sibling has succumbed to a life of drug addiction, living on the streets.

Flashing between their time at Hill House as children, and the present as adults with problems beyond mere ghosts, the narrative has the dysfunctional family confronting their terrifying memories of what happened. It’s a chilling story with twists and turns, methodically laid out by director Mike Flanagan.

The Haunting of Hill House is loosely categorized as horror but it’s not aimed at the fan looking for cheap thrills. The patient storytelling takes time to develop and jump scares are shockingly light over the ten episodes. Flanagan delves as much into the family’s personal issues troubling each member as their horrific supernatural encounters with spirits. Over the ten episodes, the series brilliantly fleshes out the five siblings and their father, not to mention side characters like the Dudleys.

The Netflix series isn’t for every horror fan. Look towards the original movie for a faithful adaptation of Shirley Jackson’s novel. Pacing is a problem; The Haunting of Hill House plays out as a slow burn that takes several episodes to introduce the creepiest moments.

The sprawling nature of Netflix’s format leads to unnecessary padding and loose edits. Tighter editing could have easily cut five minutes or more from most episodes without losing anything significant. The finale feels like a small let-down after nine great episodes. There’s nothing completely original about the horror elements, though admittedly the frights are mostly eerie and work well within the context of the show. 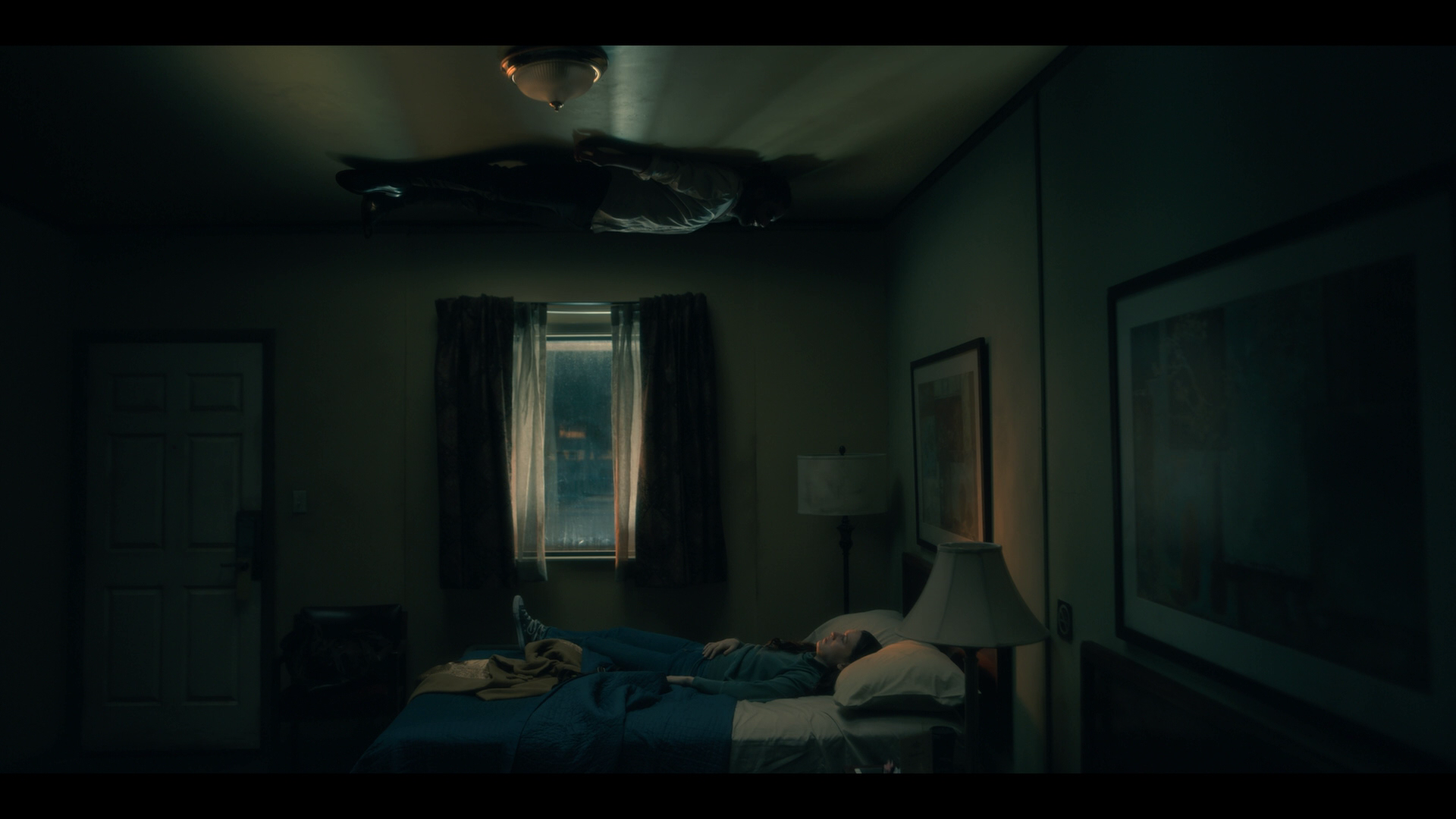 The finely mannered cinematography showcases razor-sharp depth and dimension. Filmed with the Arri ALEXA 65 digital camera, pinnacle of the ALEXA line, The Haunting of Hill House has top-notch production values and obviously shows it here at superb 1080P resolution.

The desaturated palette arrives in darker tones, drained of most warmth and bright color. Expect pale, colder flesh-tones. Ghosts are hidden in the darkest shadows, often obscuring their identity. Shadow delineation is carefully controlled and limited by the filmmakers, despite nigh perfect black levels. Mastered at 4K resolution like all Netflix shows, there isn’t a speck out of place in the presentation.

A fantastic 5.1 Dolby TrueHD soundtrack delivers an amazing aural experience, frightening listeners with creaks and other ghostly scares. Creepy and foreboding, one of the show’s best elements is its superb audio design and immersive surround mix. Cues are perfectly placed and bass engagement is nicely timed for maximum impact.

The active mix absolutely bristles with supernatural energy during flashback scenes set at the Hill House. The high-fidelity audio is mastered with impressive dynamic range and perfect dialogue reproduction. Balanced and open across an expansive soundstage, the mix ranges from tastefully restrained to monstrously frightening when necessary. This is a state-of-the-art horror mix, awfully impressive for a television series that goes ten episodes.

Optional English and English SDH subtitles play in a white font, always inside the 2.00:1 presentation.

The Haunting of Hill House

The 15 unaltered images below represent the Blu-ray. For an additional 37 Haunting of Hill House screenshots, early access to all screens (plus the 100,000+ already in our library), 100 exclusive 4K UHD reviews, and more, support us on Patreon.