A Cockroach in Miami’s Midst

Scarface is both reactionary and alarmist. Oliver Stone’s screenplay slams the Carter administrations chaotic immigration policy, induces immigrant fears, this while blaming communism’s stranglehold as the cause of it all.

Opening frames, via news footage, follows a boat of Cubans headed to Florida. There’s an unidentified man on board with his son; that man points, and an edit cuts to the American flag. Everyone smiles. It’s serene. Then comes Tony Montana (Al Pacino).

Montana is the American dream corrupted. It’s the fortune, the respect, the women, those things denied by communism, but embraced by capitalism. Everything Montana wants, he gets. The warnings though, those go ignored. Shootings and bodies and extortion play into this illegal drug trade. Montana came from nothing, didn’t want to wash dishes, and found the fastest way in to a culture that celebrates wealth above all.

There’s inherent fear, even paranoia, in Stone’s script. Scarface takes place in Miami, with shootouts at midday as Montana seeks to rapidly strengthen his stature. He’s bold, but never portrayed as anything less than a foreigner who succeeds through his brazen behavior. Scarface doesn’t consider Carter’s policy; other than an opening text crawl for context, it’s never brought up again. Instead, Scarface turns toward violence, that which erupts by letting a criminal into the States.

Like Montana himself, Scarface is vicious, violent, and brutal. It’s famous for a liberal use of blood squibs. Famously, the bathroom chainsaw too, although that grotesque killing is implied rather than shown.

And why? Montana feels owed something, the promised American success he distorts to suit him. When that isn’t offered, when control is torn from Montana, and when violence takes those closest to him, the melee ensues. In that way, Scarface isn’t inherently critical toward immigration, so much as the empty political promises that boast about America’s ideal.

Considering Scarface’s 1983 origins, it’s a pessimistic view of drugs, even predictive as to how ingrained cocaine would embed itself through the decade. A key scene involves Montana soaking in a bathtub, watching the news as the anchor pushes against an idea to legalize and tax the trade. The resulting ferocity comes as a result of clumsy, near-sighted policy. Montana brings this out from society’s shadows. Shooting people in the street isn’t an elevation of drug-related violence, rather a turn that makes lawlessness visible to a public willingly ignoring it otherwise.

In those outbursts, Scarface reacts. Montana is meant to be feared. So too are Cuban refugees. Scarface openly criticizes the broken system that lets a Tony Montana infect Miami. If not him, than any desperate American who feels owed their dream, and sees the out in a system openly inviting their want. 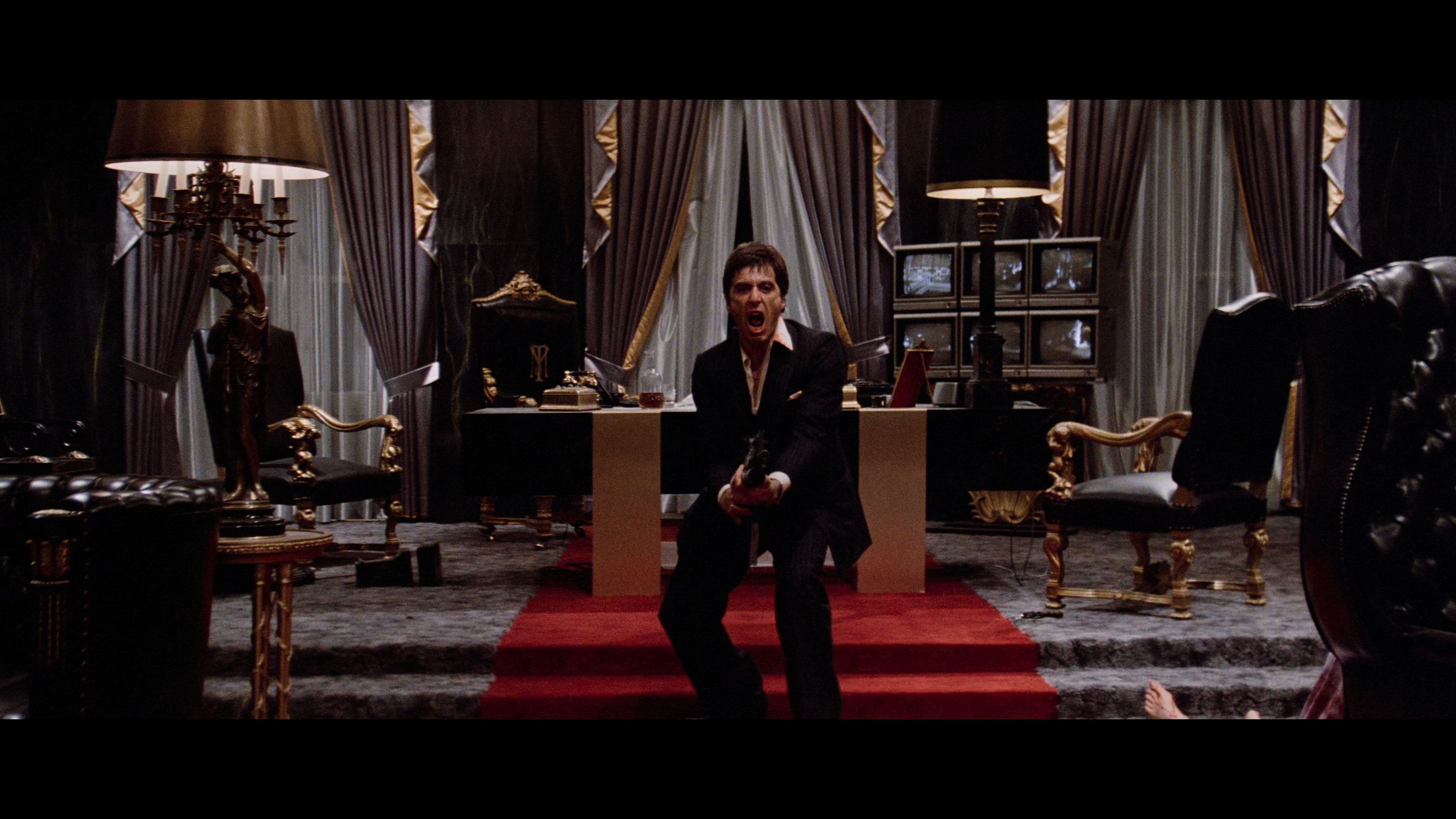 Scarface makes an HDR statement too, showing what this tech can do to decades old material. ‘80s neon glows now. Lit candles pierce dark interiors. Street and car lights bloom intensely, but without feeling tacked on. Rather, the effect is entirely natural. Better still, black levels reveal the nuance in Montana’s all-black office. There’s clear separation between elements, this in a low-light room.

If there’s a qualm, that comes from color. Scarface undergoes some digital grading, adding warmth where there was none. That over-invigorates flesh tones, if giving the Miami skyline and sun a presence. Primaries still stick out too. At the pool when Pacino and Michelle Pfeiffer discuss their relationship, beach towels cover the chairs, gorgeous blues shine in the pool and ocean, and clothing choices make a reference grade scene.

The real joy comes in terms of clarity. Dialog jumps from the center unopposed by age or static. An electronic score challenges peak treble, yet the track holds. Even amid piles of gunfire, integrity stays firm. Scarface barely sounds aged at all.

On the UHD, a 27-minute Tribeca conversation with De Palma, Pfeiffer, and Pacino discusses the production. That’s new. Also, the 1932 Scarface finally makes the jump to Blu-ray after years of being included as a DVD only. Note there’s also a collector’s set with a replica statue – “The World is Ours” piece outside Montana’s office – and it’s made of solid plastic. There’s weight to it.

The rest remains on the Blu-ray, the same bonuses as before. The Scarface Phenomenon is a 40-minute retrospective that looks back while also looking forward as to what the film will mean to people as time passes. Deleted scenes surpass the 20-minute mark, followed by the first featurette, The World of Tony Montana. DEA agents discuss the realities of his crimes and how they compare to reality.

The Rebirth discusses how the film brought to life a lost sub-genre, The Acting continuing although on a more self-explanatory path, and The Creating is the core making-of. Together, those three near the hour mark. A making-of for the video game version is clearly dated, but at least they brought it over. A funny look at the TV edits are here too. For added fun, U-Control offers a body and F-bomb counter, alongside picture-in-picture featurettes culled from the pieces above.

Although paranoid and fearful of immigration, Scarface is also blasting failed drug policy while bringing the resulting violence to the surface.

The following six screen shots serve as samples for our Patreon-exclusive set of 43 full resolution 4K screen shots grabbed directly from the UHD: