The opening of 1998’s Mighty Joe Young remake clearly comes from Disney. You can tell because it’s not one but two dead mothers. That’s gutsy even for Disney.

A year prior, The Lost World tackled similar subject matter. Not murdered moms, rather poaching and profiteering, with large scale creatures. And a decade before, so too did Baby: Secret of the Lost Legend. While Mighty Joe Young brings a mild African touch (although filmed in Hawaii), it’s a wimpy film. Where this modern take on Joe invited contemporary anxieties, it’s instead distilled down into a movie even kids will recognize as cliché.

Things were simpler before. As the ‘40s drew to a close, the original Mighty Joe Young took aim at society. Drawn out of his natural habitat, Joe ends up in the city where he’s abused and exploited. A number of drunks torment him, leading to an active finale where Joe is knighted the hero. Here, the script searches for complexity through a routine romance between stars Charlize Theron and Bill Paxton. There’s a villainous poacher willing to dissect a panda to sell parts (who knew there’s a market for panda spleens?), and the moderate conservationists looking to protect Joe as much as fundraise from his appearance.

For kids, Mighty Joe Young’s blatant overwritten dialog will work out of necessity

For kids, Mighty Joe Young’s blatant overwritten dialog will work out of necessity. Paxton spends more lines effectively narrating for the audience than actually speaking like a human. Theron is played up for her looks and endless heroine routine, never allowing her character growth.

Of course, Mighty Joe Young highlights the ape. It’s a Rick Baker masterwork, no question, and even the digital effects maintain their hold two decades on. Yet, there’s minimal personality to him. He becomes angry, he sort of smiles when playing games, yet until the end (when he shakes his head at a spoiled rich kid), there’s no emotional core. Joe is big, but never awkward. He hardly flinches when loosed in Los Angeles. It makes the climactic moments empty and hollow, all spectacle for no gain.

Using Joe to call out dismal actions for-profit animal hunters brings the story some heart. Like in the ‘40s, Mighty Joe Young seeks to expose crude human behavior. Where it was once natural city life impeding on nature back then however, here it’s clumsy stuff where poachers casually handle ivory in plain view of the camera. They manipulate people to gain trust. Every motion, every line feels predetermined, intentionally invoking a reaction through force. 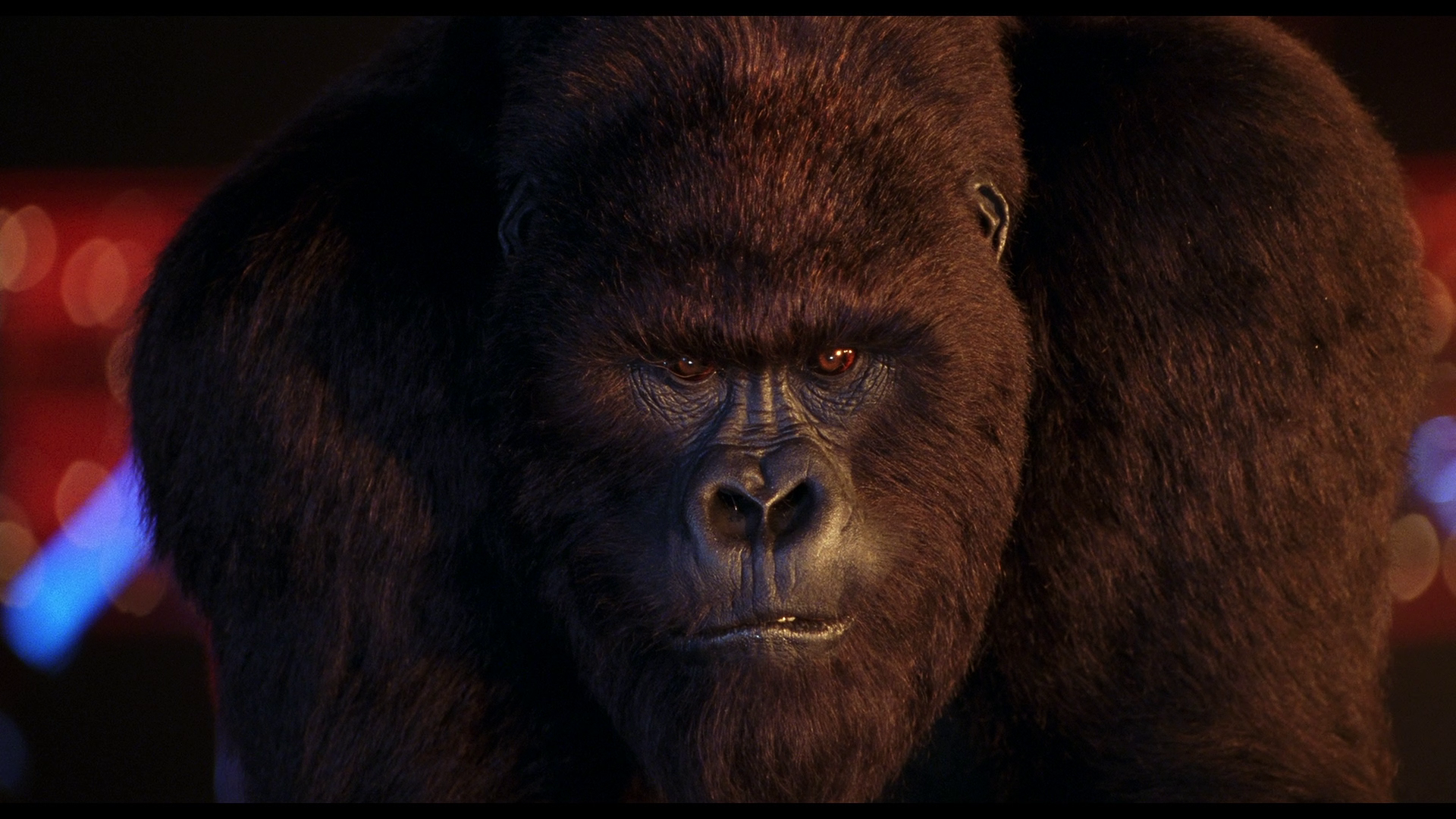 Given little fanfare on its two decade anniversary, Disney locks the Blu-ray release to their Movie Club. Mighty Joe Young withered in its box office run, so that’s likely why. In turn, the studio produces a rudimentary transfer, adequate in definition from a relatively modern scan. Resolution brings out detail in Joe’s suit and animatronic (plus the early digital compositing, not for the better). Close-ups of Theron and Paxton (plus others) naturally sharpen, visibly capturing facial texture.

Color softens a little, bringing out jungle greenery, if without heavy saturation. Flesh tones veer warm, sensibly so as to pair up with African sun. The best stuff comes during the finale, showcasing a Ferris wheel loaded with multi-colored neon, jumping out from the dark, nighttime background.

Source film grain looks a bit flimsy, the most suspect area of the disc. A little processing is a possibility, but aside from a DVD release, there’s nothing else to go on.

Moderate dynamic range adds a few thumps to Joe’s footsteps. Near Mighty Joe Young’s climax, some collisions invigorate the low-end, yet the DTS-HD track doesn’t have bite to match the scale.

Surrounds work a bit better, active in jungles with ambiance plus accurate soundstage movement. Action scenes spread the fronts wide, and where needed, ping the rears. Hardly a masterpiece by 2019’s standards, if enough to create space.

The 15 unaltered images below represent the Blu-ray. For an additional 20 Mighty Joe Young screenshots, early access to all screens (plus the 100,000+ already in our library), 100 exclusive 4K UHD reviews, and more, support us on Patreon.