Duplicity has that rom com moment. You know, where the couple finally opens up and admits they love one another. For most, that’s the endpoint. Maybe a wedding follows during the end credits, but not in Duplicity. No wedding. It’s not actually clear if stars Julia Roberts and Clive Owen do love one another.

Telling the truth goes against Duplicity’s rules. Roberts’ character came from the CIA, Owen’s MI6. Their careers were spent lying, being other people, and burying reality. So it is when they meet: they verbally duel in a routine that suggests a greater purpose to why they come together. In their first meeting, Roberts drugs Owen in a hotel room to steal secrets. It’s an interesting start to the fling.

The pair end up in the private sector, working for rival corporations, headed by CEOs furious with one another. Under the opening credits, Paul Giamatti and Tom Wilkinson fight each other on a runway. Fists, kicks, and bodyslams; the whole deal. These two hold deep resentment, and enough so that Roberts and Owen see an in to swindle the pair for millions.

A decade removed from the initial theatrical release, Duplicity’s war between sniveling CEOs continues to hold relevance. It makes heroes cool, touring Rome and soaking up sun on gorgeous beaches. By smart design, Wilkinson’s office is dreadfully boring. Gray and white dominate. There’s no color. It’s as if there’s no life to his surroundings, only money.

This makes sense, a means to tell a (maybe) romance against the backdrop of those looking to undermine the rich. In the early part of the recession, that made for easy protagonists, and hasn’t diminished in time. There’s room for arrogance then. Roberts and Owen exude a smart elegance in a Soderbergh Oceans-like sophisticated (at times muddled) story. The pair love what they do and envision themselves as invincible.

And then Duplicity turns against the norm. In a movie that adores a swerve and no one is who they claim to be, Duplicity is certain to keep that motif until the end. In those final moments, it’s still not certain the star couple share feelings for one another. They probably do, or maybe sharing their skills and duping one another affords them a continual high. More likely, Roberts and Owen moved to the next gig, the next heist, the next job, never trusting – but possibly loving. 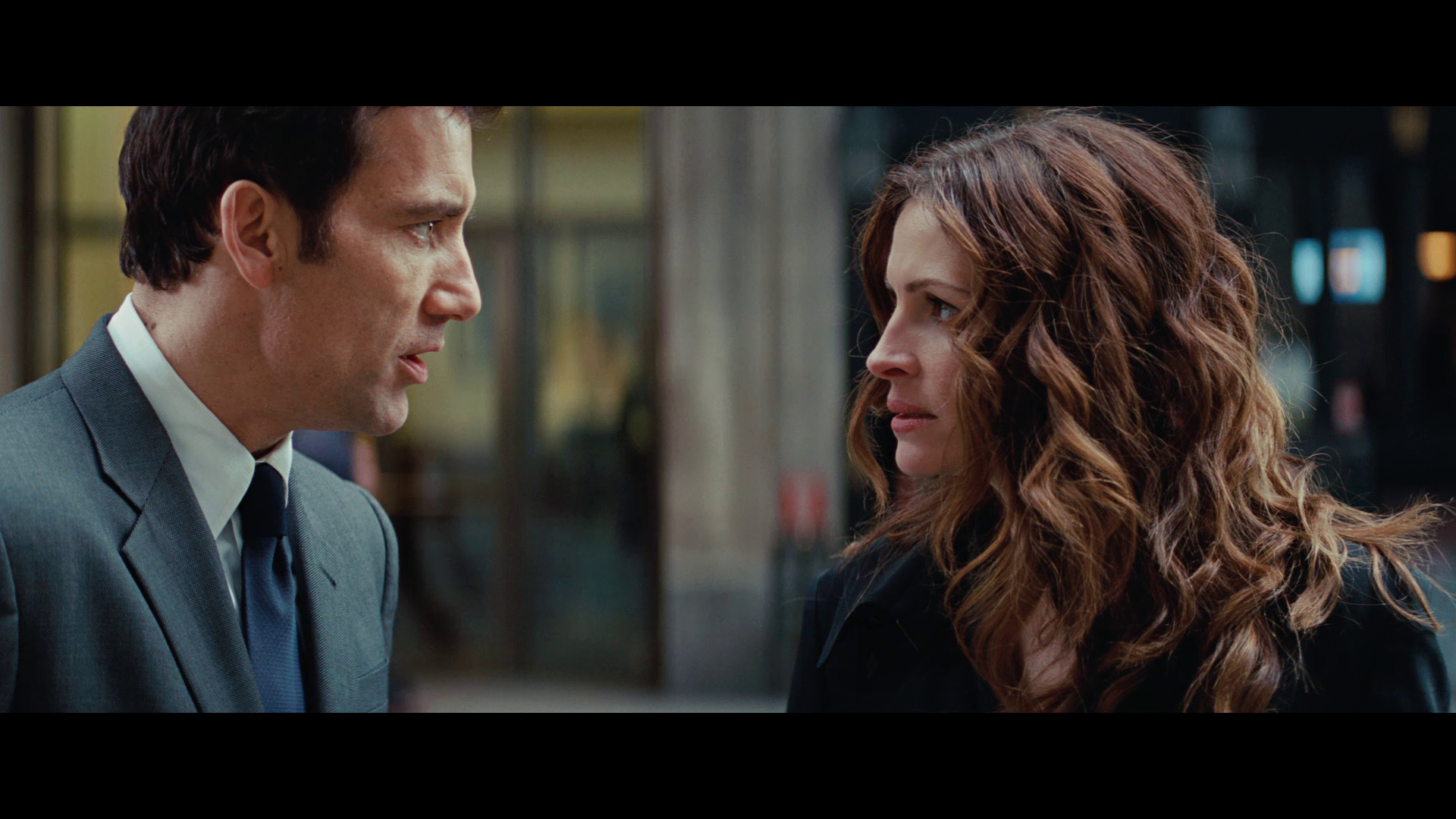 The initial Blu-ray release of Duplicity came from Sony back in 2009. That disc was encoded in VC-1; it was time for a do over. Here’s Mill Creek’s effort, now in AVC, if arguably more compressed than a decade before. In fairness, the chunkiness is minor. Mostly, it’s in shadows where artifacts take hold. A thin grain structure isn’t too much of a challenge, but still, the buzziness lacks a firm film-like look.

Placing Duplicity visually in the ‘00s is color grading, favoring an orange/teal palette that socks flesh tones with a hard orange and backgrounds with cold blue. Nothing changed for this release – that’s forever Duplicity’s aesthetic. A few scenes do break away, inviting primaries to make vacation spots pop.

Although driven by dialog, ambiance sticks around. Cities fill the DTS-HD soundstage. On beaches, waves roll in from the background. Crowded offices keep activity moving, whether working printers or ringing phones.

A dash of range comes from the score, driving the low-end deep with success. The rest takes up place in the center, sending clean conversation through without impediment or balance concerns.

Fun, vibrant, and sophisticated, Duplicity tells an unorthodox romance set against the backdrop of corporate espionage.

The 15 unaltered images below represent the Blu-ray. For an additional 13 Duplicity screenshots, early access to all screens (plus the 100,000+ already in our library), 100 exclusive 4K UHD reviews, and more, support us on Patreon.