Toys have played a huge role in shaping American childhoods since the Baby Boomer generation. Brands like Barbie and Star Wars have become cultural institutions, creating fanatic collectors and a growing nostalgic awareness for the toy lines.

Always present in pop culture to some degree, this trend popped to the mainstream in 2012 when the Travel Channel first ran the Toy Hunter series. Its focus on collecting vintage toys brought renewed interest to examining the historical legacy of such influential brands as LEGO and G.I. Joe.

After Toy Hunter was canceled after three seasons, collectible toys and their history became increasingly covered on YouTube programs. Creator Brian Volk-Weiss saw an opening and with Netflix’s backing stepped into the field in late 2017 with The Toys That Made US.

…an excellent vehicle for recalling many fond memories from childhood

Going inside the biggest brands in toy history, the eight-episode documentary series details the inside story of such toy lines as Kenner’s Star Wars and Mattel’s He-Man. Featuring new interviews with the businessmen and creative designers behind famous toy brands, along with a litany of toy experts and people in the field, The Toys That Made Us takes a deep dive into how the beloved toys came about behind the scenes.

The adults that grew up with these toys get a fascinating perspective on their favorite brands, often more the result of luck and circumstance than planned design. The Toys That Made Us is an excellent vehicle for recalling many fond memories from childhood. Most everyone has a few special memories related to their favorite toys growing up. Often taking a sweeping approach to its subject matter, each episode has dramatic re-enactments of pivotal moments in toy history, alongside new interviews with talking heads that were directly involved.

Executives and designers from all the big toy companies, including giants such as Kenner, Hasbro and Mattel, open up in candid interviews about the strategic decisions that paid off and the ones that cost them. Learn why Kenner made their Star Wars’ figures the now familiar 3 and 3/4 inch size, and the horrible deal struck by Stan Weston that cost him millions, the original creator of G.I. Joe back in the 1960s.

The eight episodes from these first two seasons of the show cover the following toys: Star Wars, Barbie, He-Man, G.I. Joe, Star Trek, Transformers, LEGO, and Hello Kitty. Every episode attempts to tell a narrative and loose story within the confines of discussing each toy line. A vaguely annoying narrator keeps everything together.

The Toys That Made Us is a fun documentary series that provides an accurate overview of toy history. It’s not perfect, there is more of a focus on business issues behind the scenes than the toys themselves. However, a wealth of good information is covered that fans will enjoy and the toys themselves are treated with reverence. Every toy line has a rich history and all became successes in different ways.

There is less fan and collector involvement than you might expect, albeit creator Brian Volk-Weiss clearly loves the subject matter and that shines through in every episode. The narration by Donald Ian Black could be smoother and more polished. His voice begins to grate after a few episodes. 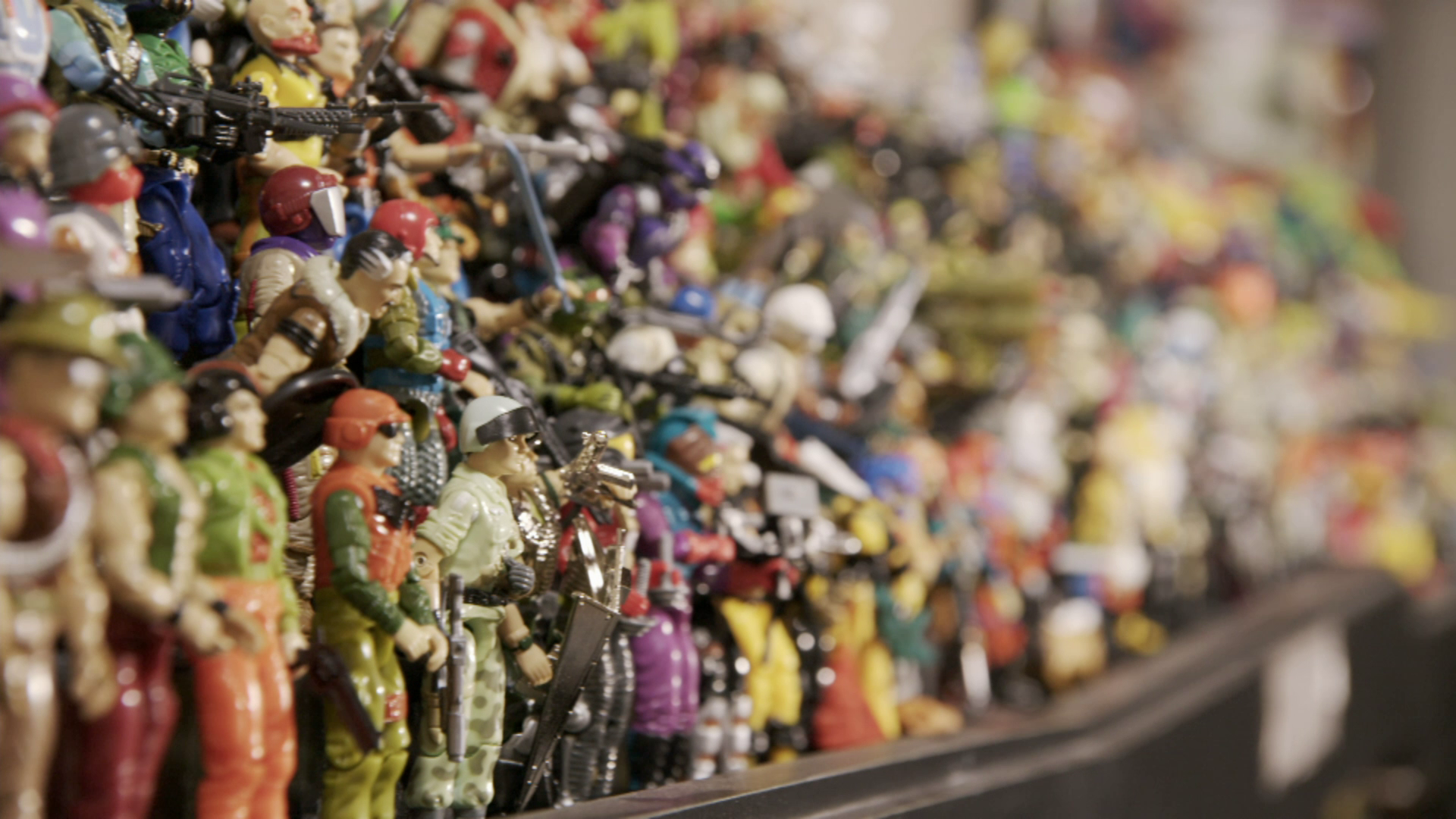 The eight episodes of seasons one and two are spread over two BD-50s, leaving the bonus material for a separate BD-25. The transparent AVC encode is flawless, cleanly replicating the pristine, if pedestrian, Hi-Def interview footage. Presented at a combined 1.78:1 aspect ratio for the new HD footage, the vintage toy commercials are kept in their original 4:3 compositions without stretching or scaling.

One picture quality issue is how poor some of the archival standard-definition material appears. It’s evident the producers often used little more than VHS recordings, or even YouTube rips, as sources for the barely serviceable clips. It’s jarring when the new interview footage, razor sharp and ringing with clarity, cuts to a vintage G.I. Joe or He-Man toy commercial from the 80s.

Many of the interviews are filmed in the participants’ own homes. There is a low-budget feel to the documentary series that doesn’t grossly impact the overall video quality. If you caught The Toys That Made Us on Netflix, nothing in the video looks much changed.

The Netflix documentary series comes on Blu-ray with perfectly adequate 2.0 DTS-HD MA. The limited sound design features clean, intelligible dialogue from the talking heads and narrator. The stereo mix has loud sound effects and limited separation. This is serviceable audio for content not designed to be immersive or overwhelming.

New niche distributor Screen Media includes a limited edition collectible with The Toys That Made Us on Blu-ray. Arriving in an over-sized cardboard box, a small replica retro CRT television from licensed toy manufacturer NECA is included. The three-disc BD set comes inside, able to exist on its own after most chuck away the larger outside packaging. A separate DVD set is available, though it doesn’t include the collectible item.

Fanatic collectors that prefer pristine packaging may get nervous when Amazon, notorious for their shoddy handling practices, ships this item in their flimsy mailers.

Over an hour of special features are included, from short featurettes to deleted content that didn’t make the final cut.

Featurette With Show Creator Brian Volk-Weiss (08:22 in HD) – Go inside Brian’s toy cave as he explains how the show came to be, pitching Netflix until a deal happened.

Peter Cullen Extended Interview (06:33 in HD) – The legendary voice behind Optimus Prime, Cullen explains his increasing fame and being recognized by fans on the street.

Deleted Scenes (All in HD) – A play-all option is available for this cut footage, but only if you skip through the preceding featurettes. Most of the following scenes run no longer than 60-120 seconds.

Star Wars Revenge of the Jedi

Barbie A Bad Case of Worms

The Toys That Made Us

A delightful look back at everyone’s favorite toys and toy brands.

The 15 unaltered images below represent the Blu-ray. For an additional 39 Toys That Made Us screenshots, early access to all screens (plus the 100,000+ already in our library), 100 exclusive 4K UHD reviews, and more, support us on Patreon.