Ever Talk to a Corpse?

David isn’t really a werewolf. It seems like it – after all, he spends a night in agonizing pain, growing out limbs, fangs, and hair during American Werewolf in London’s iconic transformation scene.

Consider the circumstances though. Along with a friend, David (David Naughton) travels to Scotland, walks to a questionable bar, sees a pentagram on the wall, this while the locals spin fear-mongering legends. The idea instilled, David sees his friend murdered, the trauma bolstered by the sensationalized stories fed into his mind.

Full moons, gruesome kills, howling; American Werewolf in London brings those pieces of Universal Monsters lore along. But David’s story is one of terror, PTSD that gives him ludicrous dreams of Nazi wolves invading his home, and conversations with his decomposing dead friend Jack (Griffin Dunne). David is losing it.

Those voices in David’s head keep saying to kill himself – stop the werewolf bloodline. In a sense, David is fine. He’s taken up residence (and romance) with a nurse and proclaims his love for her; for his age, he seems well off. When alone with his thoughts though, those images, those voices keep coming. Without support, David struggles; it’s a total mental collapse, started through shock, fed by fiction.

No one knows what to do with David. That’s a depressing consideration. Police refuse to act even as David begs to be arrested, clearly losing his sanity. It’s not so much a matter of believing in werewolves so much as helping those who think they are one. A lost kid from the US finds himself trapped in his own mind, but other than his lover and a doctor (who himself needs convincing), no one seems to care.

For what starts in a small pub, American Werewolf in London bleeds over to Piccadilly Square. Traditions in rural areas bleed into the city, leading to a sequence of Landis’ signature chaos. Plenty of people die (flying through windshields, run over by cars, falling out of a bus), yet the horror is that David’s situation ever made it that far in the first place. 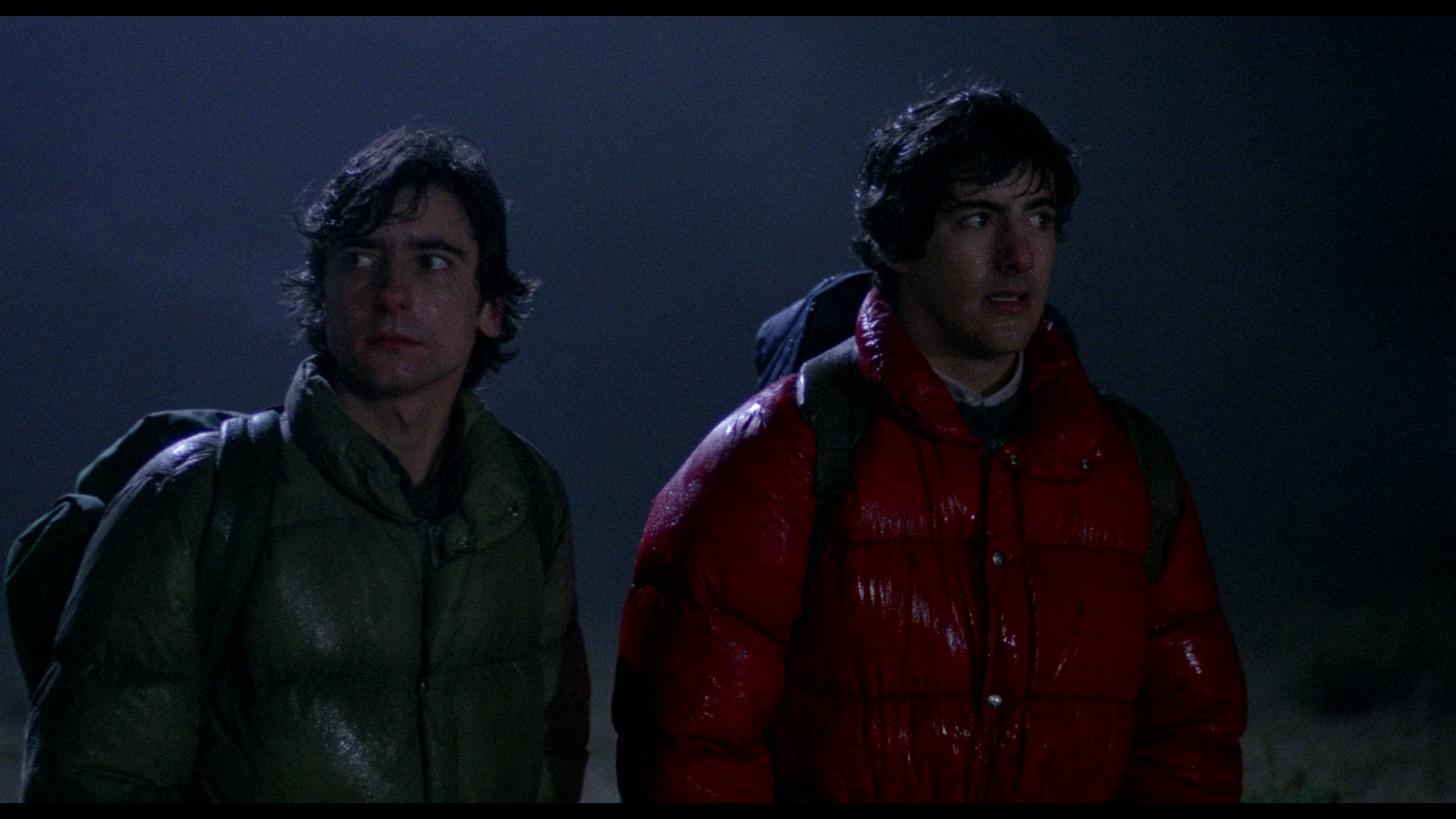 Arrow issues a recent 4K scan with this Blu-ray release, cranking up resolution to draw out gobs of detail. Things like facial definition stand out, boosted appreciably over any previous release. Precision (and fluctuating) grain carries more organic feel thanks to a clean encode. Then, the make-up effects brings even better detail to this classic, bolstered by this scan, and holding up under the scrutiny of modern restoration.

Secondary is color, if no less dramatic a jump in quality. Saturation blooms the red in David’s coat without bleed. Flesh tones appear cleaner and natural compared to previous discs. The few shots of Piccadilly give new life to the neon ads. The kid’s balloons don’t hold back either.

That in turn means better contrast too, brighter when needed and likewise richer in shadows. Arrow’s American Werewolf in London doesn’t suffer from irritating crush, rather seeping into pure black with care. Depth is superb, and this one looks ready for the jump to HDR.

Choose between DTS-HD mono and 5.1. Other than for purists, the 5.1 mix expands the soundstage, adding tension to the first attack as snarls swirl around the scene. Panic in the finale spreads wide, with cars, horns, crashes, and more filling each channel. Directionality stretches American Werewolf in London splendidly.

This sure is a thing. Two commentaries, one with Paul Davis being new, the other with Noughton and Dunne a holdover, seems extensive, but that’s nothing compared to what’s coming. Mark of the Beast is a new look at the whole of Universal’s werewolf outings, running 77-minutes, and flush with interviews, including John Landis. By extension, a new interview with Landis filmed this year runs a little under 12-minutes. Also, there’s a second older interview with Landis that runs 18-minutes.

A look at some original surviving props runs eight minutes, while a video essay from Jon Spiro (11-minutes) explores American Werewolf in London’s Jewish side. Simon Ward and Corin Hardy chat about how the film affected them for another 11-minutes. Two interviews with Rick Baker combine for 19-minutes.

Beware the Moon is older documentary, some 97-minutes long, also awesome and rightfully included. An early EPK is probably the weakest thing on the disc, but it’s here because a complete set demands it. Some footage from Baker’s workshop as Naughton has his hand molded is great, and an image gallery holds a mammoth archive of stills. Some storyboard comparisons, silent outtakes, and host of marketing offerings bring this easy 5-star disc to its finish.

An American Werewolf in London

A John Landis classic tells a werewolf story with a comical tinge, but American Werewolf in London deals with trauma in a clever way.

The 15 unaltered images below represent the Blu-ray. For an additional 34 American Werewolf in London screenshots, early access to all screens (plus the 100,000+ already in our library), 100 exclusive 4K UHD reviews, and more, support us on Patreon.