A Shudder original that uneasily flirts between depressing period drama and British folk horror, director William McGregor’s Gwen is a bleak tale that will test your patience. An 84-minute film that feels much longer, the character-driven “horror” film has a cryptic plot with an unsatisfactory ending. Those looking for cheap thrills and B-movie scares should look elsewhere for entertainment.

What Gwen does have going for it are an excellent young actress in the titular role and great atmosphere, heavily steeped in the dismal farm life of Victorian-era Wales. McGregor’s film is well made, enriched by a moody score and fantastic mise-en-scène.

The thriller is better off classified as a harsh period drama, as picky horror fans will be bored to death by its measured pacing and lack of frights. Genre fans will mostly come away disappointed by its low-key scares. Think the somber and dry period tone of The Witch, but without any real hooks or horror trappings to get fans excited.

The plot concerns the harsh life of a single mother and her two young daughters, struggling to hold on to their family farm. Set in the rugged landscape of Wales, the outlook is bleak for the family. Elen (Maxine Peake) is barely holding on after her husband’s disappearance and develops a mysterious illness that frightens her daughters. A series of disturbing incidents begin threatening their isolated farm.

The young Gwen (Eleanor Worthington-Cox) can’t understand some of her mother’s behavior or increasingly erratic decisions. The narrative revolves around Gwen’s increasingly futile efforts holding the family together, watching over her younger sister. Playing out as a slow-burning mystery, some unknown entity is mysteriously slaughtering the local sheep population.

Playing into the family’s growing fears are the local quarry owners, greedy men with an eye on Elen’s farm. It’s clear the locals won’t help the family out, possibly fearing the powerful men that run the quarry. Unfortunately, the predictable storytelling goes exactly as expected with this scenario.

Delivering wonderful atmosphere and strong performances, something is missing from Gwen that would make it a whole movie. William McGregor’s stylish direction can’t make up in the end for his less-than-coherent script. The less-is-more approach sometimes works but here becomes tedious. Character-driven drama is fine when layered with the right elements. Gwen lacks a cohesive message beyond the harsh life depicted for its central protagonists. 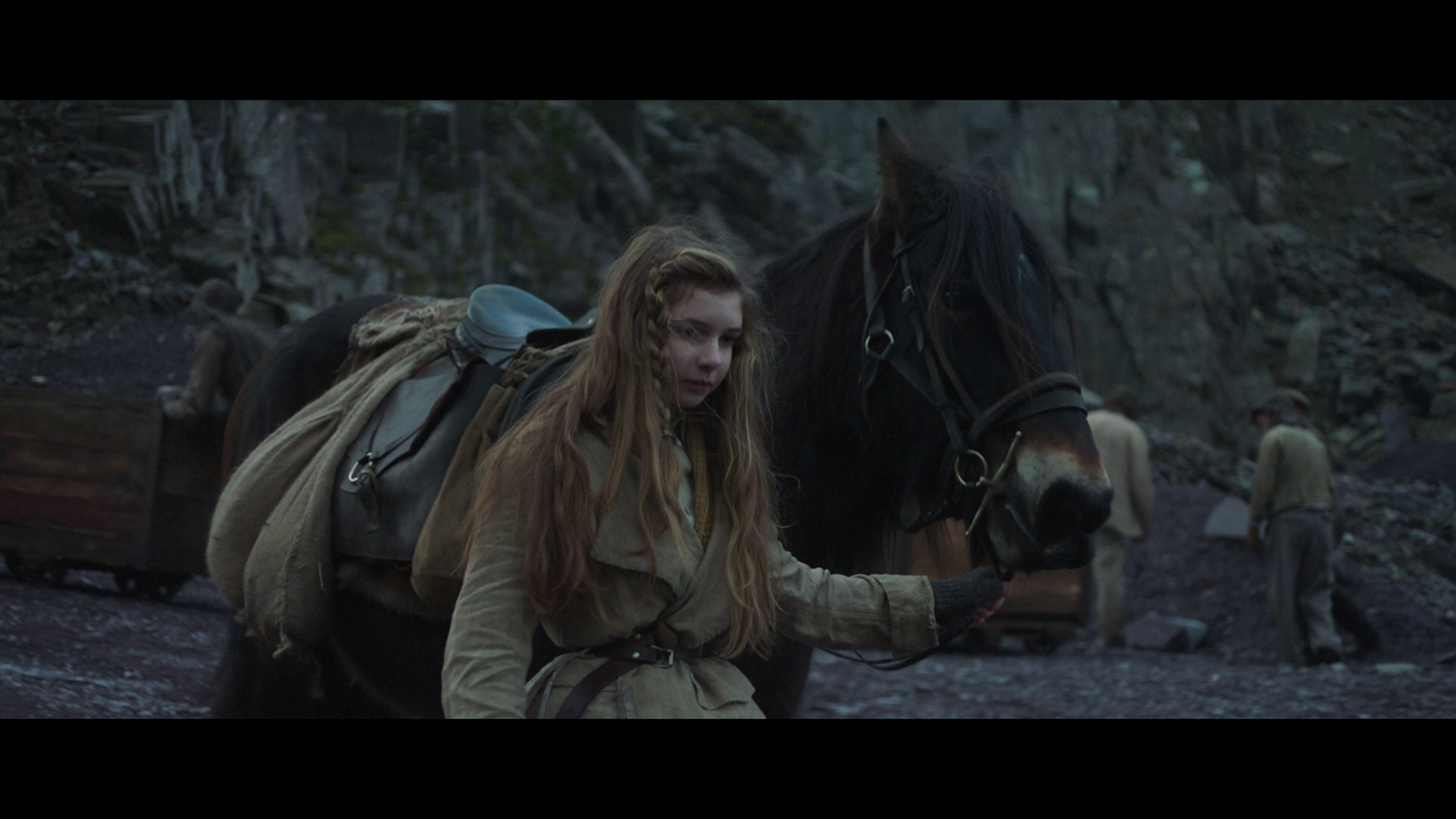 The dark, brooding cinematography is excellent in Gwen, taking full advantage of the foreboding landscape in Wales. It is practically a character unto itself in the period thriller. The 2018 British film has a murky color palette, awash in dismal greens. Drained of primary colors and mildly desaturated, flesh-tones are on the very pale side. This is the opposite of a warm and inviting aesthetic.

Clarity is high for exterior shots, albeit shadow delineation and definition take a hit in darker interior scenes. The 1080P video arrives in the film’s proper 2.35:1 aspect ratio.

Gwen runs 84 minutes, encoded in occasionally sub-par AVC. Despite the encode having a BD-25 mostly to itself, chroma noise and other compression artifacts intrude on select scenes, especially in the dim night shots. RLJ Entertainment’s Blu-ray releases have had a few issues before with poor encodes.

Without many obvious special effects, Gwen’s picture quality has steady detail and an even consistency. The indie production doesn’t leap off the screen with fantastic definition, but provides serviceable Hi-Def video in an adequate transfer without notable flaws.

The grim movie’s best attribute is probably its moody original score by James Edward Barker, heard in fine-sounding 5.1 DTS-HD MA audio. The dialogue-driven period drama avoids discrete audio design. Dialogue remains intelligible, if subdued in the mix. The mix is heavy on atmosphere as the wind constantly howls across the harsh landscape of Wales. The familiar sounds of farm life, including sheep, are heard as background elements.

Distributed by RLJ Entertainment, Gwen arrives on Blu-ray with a slipcover. A 30-day free trail for Shudder, the horror streaming service, comes included.

An interview with Maxine Peake (12:14 in HD) – The actress discusses her Elen character, the local Welsh dialect and her thoughts on Gwen’s plot.

An interview with Eleanor Worthington-Cox (08:39 in HD) – The eager young actress praises working with Maxine Peake, the physicality of her role, the period wardrobe and make-up, among other topics.

Behind The Scenes Photo Gallery – A series of twelve still shots you manually forward taken from filming on set.

Photo Gallery – Six pics from the movie itself.

The 15 unaltered images below represent the Blu-ray. For an additional 12 Gwen screenshots, early access to all screens (plus the 100,000+ already in our library), 100 exclusive 4K UHD reviews, and more, support us on Patreon.