Exploding the boundaries of conventional superheroes made for the screen, Doom Patrol takes creative risks and delivers one of the most important, and successful, comic book adaptations in television history. Approaching the genre with a sophistication rarely applied to super-powered humans traipsing around in costumes, Doom Patrol is a triumph of mature storytelling aimed at adult audiences bored with the latest Marvel films.

Inspired by writer Grant Morrison’s legendary run on Doom Patrol from the late ’80s, season one takes mostly unknown comic book characters like Robotman and Rita Farr, brilliantly giving them life on the screen. Developed as fully fleshed people with insecurities and personalities, the show respects their roots on the page without slavishly feeling beholden to it. Doom Patrol’s surreal adventures have the dysfunctional superhero team traveling in time, getting swallowed into a donkey (don’t ask), meeting a sentient street (really don’t ask), and more in this wonderfully captivating first season.

Bold storytelling and a willingness to color outside the lines makes Doom Patrol one of this decade’s most invigorating superhero programs. Using quirky characters largely unknown outside of hardcore comic book circles, the compelling drama and tightly crafted superhero narrative make Doom Patrol something special for fans.

…the rare program that combines both substance and style, capturing its superheroes’ innate humanity

Having come after Titans on the new DC Universe streaming service, spinning out of a series more focused on traditional superhero action in costumes, no one could have foreseen the difficult-to-adapt comic book property translating so well on serialized television, while building upon it in logical and creative ways.

Doom Patrol’s first season has fifteen episodes, introducing the world to its largely unknown superheroes, an eclectic mix of outcasts and misfits bonding together in Cloverton, Ohio. While the Doom Patrol isn’t the Justice League, or even the Teen Titans, Cyborg is added to the Doom Patrol for the purposes of television. Cyborg slides right into the Doom Patrol like he’s been a member for years. Having seen Cyborg in various incarnations for four decades, it’s the first time I’ve really cared about Vic Stone in any medium.

Brought together by the mysterious Dr. Niles Caulder (Timothy Dalton), the rag-tag collection of individuals in the Doom Patrol are outcasts from society. The members have been shunned in the past for either their freakish appearance or bad behavior. The quirky line-up includes the aforementioned Cyborg, Robotman (hilariously voiced by Brendan Fraser), Rita Farr, Crazy Jane, and Negative Man. The star-studded cast includes Diane Guerrero, April Bowlby, Joivan Wade, the always amusing Alan Tudyk, Matt Bomer, and Brendan Fraser.

Doom Patrol goes beyond conventional superhero action, delving into these characters’ psyches for some of the best character development ever seen in the genre. There’s Cliff Steele, the former race car driver struggling with the fact he now exists only as a brain controlling a robot body as the hulking Robotman. A former movie star from the ’50s, the shallow Rita Farr lost her career when she accidentally gained powers in Africa, losing the ability to control her newly elastic body. Now she melts into a bag of flesh whenever under pressure or stress.

Special mention should go to Diane Guerrero and her amazing performance as Crazy Jane. Crazy Jane has 64 distinct personalities, each with their own unique superpower. Guerrero is a revelation, tasked with portraying dozens of different personalities. Her portrayal of Crazy Jane deserves an Emmy.

Doom Patrol is the rare program that combines both substance and style, capturing its superheroes’ innate humanity. When people slam superhero movies as trite kiddie fare, point them to Doom Patrol’s engaging drama and fascinating adventures. 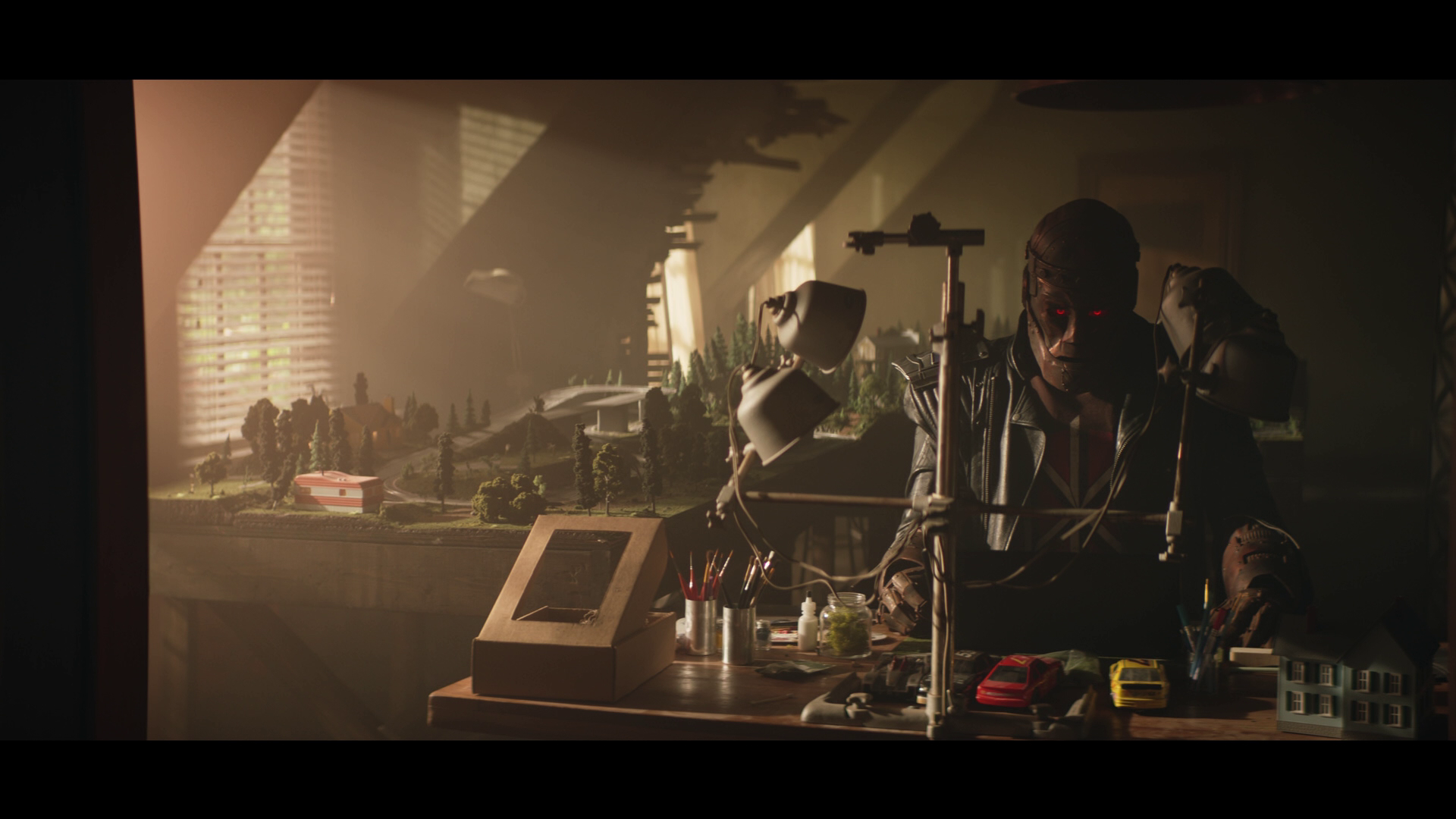 From the brightest highlights to the darkest blacks, Doom Patrol’s video is impeccably graded and mastered. There is a sophistication and nuance to Doom Patrol’s color grading befitting a high-end prestige project on premium cable. The special effects are well done, seamlessly integrated in perfect transparency. Presented in an eye-pleasing 2.20:1 composition, this is a high-quality production.

The unbelievably consistent 1080P video has perfect black levels and an inviting contrast. Impressive depth and dimensionality help the razor-sharp presentation reveal significant organic detail, without taking on a sterile digital tone. This is flawless cinematography, aided by superb lighting and a pristine digital intermediate.

Production values on Doom Patrol appear improved from Titans, DC Universe’s first television show. The two shows do not share the same aesthetic – Titans had a desaturated, glossy tone that went for extreme clarity. Doom Patrol’s top-notch picture quality is only hampered by mild banding, an unfortunate side effect of the generally low bitrates seen in the AVC encode from WB. All fifteen episodes of season one are spread over three BD-50s.

Great care has been taken with Doom Patrol’s 5.1 DTS-HD MA soundtrack, a first-rate example of imaging and coherent mixing. Sound and audio placement is excellent in the surround mix. The soundstage envelops listeners, immersing them in a well-mastered sonic blitz that nicely balances both score and occasional music with intelligible dialogue. Bass is tightly integrated in the mix, providing the necessary thunder and boom when needed.

Optional English SDH and Spanish subtitles play in a white font, always residing within the 2.20:1 composition.

Online streaming outlet DC Universe’s second new exclusive series hits Blu-ray in a snazzy three-disc set that identically resembles other recent WB television releases on the format. All three discs are housed in a single case, arriving in the line’s traditional cardboard slipcase. A one-page episode guide insert has a mini-synopsis for each episode.

The included digital copy gives you the entire season in HDX quality, either on VUDU or FandangoNOW. With this year’s passing of UltraViolet, no further digital rights are granted.

Doom Patrol receives a paltry line-up of special features, even less than the skimpy set fellow DCU show Titans received on Blu-ray. For such a high-quality show worth exploring and analyzing, the special features are a disappointment.

Gag Reel (04:35 in HD) – A series of bloopers, gaffs and general frivolity by the Doom Patrol cast filming their lines. Standard stuff barely worth watching.

Doom Patrol: Come Visit Georgia PSA (05:06 in HD) – You know budget cuts have been made when a PSA about the show filming in Georgia is the most substantial featurette. A few crew members discuss location shoots for certain episodes.

Unaired Scenes – Spread across all three discs, small unaired scenes from episodes 2, 8, 11 and 15 are included. Largely filler, these are scenes that on their own aren’t very entertaining.

Disc 3 Unaired Scenes (08:15 in HD) – Seven scenes in total, including several from the season finale.

This is superhero entertainment made for fans bored with the sanitized and mainstream approach favored by Marvel Films, told with both substance and style.

The 15 unaltered images below represent the Blu-ray. For an additional 33 Doom Patrol screenshots, early access to all screens (plus the 100,000+ already in our library), 100 exclusive 4K UHD reviews, and more, support us on Patreon.