In 2007, a documentary titled Who Killed the Electric Car? told the story of how various entities combined to keep fuel-based vehicles the standard. A few years later came Daybreakers, a movie where corporate vampires rule the world but begin starving for human blood. That blood is oil. The posh CEO (Sam Neill) is an amalgam of car execs and oil barons. It’s a little much.

The savior to Daybreakers is an overwhelming sense of style, shot with significant vintage flair and obsessed with capturing the heyday of cinema’s noir period. Plus, a dash of weirdness from Willem DaFoe who plays Elvis – and even sings a few lines – to give Daybreakers a touch of needed surrealism in a film that’s too often stuffy, or a bit full of its high concept.

Not that Daybreakers lacks merit. Upon release in 2009, America was stuffed in a recession and fought a war over oil. There’s a scene in Daybreakers when corporately-commanded military handcuff starving vampires to one another, drawing the prisoners toward sunlight to burn. Beforehand, a quick newscast clip interviews people, wondering why those poor or starving deserve to eat/drink. More than allegory to fuel or dwindling resources, Daybreakers smartly embellishes the wealth gap by defining life in dollars. A touch of fascist corporate behavior hangs over the entire movie.

Clever uses of light, droll color, and fondness for shadow give Daybreakers a minimalist, sleek look

A near decade after Daybreakers directors Michael and Peter Spierig directed Winchester, a rather ludicrous ghost story about gun control – a gun business heiress is haunted by ghosts of those killed by the family’s products. Knowing that and looking back to Daybreakers, their political lines no longer exist in question.

With Daybreakers though, it’s a relentlessly gory tale in vampire lore, creative too, celebratory of the outlandish bloodshed while determined to maintain a morose aesthetic. That it certainly does. Clever uses of light, droll color, and fondness for shadow give Daybreakers a minimalist, sleek look that says both restrained and near future. That’s important, giving the vampires a sense of superiority via their smart homes and upscale furnishings. Therein sit the men still in power, willing to torture or kill to maintain their positions, while humans (and the starving) make due in the streets.

For hero Ethan Hawke, his pharmacological duties toward a cure eventually bring him toward a sense of right and truth – a takedown of power doesn’t happen from the top, but the bottom. It takes just one person with moral convictions as Daybreakers shows, through a dazzling sense of elegance and extreme political leanings. 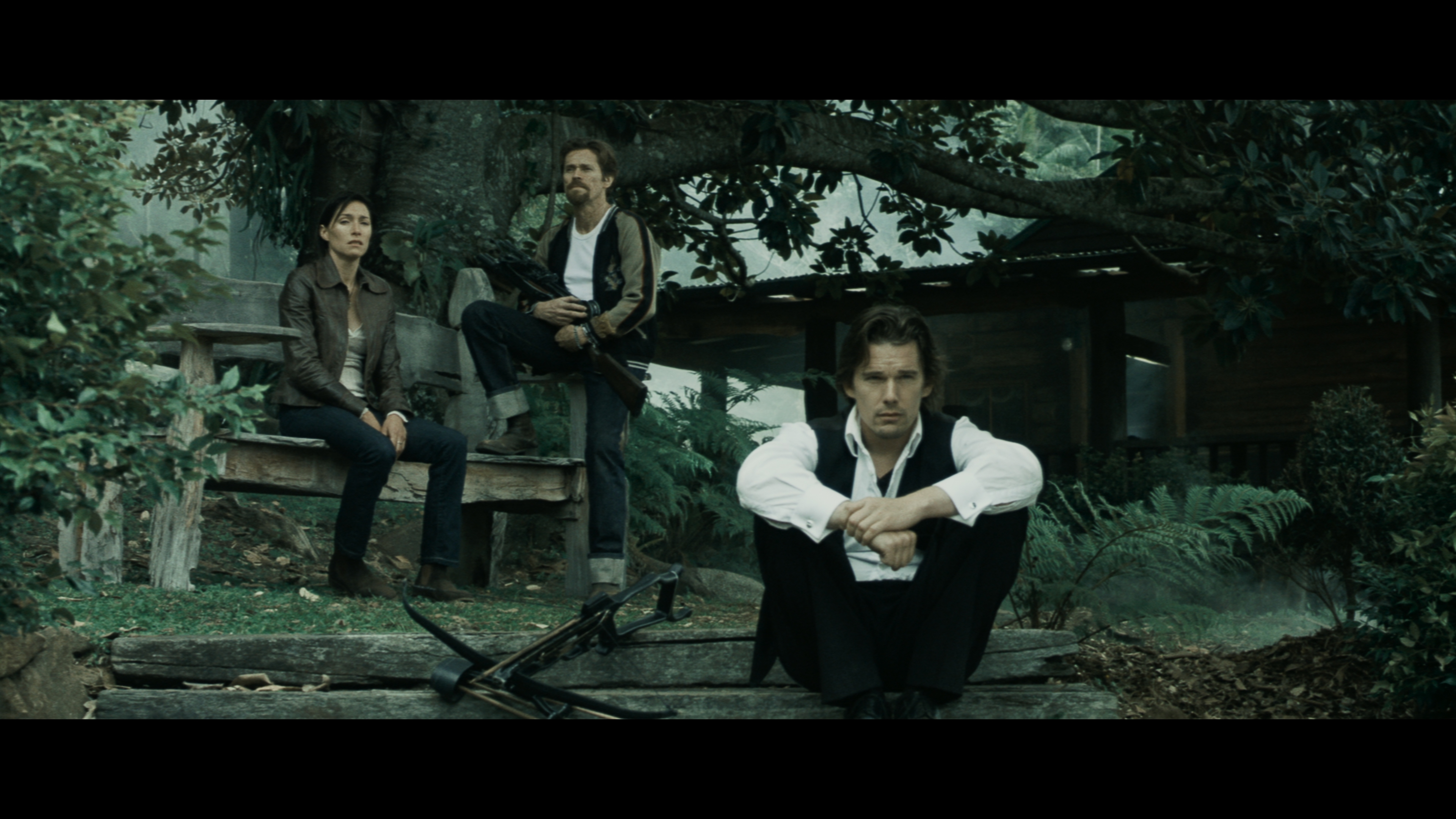 Given how Daybreakers looks, there’s no reason this on UHD. Part of that comes down to the intended style, notably soft and vintage. The mixed media source uses digital and film. Grain is consistent, noisier in some scenes than others suggesting those that used digital underwent a filter in post. Daybreakers never looks clean, always roughshod, in a constant battle with noise.

That’s fine for the sake of style, although this UHD looks generally untouched. Resolution from this 2K source appears abhorrently low – almost 1080p. Hmm. Then the Dolby Vision pass does nothing to elevate light, something so central to this story and plot. Sunlight carries a mild sizzle. Indoor lights do not look emboldened by this pass. It’s worth asking if Lionsgate tweaked anything in the format jump.

Powered mostly by blue and teal, reserved color disallows any intense saturation – again, by design. A handful of scenes utilize the opposite spectrum, layering warmth over scenery. Either appears monochromatic in style. Unlike other films sticking with such a look, Daybreakers, again, doesn’t offer an upgrade over Blu-ray. In other words, this isn’t an inherently bad transfer, so much as one that isn’t worth upgrading. At all.

Audible tweaks do noticeably pop up via this Dolby Atmos mix. Not all of them make sense – some helicopters panning the soundstage at eye level do so from the heights – while other instances deliver aural fun. With Daybreakers’ extensive use of exploding bodies, guts splatter in each channel while oozing through surrounds and overheads. There’s a car chase partway through utilizing speakers to bolster gunfire, well placed. Some rain effects truly sell the desperation in this city.

A commentary from the Spierig Brothers and make-up effects artist Steve Boyle is excellent, although it pales in comparison to the superlative two-hour documentary simply titled The Making of Daybreakers. This is split into four parts, and those split into additional sections as well. This is definitive.

The Big Picture is a short directed by the Spierig Brothers that runs 14-minutes. An art gallery come in last. As per Lionsgate’s norm, this is all featured on the UHD itself, although nothing here is new.

While the allegory is wildly overwrought, Daybreakers sense of impeccable style and creative worldbuilding help it stand out.

The following six screen shots serve as samples for our Patreon-exclusive set of 39 full 4K screen shots grabbed directly from the UHD: