DC’s Legends of Tomorrow returns with a reduced episode count in its fourth season, a victim of budget cuts and diminished ratings on the CW. Pushed back to January for its season premiere, the Arrowverse show was cut out of last year’s big Elseworlds crossover event with sister shows Arrow and Supergirl.

A lot has changed for the program over its brief run on the CW. What started out as a fairly straightforward superhero ensemble team, patterned after Arrow and other DC shows produced by Greg Berlanti, has morphed into a freewheeling comedy set in different time periods each episode.

Half of the original cast is gone, replaced by new additions like Nate (Nick Zano) and more recently John Constantine (Matt Ryan). Some characters have been completely re-written since their introduction, morphing to fit the less dramatic styling of the show’s new paradigm.

The new season has John Constantine becoming a permanent presence on the team of vagabond heroes, as they battle deadly demons like Neron with a much larger emphasis on magical enemies. As the Legends travel the timestream to historical events and encounter an unending parade of famous figures like Richard Nixon, they now have to contend with an added dose of wacky magical happenings.

Season four can be boiled down to the presence of two increasingly annoying characters: Gary and Mona. Employees of Ava Sharpe’s Time Bureau, these two non-heroes should be nothing more than occasional background characters. Alas, both receive unsatisfying and prominent story arcs.

Having abandoned any pretense that Legends of Tomorrow is a traditional adventure show about time-traveling superheroes, its show runners waste the addition of Matt Ryan’s perfect take on John Constantine. He inexplicably gets short shrift for characters like Gary. Instead of Constantine and other heroes engaging in deadly conflicts, Legends of Tomorrow delivers low-cost story arcs involving Gary and Mona. Some meta-humor about the reduced production budget even gets written into the episodic plots.

The reduced budget is a clear issue as the season develops if you want big superhero action and epic battles from Legends of Tomorrow. Characters like Ray Palmer (Brandon Routh) are almost never seen in their superhero costumes, and displays of powers are few and far between for the team of heroes. What began as a futuristic sci-fi program featuring a rag-tag group of superheroes, has become an ensemble comedy with each character playing period dress-up. If you enjoyed that turn for the show during season three, the producers go all-in with season four’s wacky humor.

Fans clamored for Matt Ryan’s addition to the series but his character largely goes to waste. After a decent start to the season, Constantine becomes another mere supporting player, ill fit for the show’s comedic tone. Which isn’t to say the season’s comedy doesn’t have highlights. One inspired episode has the Legends becoming puppets, playing out to hilarious results. 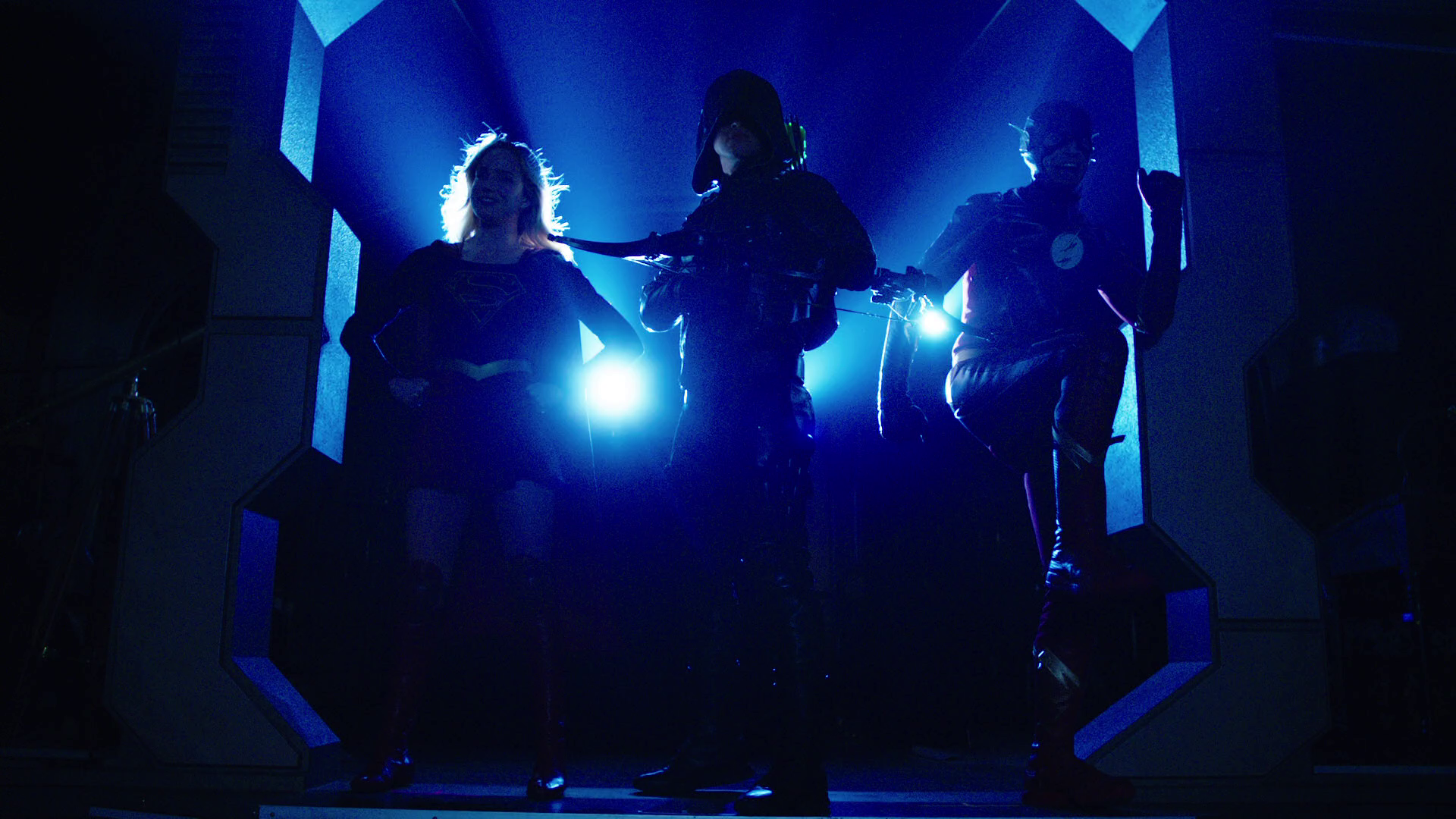 The video quality takes a hit in season four thanks to the production’s widespread budget cutting and Warner going cheap by cramming all sixteen episodes on only two BD-50s. That is just too many hours of 1080P content on two discs. Encoded in barely serviceable AVC running far too low bitrates, the otherwise spotless presentation is marred by banding and occasionally crushed black levels.

Outside of the vivid interiors shot inside the Waverider, location shots on Legends of Tomorrow have always been darker with contrast and definition issues. The 1.78:1 video largely mirrors the HD broadcast seen on the CW. This Blu-ray transfer has slightly more detail and definition, most noticeable in razor-sharp close-ups. It’s an adequate presentation of an inconsistently filmed television series with small nagging issues.

Guns, explosions, lasers – the sound design rings with convincing authority. LFE impact and extension are over the top, if anything. While the budget for season four took a hit, the excellent surround mixing hasn’t been affected.

Optional English SDH and Italian subtitles play in a white font. An Italian dub of all things has been included. Legends of Tomorrow must be popular in Rome.

Having been cut out of the annual Arrowverse crossover, the fourth season has a paltry set of special features on Blu-ray. All sixteen episodes are included on only two discs, arriving inside the traditional slipcase that has become a staple of all Arrowverse Blu-ray releases.

A digital copy is included, redeemable on either VUDU or FandangoNow. That is good for the entire season in HDX quality. A one-page leaflet insert details each episode with a brief synopsis.

DC’s Legends of Tomorrow: Legendary Storytelling (03:16 in HD) – Executive producer Phil Klemmer discusses the aims of having an episode set in ’40s Hollywood and how that shapes the show’s themes in this brief behind-the-scenes featurette.

Post Production Theater (05:06 in HD) – A wildly overproduced featurette consisting of footage with crew members standing in for cast members when shooting their FX shots.

Gag Reel (09:35 in HD) – See cast members goofing their lines and their generally inane behavior on set when something goes wrong.

Deleted Scenes From Disc 1 (09:51 in HD) – Fifteen inconsequential leftover scenes from episodes 1, 2, and 4-7 are included.

The 15 unaltered images below represent the Blu-ray. For an additional 24 Legends of Tomorrow Season 4 screenshots, early access to all screens (plus the 100,000+ already in our library), 100 exclusive 4K UHD reviews, and more, support us on Patreon.