After Supergirl added Lena Luthor and her devious mother to its cast of characters, fans began wondering when Lex Luthor, arch-nemesis of Supergirl’s cousin, would cause mischief in National City. Sagging ratings has the producers pulling out the criminal mastermind for the first time on television since Smallville.

Season four of the uneven but usually entertaining CW superhero series sees Jon Cryer playing a delightfully wicked and manipulative Lex Luthor, one of the show’s more inspired castings. Donning a bald cap, Cryer is a far better Luthor than Kevin Spacey or Jesse Eisenberg. It’s amazing how often WB has gone wrong in their supporting movie casts for Superman since hitting gold with Gene Hackman as Lex Luthor.

Taking inspiration from the excellent Superman: Red Son, an Elseworlds tale that has baby Kal-El landing in Soviet Russia instead of America, Supergirl’s writers gender flip that premise on its head with their own Red Daughter. A Supergirl clone raised by Lex himself in the fictional country of Kaznia, a convenient stand-in for Soviet Russia. She’s indoctrinated to believe Lex has her best interests at heart. What can the diabolical evil genius do with a fully powered Kryptonian at his disposal? Lex’s wicked plans have even Supergirl’s allies questioning her motives.

The biggest problem with Supergirl’s fourth season is that Lex Luthor couldn’t be in more episodes. This is the crafty and cunning Lex that has made him Superman’s number one nemesis. It’s a classic take on the arch-villain that takes its cues from Donner’s beloved movie without feeling beholden to the past.

Lex’s master plan with Red Daughter nicely develops over the back quarter of season four, aided by familiar names like Miss Tessmacher and Otis. It’s fan service to the first Superman that actually ends up working. And no one was more pleased than I when they have Lex suit up in his gaudy 80s battle suit from the Super Powers cartoon.

A common belief among Supergirl’s remaining viewers is that season four is eminently watchable and a minor return to form, after the up-and-down season three. Alex’s relationship drama is completely dropped in season four. The show strips Alex’s memory that she is sisters with Supergirl, drastically changing her role over the season. If you grew sick of the constant focus on Alex, season four is your answer.

Cryer’s Lex is perfect and the episodes with him are gold for long-time Superman fans, even if Superman is conveniently off-world when he causes trouble. Melissa Benoist continues to sparkle as Kara Danvers and when donning the costume. The ensemble cast expands once again, picking up lame versions of Dreamer and Brainiac 5. However, not everything is hunky dory.

While well intentioned, Supergirl continues to dabble with hot-button political themes that have driven away many fans from the show. This season sees the introduction of Ben Lockwood, a savvy political figure with an agenda. A new “hero” on the scene, Agent Liberty, foments anti-alien sentiment across National City.

If you watched the last two seasons, the formula largely remains the same and delivers reasonably fun entertainment if you enjoy these characters. The show is what it is by this point, outside of special event crossovers and guest appearances like Jon Cryer as Lex Luthor. 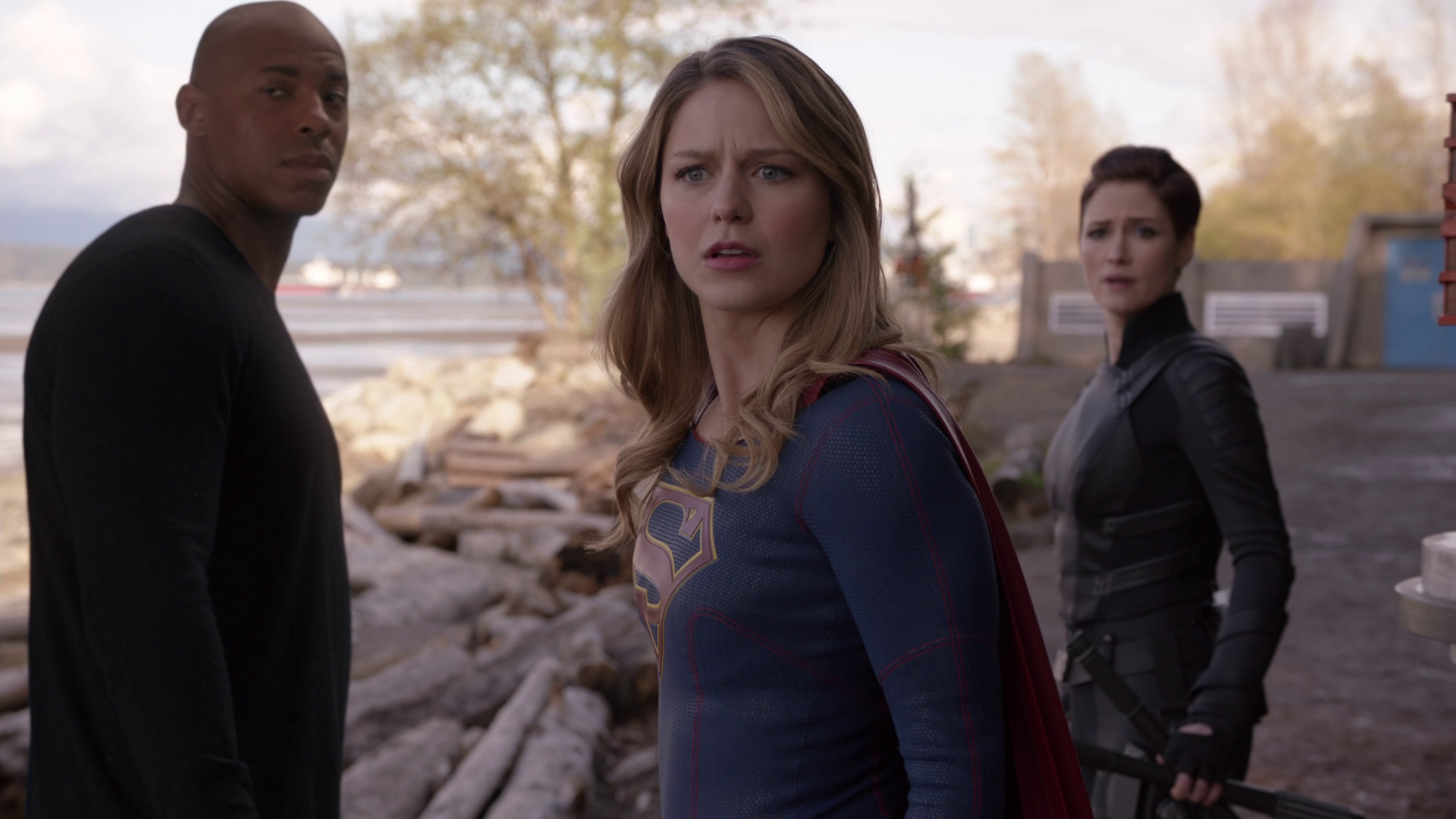 Always featuring the brightest and most open cinematography found in the Arrowverse, Supergirl’s general picture quality takes an appreciable bump up from preceding seasons. All 24 episodes of season four are encoded in adequate AVC, spread over four BD-50s.

There are no real compression artifacts outside of some dodgy CGI shots. The flawless 1.78:1 presentation exudes depth and dimension, containing some of the best fine detail and razor-sharp imagery found on the CW.

Something must have changed in Supergirl’s production behind the scenes since earlier seasons – even the VFX shots are sharper this season with stronger clarity and visual appeal. Rarely does an established television series get better looking but this Blu-ray set is proof it can happen. The unfiltered 1080P video oozes clarity and razor-sharp textures.

The primary 5.1 DTS-HD MA soundtrack makes excellent usage of the surround channels with a fully discrete mix better than most television fare. Solid LFE, fine dialogue placement, and an expansive soundstage make this one of the better-sounding Arrowverse shows on Blu-ray.

Supergirl’s fourth season takes form on Blu-ray in largely the same shape as prior Blu-ray sets from the show. The four-disc Blu-ray set packages together all 22 season seven episodes and the two bonus Elseworlds crossover episodes from Flash and Supergirl. Unlike previous seasons, DC’s Legends of Tomorrow was left out of the Elseworlds’ crossover event.

The set arrives in a slipcase and includes a digital copy that only redeems on VUDU in HDX. A one-page episode guide insert comes inside the case.

Beyond the various deleted scenes and a gag reel, the longer supplements are clearly designed to be shared between other Arrowverse Blu-ray releases and don’t necessarily focus on Supergirl per se. If you are buying any of the other Arrowverse sets, expect some duplication in the extras.

Villains: Modes of Persuasion (38:05 in HD) – A look at various villains from DC Comics in a variety of mediums. Villains like Lex Luthor, Deathstroke, the Penguin, Brainiac, the Joker and more are discussed by television producers and even a psychologist. Malcolm Merlyn and Deathstroke are the two Arrow villains to receive coverage in this far-ranging documentary that delves into what makes them tick as characters. This is a well put-together featurette that makes interesting points about the nature of villainy.

Inside the Crossover: Elseworlds (45:01 in HD) – This extended featurette consists of a panel moderated by Hector Navarro featuring various Flash, Supergirl and Arrow producers. They discuss the mechanics and challenges of pulling off the huge crossover event, introducing Batwoman into the Arrowverse, planning for the next crossover and other topics, including a brief conversation about the introduction of real world (read politics) issues into their shows. This is little more than a perfunctory discussion that barely touches upon anything interesting or substantial. Everyone involved looks a little awkward and hesitant to discuss issues or possible problems. A segment of clips featuring other DC professionals like Bruce Timm and Mike Carlin discuss the concept of Elseworlds prior to this crossover.

The Best of DC TV’s Comic-Con Panel San Diego 2018 (60:59 in HD) – I liked it better when WB would include the entire panel for each show. What we get here is an edited compilation of the Comic-Con panels for Supergirl, Arrow, Black Lightning, The Flash, and DC’s Legends of Tomorrow.

Deleted Scenes (All in HD) – Each disc has its own list of deleted scenes from Supergirl which aren’t playable within their associated episodes. There’s nothing here of huge interest for fans but it’s always a nice bonus.

Lex Luthor causes trouble for Superman’s cousin in the season’s primary highlight as some characters recede to the background.

The 15 unaltered images below represent the Blu-ray. For an additional 31 Supergirl: Season Four screenshots, early access to all screens (plus the 100,000+ already in our library), 100 exclusive 4K UHD reviews, and more, support us on Patreon.