While The World’s End lacks Shaun of the Dead’s comedic cleverness, it instead chooses a more somber, richer topic to finish the Cornetto trilogy. In that, The World’s End feels more genuine, authentic even, aside from the blue goo-blooded alien robots.

Where Shaun of the Dead explored an attempt to accept reaching 30, The World’s End deals with the reality of 40. Gary King (Simon Pegg) lives in the late ‘80s, refusing to relent to age or maturity. He kept the same car. He yearns for the town of his youth. Primarily he’s determined to run the Golden Mile – a dozen pub tour King did not complete decades prior.

In that comes a story of alcoholism, friendship, and depression. And through the body-snatching aliens, a means to reject being a bit stiff and proper – it’s important to break free from routine and reminisce once in a while. The World’s End finds that middle between King and friend Andy (Nick Frost), with one who needs to wind down, the other who needs to break out.

There’s enough juvenile brawling to make The World’s End feel proper to this (mostly) disconnected series. Puns help too. A few vulgar barbs go further still, all worth a laugh. But for the first half hour or so, it’s a realization of how life changes everyone. When aliens drop, the stiffness in their personality draws a clear connection to adulthood.

Doubly so, sci-fi elements force King to understand change. The first two pubs remodeled in the intervening years – corporate ownership took over. Nothing is the same except for King whose own ego refuses to see life moving forward without him. That, and he’s usually hammered.

After a touch of body snatching paranoia, it’s King and Andy staring down an alien leader. It’s up to these two to save Earth via verbal defense. There, the duo stare down their problems, admitting their own faults to explain why humanity is like it is – or, as drunk as it is. That’s a sensational touch, a little heavy-handed certainly, if escalating the thematic weight seen in Shaun and Hot Fuzz.

Nearly a decade passed between Shaun and The World’s End. These book-ends appear to capture the real world growth of director Edgar Wright and Pegg, turning their work mellowed from the cult shtick of zombies and treating sci-fi with appropriate respect. Sex gags, vulgarity, and violence aside, of course. 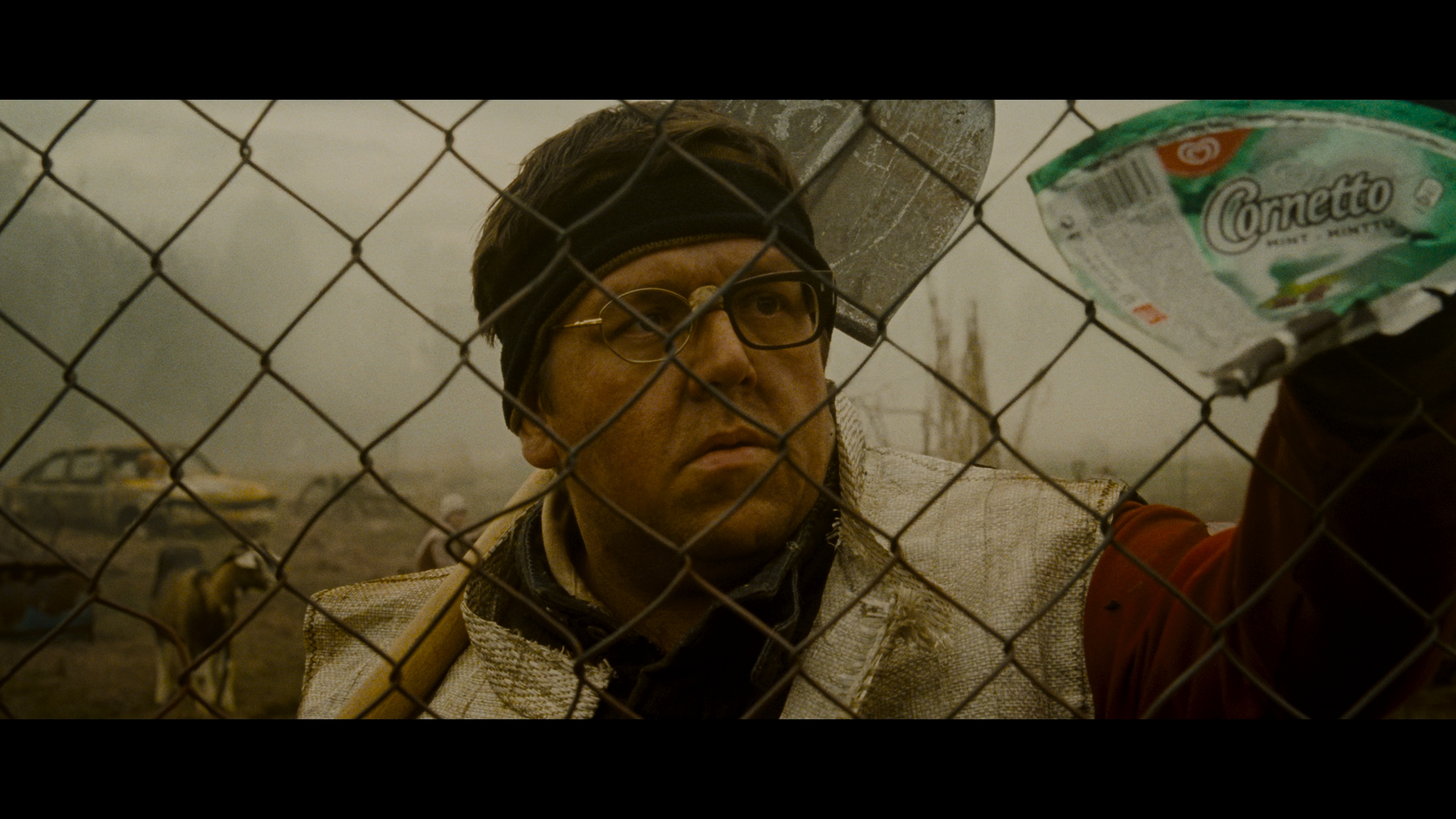 Universal doesn’t do much to The World’s End, although the jump to 4K allows for pure grain reproduction. Primarily shot on 35mm stock, the grain structure retains an organic feel for the full runtime.

Of the three films in this set, The World’s End wins in visual terms. Close-ups produce greater definition, even if sagging resolution limits sharpness from afar. Even for a 2K-finished source, The World’s End lacks the tightness of better, more modern outings – and this is only six years old. Funny how fast these things date themselves now.

Primarily interested in an orange/teal grading, reserved color sticks its landing with dense primaries. Flesh tones carry elevated warmth without being zealous, while other hues stand out for their punch. It’s pleasing, unlike the sedate HDR. In a movie with aliens slinging lights from their eyes, the total lack of zest in those highlights truly disappoints. Black levels drop to greater depths at least, occasional crush allowed thanks to bar lighting.

If the Blu-ray mix impressed, so too will the UHD. Although outputting at DTS:X, nothing notably changes. Height channels never notably enter the fray. That aside, it’s plenty active and rich. Every fight catches a rear channel or stereo as the cast rumbles with robots. Light ambiance adds sonic flavor, and a club sequence nicely fills the positionals.

Same goes for the low-end, punchy as needed, accentuating the soundtrack too. A bit lean and loose in spots, if made up by the cataclysmic climax that sends an explosion deep through a bass drop. Not spectacular overall, but sufficient.

It’s an Edgar Wright movie! What does that mean for the layman? It’s jammed with stuff (at least on the Blu-ray). On the UHD, Wright joins Simon Pegg for a commentary. For the rest, hop to the Blu-ray.

Getting into more feature-y stuff, there is a singular deleted scene and 10-minutes of outtakes. Alternate takes continue a stream of content removed from the main feature. Completing the Golden Mile is the main bonus attraction, 48 minutes worth of insights from cast & crew. Four featurettes follow focused on Edgar Wright, Pegg & Frost, the reuniting of familiar faces, and the creation of the Cornetto trilogy term.

Filling in the Blacks details the complexity of visual effects and stunt work for a half hour. Two sections of animatics drop back further to see early production, followed with hair & makeup tests, one of the few things here worth skipping. Footage from early rehearsals is entertaining, and stunt tapes split into three sections. Visual effect breakdowns split three ways for key scenes to continue the technical side of things.

Bits & Pieces finds footage unsuited to any other section of the disc and tosses it into this montage of randomness. There’s Only One Gary King is a mash-up related to the character. Signs & Omens is fantastic for having subtle hints and clues pointed out from the finished product. Edgar and Simon’s flip chart peers into the creative process from the origins on paper. Clips from a TV safe version are priceless, with a trivia track, still galleries, and trailers leaving even fans exhausted.

No, The World’s End isn’t the funniest of the Cornetto Trilogy, but it is the most mature and self-examining of the three.