Power is meaningless without truth. That’s what ultimately dooms Jafar in Aladdin, and also saving the title hero from a life without love. Jafar’s goal is to be someone he’s not; Aladdin’s is to admit hiding his “street rat” status hurts those around him.

A crisis of self runs through the center of each character. Truth brings everyone into alignment, Jasmine admitting law, tradition, and proposed suitors do not appeal to her. For Aladdin, he needs to accept it’s not status that defines people. Jafar’s crooked, narcissist ambition overrides worldly perspective.

At its core, Aladdin deals with poverty and inequality. Trying to draw equality between those living in a grandiose castle with citizens scrounging for food is an ineffective tactic though. On a rooftop, Aladdin and Jasmine simultaneously say they’re trapped, as if the reality of the spoiled princess compares to those starving.

Familiar and safe, yet Aladdin gets there with a sense of right

Consider though: Aladdin wins in the end. Someone with experience on the streets will undoubtedly help those in need. At least, that’s the assumption. What matters more is freedom – Aladdin no longer designated a thief but a hero, and Jasmine able to marry who she wishes. The latter upsets the usual fairy tale (Disney’s and otherwise). “I’m not a prize to be won,” Jasmine shouts, shutting down inherently sexist tropes about princesses, if still fawning for a man and in the end, becoming a drowning damsel. Baby steps.

In telling this story, Disney brings in the Genie, propelled by Robin Williams’ incredible enthusiasm for… everything. If Aladdin contains any downtime, it’s the Genie who picks things up in a dazzling display of animation prowess (as much as Williams’ efforts). Every scene with him becomes splendor. Entertainment value merges with artistry, both equal in their output.

Of course Aladdin ends in a comfortable, cozy, ever after cliché. Heroism and truth wins. Everyone gets what they want – the protagonists anyway. Familiar and safe, yet Aladdin gets there with a sense of right. For a tale about kings and kingdoms, rich and poor, genies and wizards, Disney’s spin brings contemporary splash. A parable against selfishness embeds between the overarching story of being yourself, and finding the best in that. Ultimately, it’s a “do what’s right in consideration of others” fable. Those who follow that path will get what they desire, and in telling so, Aladdin is all pencil-and-paint splendor. 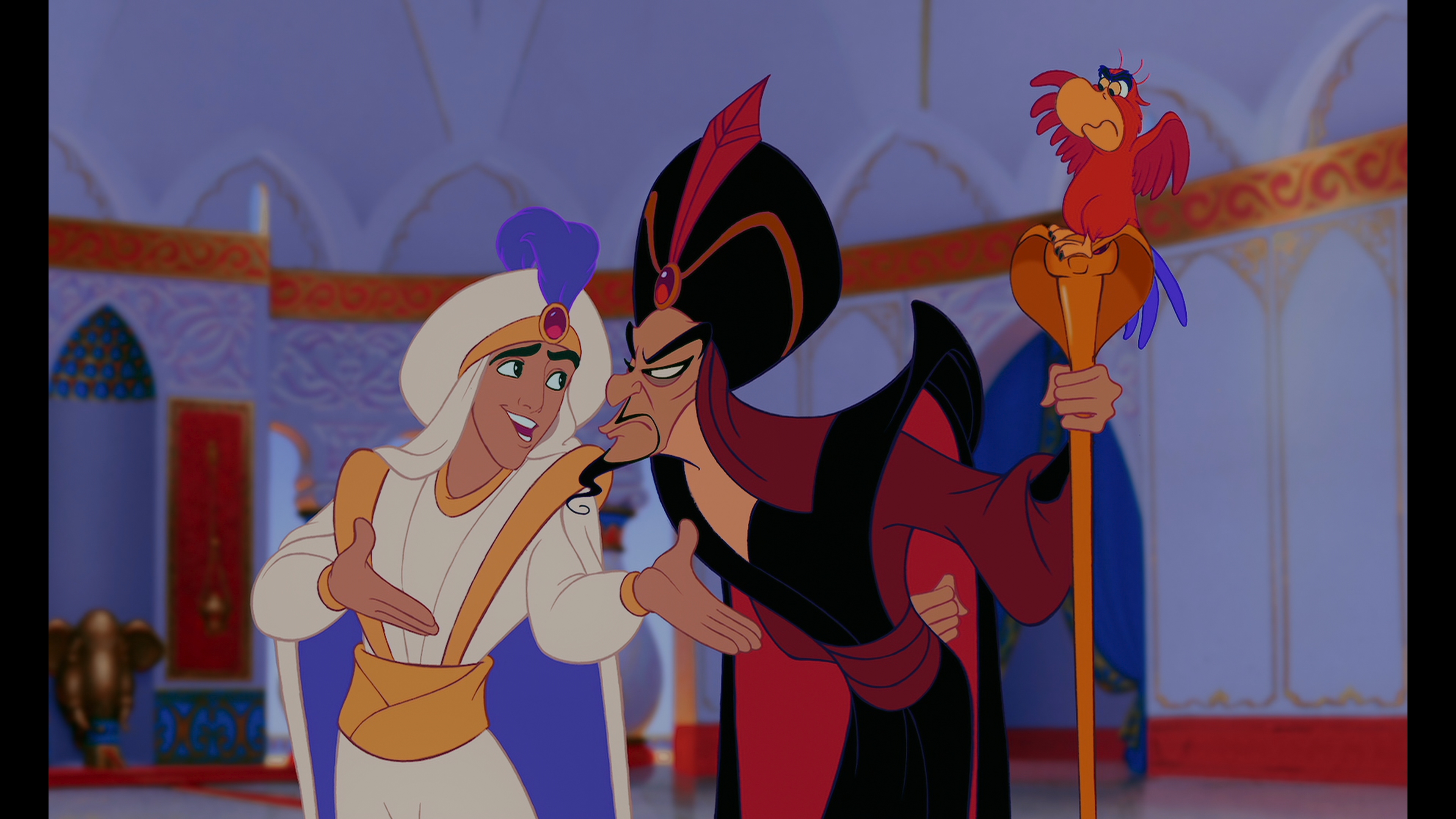 It’s clear Disney uses the same master as their Blu-ray release. The ringing identifies such. All shots with animated characters at even medium distance show signs of sharpening. Either a thin halo or visual echo limits the potential of a 4K release. That’s inexcusable.

Luckily, this isn’t a noise reduced, muddy instance like Little Mermaid on 4K but this isn’t pure like Lion King either. Aladdin turns into the middle tier release of the three, succeeding in close-up. There, pencil strokes and fine lines display rich detail. The same goes for backgrounds, and with better compression than Blu-ray, artifacting reduces to zero. Clarity is superb. Surprisingly, the CG elements hold up under 4K scrutiny.

Sadly, the jump to HDR does little to help. All of the magic dust, fireworks, and shimmering gold appears dim rather than intense. It’s a waste. Better contrast is noted, certainly with black, while the upper end doesn’t challenge what’s already available on Blu-ray.

Wide color does add pop, accentuating sunsets while bringing additional heft to primaries. Jasmine’s regular blue garb looks rich and saturated. Palettes rich in both red and blue dominate, brightened with more natural density in this release. Aladdin’s transfer takes as much as it gives.

A mess, at least in consideration of what might be were this mixed with better dynamics. LFE is crushed under an already low volume mix. Other than Genie picking up the castle late, low-end power never rises above dismal. There’s no energy to match the visuals of the collapsing cave, and squished power during songs. It’s a match between the animated and live action Aladdin.

But a few overhead uses stick out, specifically as the Sultan takes a ride on the carpet; he flies overhead and through the soundstage. The rest sticks with what came before, nicely split, if with somewhat restrained rears. At the peak, arguably the Prince Ali musical number, crowds fill each channel, an elephant stomps (lightly) in the sub, and vivid lyrics pour from the center.

Nothing new, and nothing on the UHD itself, which is ridiculous considering the two available commentaries. Those need to make an appearance with the 4K version.

Anyway, one commentary includes co-directors Ron Clements and John Musker with co-producer Amy Pell. The other comes from the animation team, making for two distinct chats about the film. An hour long series of featurettes cover the full expanse of the production.

A collection of Genie Outtakes honor Robin Williams with nine minutes of improv from the Genie role. It’s said he created 16 hours of material, so this is likely only a snippet. Still, it’s fun. Creating Broadway Magic delves into the stage show version and in 19-minutes, turns into a lavish commercial.

An obnoxious trivia bit, Unboxing Aladdin, has only a few tidbits worth waiting for. Genie 101 is a little more reserved, with voice actor Scott Weinger detailing each impression the Genie gives in the finished work. Ron & John gives the co-directors time to sit down and remember their time working on the film. These two are a great pair even if they’re only given six minutes.

Aladdin’s vivid fairy tale tells a simple fable about rich and poor, but layers that with various stories of finding one’s self.

The following six screen shots serve as samples for our Patreon-exclusive set of 53 full 4K screen shots grabbed directly from the UHD: