A Funny Sort of Day

When Simon Pegg and Nick Frost finally grasp Shaun of the Dead’s zombie outbreak, Frost runs in the house and grabs a box of records. Never mind the availability knives somewhere inside. No, they have records, but only certain ones; they have time to pick out dud albums since the undead only meander forward.

Shaun of the Dead loves the zombie genre. Spoofs cannot work unless the creators do. Here, it’s the shambling (or “shambolic” as the newsman says) ghouls who give their potential meals hours to escape. Being killed by one of these barely cognizant, hardly upright things is funny enough.

Also like the genre, Shaun of the Dead means something. Under the opening credits, hobbling workers push carts in parking lots and, blankly staring, scan items at the register, an utterly banal living. These adults find themselves in a dissatisfied, static rut. Pegg plays one of them.

When the outbreak happens, Pegg doesn’t notice. His morning custom (shopping at a convenience store) is done via muscle memory. Complacency inflicts Shaun of the Dead’s world. Instead of George Romero’s communists or consumers, Shaun of the Dead uses white-eyed living dead to represent adult life at its most ordinary.

Shaun of the Dead’s trick is cyclical humor, wasting no opportunities to swing a joke around twice

That’s cause enough for Pegg to take charge, doing so out of love for his ex-girlfriend, but also because he silently admits she’s the only way out as he nears 30. By the end, only those survivors willing to break from their shell and move forward with their lives see the next day. The rest die, killed directly via their need for complacency, and indirectly by zombies. Then for the final laugh, the ending shows it was everyone around the survivors at fault. With everyone in their lives gone (or eaten, actually), life goes that much smoother. It’s a smarter script than given credit for, awash in observant, clever sociological ideas, a fine sense of character progression – and hilarity.

The trick is cyclical humor, wasting no opportunities to swing a joke around twice. A set-up in the first act translates into a third act gag. Maybe it’s a line, maybe it’s visual gag, or even the soundtrack. Shaun of the Dead will find a way to ingeniously recycle material. Plus, it’s skillful storytelling. Pegg’s morning replays twice, same camera movements, same positioning, same actions, if with entirely different results.

Is it low-brow? Often. Frost’s character hasn’t dated well, yet still has forceful charm. Then the violence: gruesome in extracting guts, and joyfully absurd when needing a touch of kitschy playfulness. Shaun of the Dead’s method of achieving balance, to this day, is still distinct. 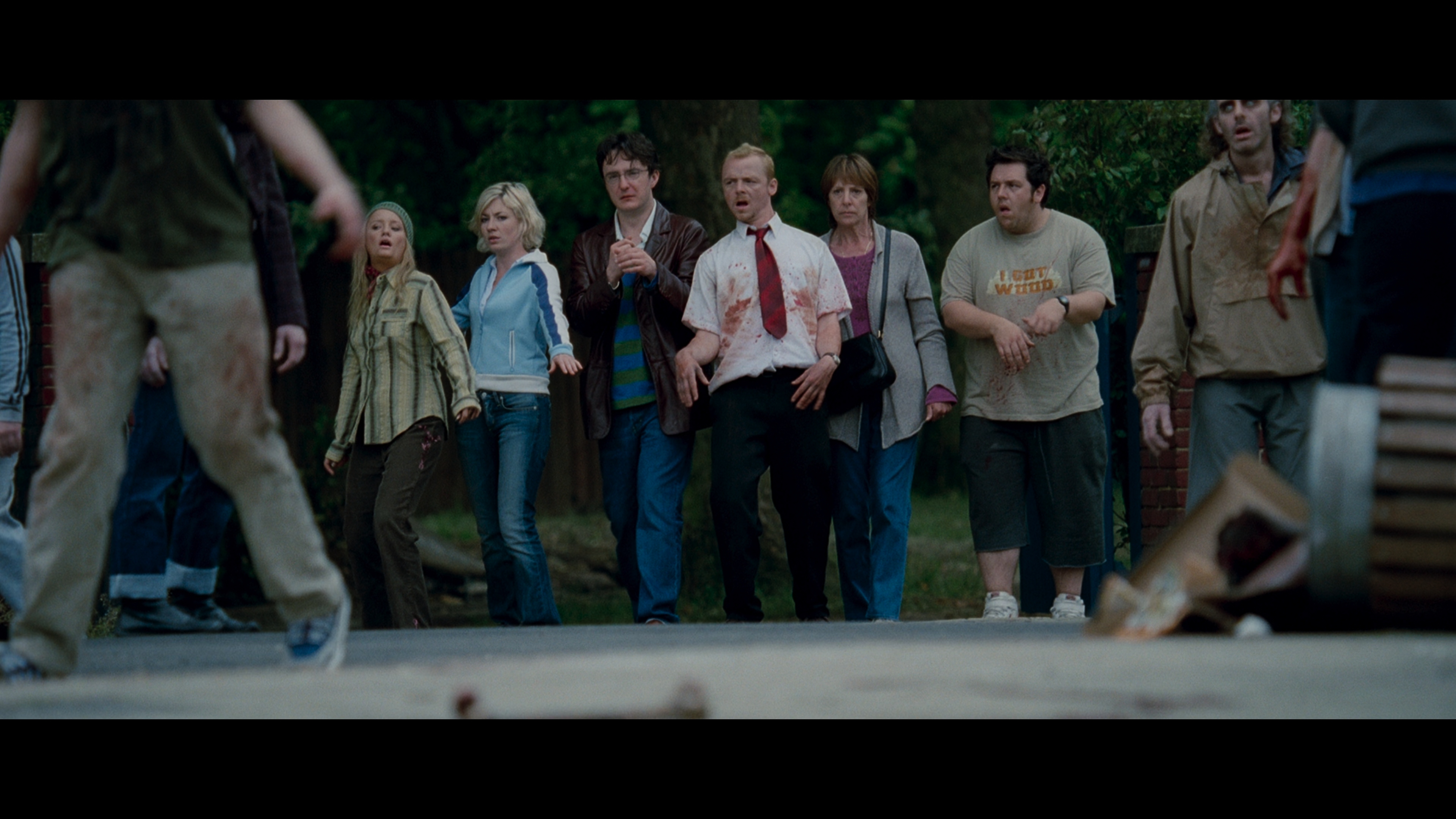 Once into the Winchester, Shaun of the Dead’s mid-tier but acceptable 4K presentation begins to fall apart. Earlier, there were signs. In the kitchen when Pegg first meets his mum, light edge enhancement shows – minor though. The grain looks heavier than it should too; that’s another ominous sign.

Then the bar brings clear sharpening, with heavier, unmistakable halos. Shadows not deep enough to hold back grain (although most are) buzz with a decidedly digital look. Marginal resolution brings a minor detail boost over Blu-ray, while facial definition lacks firmness in close. It’s… edgy. That’s the only suitable term that fits.

While the HDR pass amounts to significance in black levels (doubly so when the cast reaches the bar cellar), contrast doesn’t break out. Highlights subdue and soften. There’s nothing inherently wrong as this looks like Shaun of the Dead always did, with slight extension. Like with the mild deep color touch though, Universal doesn’t tweak things, and if anything, leaves too much the same in bringing this to 4K. Then, tries prettying things up with sharpening. That trick doesn’t work.

Brought into a new audio generation via DTS:X, the audio jump mirrors the video: the boost is a minor one. When Nick Frost slams into zombies and they roll over the roof, the sound travels through the heights, into the rears. Those overheads stay quiet for the rest.

Universal uses added surrounds for ambient effects (zombies clawing at windows), bullets passing through, and general tweaks to the action. Minor stuff, if satisfying. The front soundstage spreads wide however, key in placing even minor things like TVs off frame into a stereo. Bass accentuates soundtrack selections with heft, more than gunshots or anything else. Shaun of the Dead isn’t a gung-ho action story. What’s here works, if with minimal improvement.

Note that nothing is new on this release. Four (!) commentaries show up on both the UHD and Blu-ray. The rest is Blu-ray only, a feature rich series of (still annoying) U-Control pop-up features, a slew of deleted and extended footage, some EPKs, a slew of art galleries, and trailers. It’s as great as it ever was, if in need of a new content injection.

Shaun of the Dead

Still hilarious in sending up the zombie genre as much as having a ball with society, Shaun of the Dead holds up and is smarter than it gets credit for.