I Can Show You the (Same) World

In fairness, Jasmine (Naomi Scott) is given greater breadth of character. She stands up for herself, given a new song about not staying quiet and using her voice. The counter to that is Jasmine again spends most of the movie locked in a generic, fairy tale romance with no means of escape. Her lyrical empowerment doesn’t reinvent the character. Therein lies the flaw in Disney’s nostaglia-beholden process.

The animated adaptation ran a little over 80 minutes. Aladdin doesn’t need much, telling a parable about being ones self while learning money and power cannot define us. “The more you have, the more you want,” spouts Will Smith’s energetic (if creepily computerized) take on the lamp’s Genie. Full stop: that’s Aladdin’s greed lesson in one line (that sadly needs spoken in such obvious ways, but alas).

Of Disney’s current live version output, Aladdin is arguably the only artistically successful entry so far

Aladdin keeps going though. Some 90, painfully forced minutes remain. That’s filled with a litany of sloppy, romantic cliches as Aladdin bumbles each flirty opportunity. Jafar (Marwan Kenzari) expands as a villain on the opposite side. He’s an authoritarian, speaking of walls, borders, and being proudly disrespectful of women. That’s a contemporary touch too, even if this all leads to the same place.

Of Disney’s current live version output, Aladdin is arguably the only artistically successful entry so far. Yes, it’s still over indulgent with visual effects. By the time Iago transforms into a giant pterodactyl, the lack of restrictions in CG turns harmful to this fiasco. However, there is splendor here, especially through the lavish costume work; most of Aladdin exists as an explosion of color. Mixed with the music and dancing, that’s a hint of Bollywood entering this decidedly western studio production. Cool.

Credit the cast too who stay vigorous, capturing cartoon-like personalities. That’s all they can do, really. They trod through the same songs, same lines, and same arcs; how can an actor escape? Even Will Smith who brings his exuberance to this project appears hung up on Robin Williams’ iconic role. Aladdin becomes the corporate of all corporate products, strictly controlled, and lacking an ounce of director Guy Ritchie’s usual vitality.

But at least it’s not Dumbo. 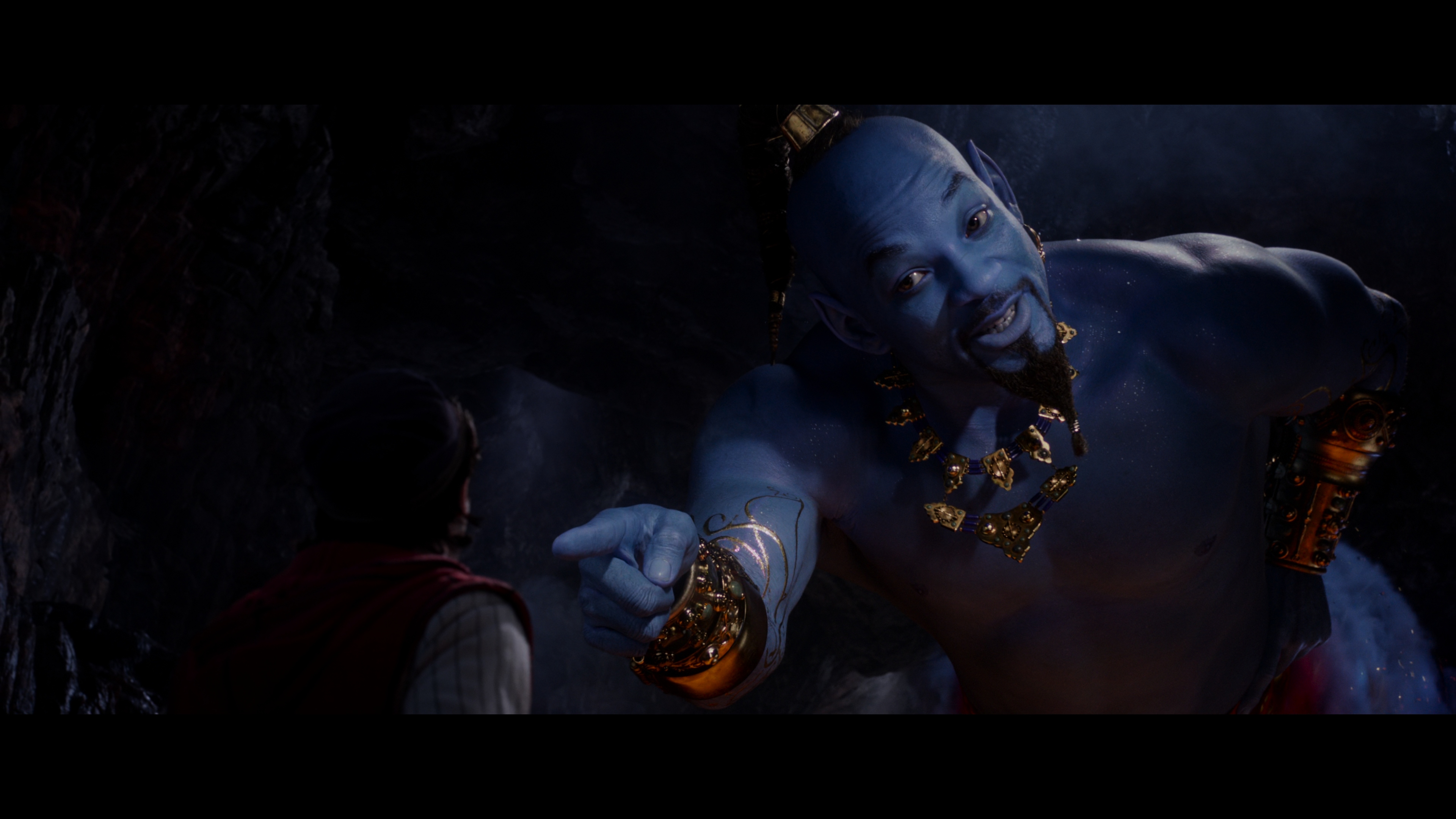 “Never Had a Friend” is the best part of this presentation. There, the HDR highlights come alive, rendering Genie’s magic with dazzling brightness. Other than brief fireworks, nothing else compares in terms of range. Scenes holding potential, like the Cave of Wonders (glimmering gold, molten lava) fail to generate suitable heat. Black levels create shadows that fall into pure black, as they should. That top end is listless though.

Listless is an all-encompassing term. Aladdin struggles to find visual energy, drawing most from the color. That looks spectacular, if lightly muted by the hazier sense of contrast. Costumes and the whole of Agrabah splash a variety of hues everywhere. Primaries douse the screen in splendor, adding zip to song numbers. The parade as Aladdin first announces himself as Prince leaves no palette selection unused.

Everything else? It’s fine. Aladdin comes from a 2K finish, running on the softer side with adequate detail. Long shots of castles or cities challenge the digital effects and they hold up to such scrutiny. The digital source runs clean with no noise evident.

It’s understandable to expect power from the cave collapse. Falling rock pillars and lava flow demand low-end support. Thanks to yet another crummy Disney Atmos mix, that never happens. Squished dynamic range is arguably worse than usual, listless in sending out bass, even with a volume boost. A few musical numbers bring decent beats, while action sounds sidelined.

Positional mixing excels when maneuvering Genie’s magic through the soundstage. For the finish, a windstorm bounces between fronts, rears, overheads, the best part of this track. Otherwise, heights rarely find use, and surrounds sit there waiting for an opportunity away from the soundtrack.

On the Blu-ray only, features begin with star Mena Massoud’s video diary. This runs 10-minutes and while edited to almost nothing, the on-set perspective still has value. Six deleted scenes and one deleted song follows. One featurette on Guy Ritchie, another on the Genie character, a brief blooper reel, and music videos bring things to a close. Disney put as much effort into these extras as they did revamping the Aladdin story.

Redundant, slow, and fizzling by the finish, Disney’s live action Aladdin never finds a groove or a new idea worthy of making this movie.