If ever asked to draw an image of a ‘60s era hippie living in late ‘80s New York, use James Woods’ character in True Believer. He plays a lawyer fighting against the surge of drug related cases during the Reagan era. On his office’s walls, pictures of him at Woodstock, another at a Civil Rights march. A pro-Union sticker adorns the door. He conducts most business with a joint in hand or nearby.

This New York is not a nice place. True Believer may cast Woods as an unlikely do-gooder, but the city projects the notoriety it earned during the decade; it’s rundown, dirty, and unkempt. Even Woods’ office is situated in a low-rent district, thinly held together by the last remodel (done sometime in the ’50s by the looks of it). New York has problems, but Woods believes the solutions are different than jail time.

True Believer isn’t the type to dodge cliché, rather running through them

Talented as he is, Woods looks exasperated or even out of place as a fast-talking, quippy defender of justice. Now, it’s co-star Robert Downey Jr. who takes these roles, although in 1989, Downey didn’t yet have the needed age. Still, Woods carries the story, concerning a wrongfully accused Korean man, imprisoned for eight years after a murder conviction. True Believer isn’t the type to dodge cliché, rather running through them, from intimidation to crooked DAs and crooked cops. All the while, the hero lawyer perseveres with his small, unlikely team, taking down the system – or “the man.”

That said, True Believer was a bit ahead of itself. While Woods defends even hardened cocaine dealers – for a quick buck because they pay in cash – it’s a film aware of how Nixon’s failed drug war impacted society, drawing even those innocents into the legal mess. So close to an era basically bathing in crack and heroin, the ideology was unlikely to connect. Now, the social quagmire caused by restrictive prohibition is clear, making True Believer kick more than it did on release.

The fault lies in how clearly drawn these characters are, from obvious villain Kurtwood Smith (flawlessly playing perpetual film lowlifes for most of the decade) to the wide-eyed good guys who, undoubtedly, will triumph. That leaves one possible outcome, meaning the meat of this story is in unraveling corruption. There’s enough doubt and enough evidence against Woods (and company) to make success seem impossible, unwound in the final 10 minutes via derivative gun stand-offs, followed by a verbal courtroom take down. Pedestrian stuff, lifted by the cast and an earnest theme. 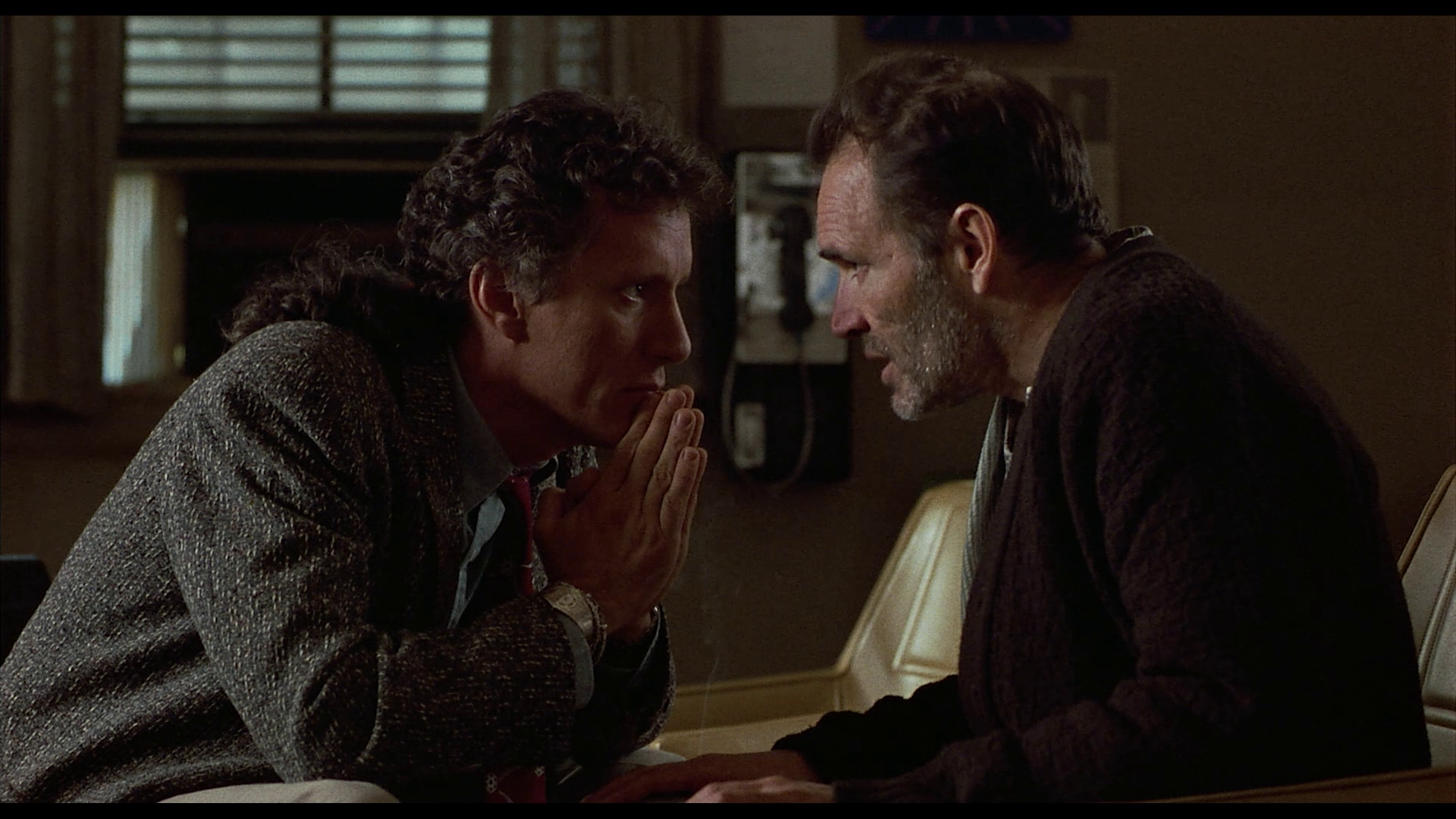 When the camera first appears, looking down at Yuji Okumoto, the facial detail suggests a winner. Then the shot draws up toward the ceiling and resolution slowly erodes. Further, more so. It’s actually a mess, where grain holds the appearance of being partly smothered by digital tools. In long shots, edges appear as a series of dots rather than lines. That’s what’s left of the grain structure, and some edge enhancement isn’t helping.

Damage and dirt intrude from the print. True Believer needs a decent cleaning and restoration. Flashbacks in black and white blow out contrast intentionally, but in doing so, make matters worse; grain elevates and specks seem drawn to these scenes.

It’s hard to fault the muted, mostly brown color palette – that’s the New York aesthetic. A few primaries might win a round or two, but it’s dry and muted for most of the runtime. Contrast falls to the warmer tint, while black levels reach enough depth to earn status as the best thing about Mill Creek’s Blu-ray.

Slight separation in the score marks the only instance of stereo use in this DTS-HD track. Consider this a mono mix. Pure saxophone sticks the landing with pure highs, a score that only exists in something from the 1980s.

Fine dialog reproduction loses no audibility due to age.

Nothing other than a nifty VHS slipcover.

James Woods is miscast and courtroom cliches run rampant, but True Believer succeeds by way of its forward-thinking storytelling.

The 15 unaltered images below represent the Blu-ray. For an additional 23 True Believer screenshots, early access to all screens (plus the 100,000+ already in our library), 100 exclusive 4K UHD reviews, and more, support us on Patreon.