That’s not right. This isn’t Men in Black II bad, rather so routine and draining as to never grapple with all that makes Men in Black a capable series. It’s more than tech (Men in Black: International offers a lot tech), more than aliens (lots of those too) and more than personalities (Chris Hemsworth and Tessa Thompson succeed as a pair). Rather, it’s a series that plays with the only efficient government agency in existence, one that day-to-day deals in theory, imagination, philosophy. Men in Black: International doesn’t seem to care about any of that.

For three movies, the series remained in New York. That never made much sense, even as the city’s Ellis Island history became intergalactic. Now the alien immigration spread to London, changing the flavor a bit, with some additional traveling to other locales. Yet the story is less galactic, more internal, as the possibility of rogue agents inside MIB clamp down on the sprawling potential still left in this franchise. And, there’s little mystery as to who the perpetrator is.

Hemsworth effectively plays Thor, minus the physical muscle; that’s traded in for chromed gunfire. He’s a dolt, veering from any chance of intellectual stimulation. Thompson’s enjoyable in the same way, if let down by listless script. The concept of Thompson’s character (carrying a lifelong fascination with aliens after a childhood experience) suggests a chipper, and over eager new recruit. Instead, she falls in line without any gaffes, never challenged or used for comic wit. Like the movie, she’s there; the series formula demands buddy material as much as it does sequels.

Also, it’s fair to consider the lack of practicality on display. Rick Baker’s retirement means a litany of dull, soulless digital creatures. No offense intended for the CG work which ranks as the series best, yet the lack of ingenuity to imbue Men in Black: International with real world puppets or animatronics robs the series of its heart.

Empathy. That’s what’s missing. Take away the physical, and the critters blend into a menagerie of contemporary blockbusters. It’s expected they’ll explode or be killed, because that’s the Hollywood way. In the final act, Hemsworth and Thompson realize their mistake. The immigrating villains they chased down were not villains at all, only trying to defend themselves from something worse. That worse was the government, which in a better movie, might stand out as current commentary. Instead, there’s noise. Explosions. A few quips and one-liners. Sameness. Men in Black: International just is. 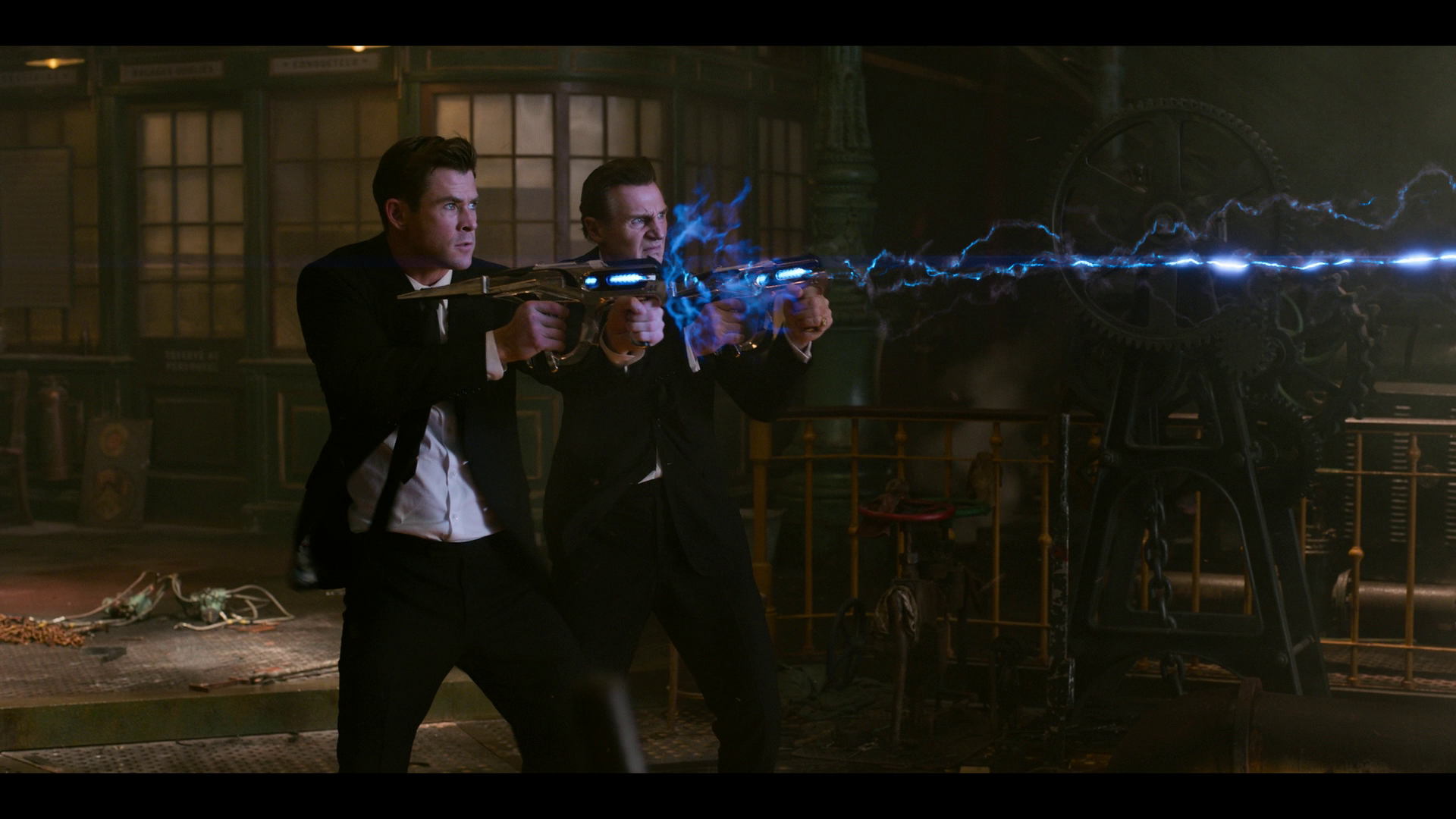 Exceptional digital clarity sticks out from this 2K source. With a singular exception, every shot offers noise-less imagery, pure and unmistakably digital. This allows detail to flourish, spunky in close with some dazzling worldwide scenery. Even in the desert, sand grains look resolved. A few city shots look pulled from Sony’s stock vault, but otherwise push rich sharpness.

As with the prior Men in Black 4K releases, HDR helps when pumping in brightness from MIB weapons or tech. Even light reflecting from chrome adds a beautiful, bright sheen against the heavy black levels. While shadows calm down in places by design, that allows other elements of the frame to stand out. Certainly, the black suits lose no detail against night.

Making full use of its Atmos soundstage, Men in Black: International rarely slows down. Wildly fun action design sends lasers streaming between channels, and some vicious bass as aliens uproot a street. A bike chase pans around the soundstage with low-end support added during those passes to represent the engines. Where possible, height channels pick up activity while adding subtle touches like sand falling.

There’s a particularly grand moment where lights begin popping in a room, doing so in each speaker with such realism, it’s as if the speakers themselves started crumbling from a power surge. For less subtly, Men in Black: International provides wormholes and a super subway, with awesome punch from the sub and winding positional work. This mix matches up to the major studio budget.

Sony seems as disinterested in this sequel as audiences did, at least going by the non-effort of these bonuses. A gag reel carries a few laughs and nine deleted scenes were never completed, showing how the effects were handled on set. Derivative two or three minute featurettes on the cast, effects, locations, the villains, and stunts cover the basics in EPK style. A recap of previous films is hosted by Frank the Pug, and he’s also in a short faux-commentary. Note both of those individually offer more screen time for Frank than the movie itself. Finally, there’s an NBA tie-in promo.

More gadgets, more aliens, more locations, but Men in Black: International never finds a voice or a place with this series best qualities.

The 15 unaltered images below represent the Blu-ray. For an additional 27 Men in Black: International screenshots, early access to all screens (plus the 100,000+ already in our library), 75+ exclusive 4K UHD reviews, and more, support us on Patreon.

The following six screen shots serve as samples for our Patreon-exclusive set of 42 full 4K screen shots grabbed directly from the UHD: