Never Get Out of the Boat

When Martin Sheen and his troops approach a bridge midway through Apocalypse Now, it looks like a Halloween theme park. Fireworks of war add tense heat. Lights strung between sides look decorative and out of place. On the shore, a twisting, maze-like trench. In those confines sit soldiers turned to nothing by violence, Vietnam’s zombies. One of them speaks no words. By muscle memory, he draws his grenade launcher, fires a round, and kills an unseen Vietnamese enemy. No reaction. No empathy.

Few characters in Apocalypse Now pay heed to authority. It’s little wonder why. Robert Duvall’s arrogant, blistering Lieutenant cares more the for the surf than those around him. In this way, Apocalypse Now draws the entirety of American involvement in Vietnam. Duvall represents the beginning, with the US perceived as unbeaten and invulnerable. He stands in live fire and drops napalm by pointing his fingers. That’s power, driven by money, but a superior force incapable of victory because of chaos.

Martin Sheen becomes the eyes of this war. On a classified mission, the troops with him prove careless and hopelessly immature; one isn’t even 18 yet. Traveling a river on a mission they cannot understand – only Sheen knows the target – they go along, equally unassuming that death is inevitable. They carry Duvall’s spirit. Patriotic flames will protect them. Their on-board machine guns cannot be beat by perceived savages, until one is killed by a spear thrown from off shore.

Something so harrowing and truthful as Apocalypse Now is too uncommon

Eventually they reach the Halloween nightmare. Soldiers fight for this bridge under no command. They have no plan; they just shoot. That’s Vietnam’s center, where national ego is obliterated and the toll on those still living pushes troops toward shock. Still later, Sheen’s utter disintegration into mental nothing, no different than the soldier earlier who blankly fired grenades, or Marlon Brando whose rogue Colonel was the target. The war’s quagmire turned optimism to an impossibility, and people into primal animals.

“You are fighting for the biggest nothing in history,” shouts a Frenchman to Sheen, encapsulating public dissent toward the decision to enter combat. It’s a stellar line, coming from the outsider perspective who realizes before anyone else how fruitless this conflict is for the US.

Apocalypse Now is the rare western war film to perceive things with anger and hostility. The ballet of helicopters nearing a village is intercut with school children running as Ride of the Valkyries blares loud enough to soften the sound of rotors. It’s madness, disorganized at best, and against an utterly dehumanized foe. The greatest feat of Apocalypse Now – in using the framework of Heart of Darkness – is turning the hero into the enemy. In the opening scene, Sheen punches and shatters a mirror, unwilling to accept in a moment of drunkenness he’s not a hero. By the end, Apocalypse Now reflects the barbaric truth.

No wonder that after Apocalypse Now, Hollywood began of string of Vietnam stories about America winning, the likes of Rambo: First Blood Part II and others. Movies prefer the fantasy. It’s what they excel at. Something so harrowing and truthful as Apocalypse Now is too uncommon. 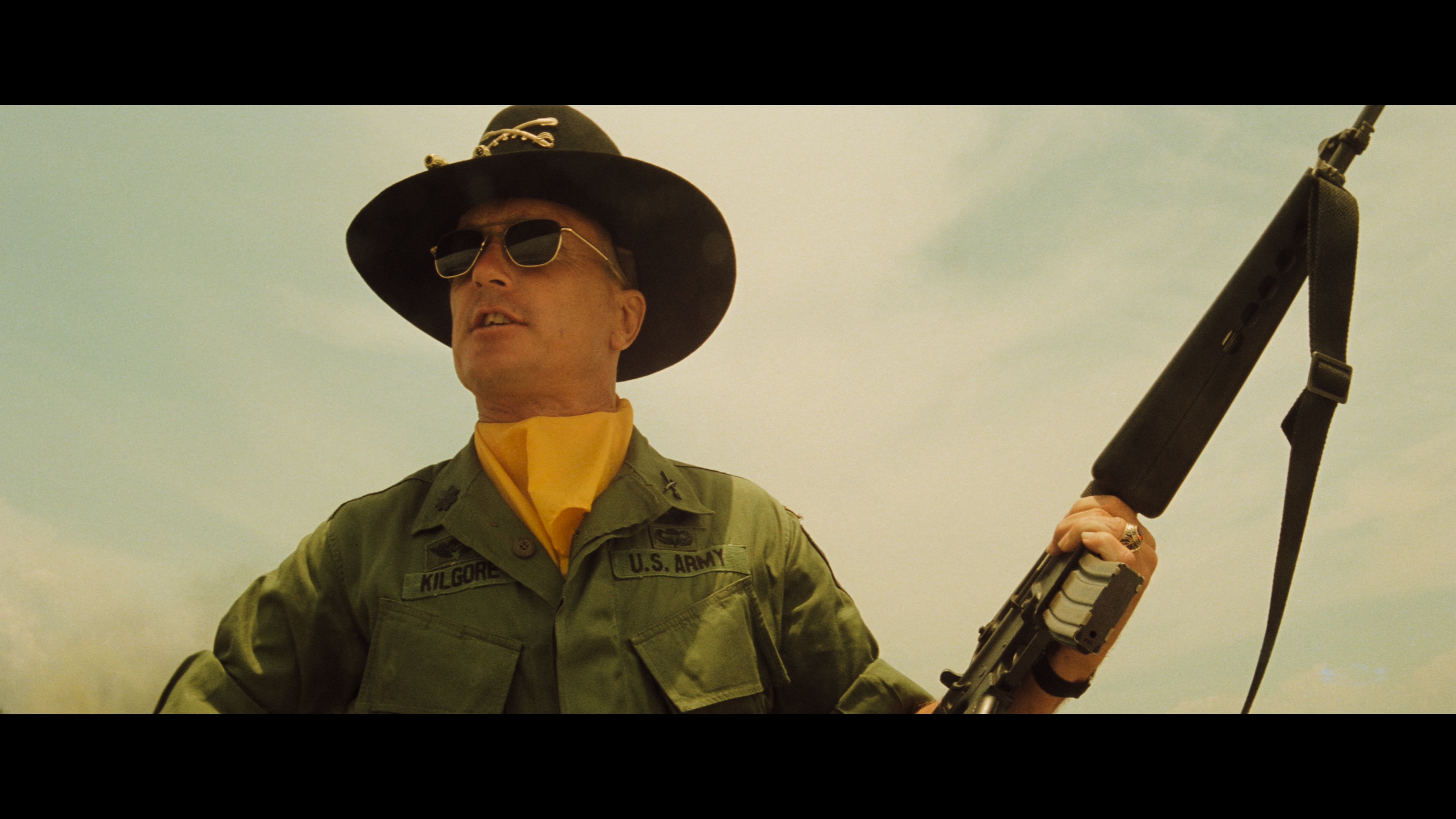 If there’s ever confusion as to what HDR (Dolby Vision in this case) does for a vintage movie, watch Apocalypse Now’s final act. Or, Brando’s scenes. Covered by shadow, the depth awarded to this new 40th anniversary presentation brings out nuance in the dark. He’s still coated by pure black where intended, yet visible deeper into the frame than before. His eyes hang there, eerie and cold.

Note the differences elsewhere too, especially with fire that takes on a dazzling brightness. At night, shoreline flames or lights push intensity. The Playmate show uses stadium-like bulbs and their vividness appears utterly natural with this pass. The same goes for the bridge with those light strands and flares jumping from the rich darkness behind them.

Sharpness comes and goes, more representative of the harrowing shoot than this contemporary transfer. Most of Apocalypse Now creates detail in droves, hauling out visible textures in the jungle environments, even when viewed from distant shorelines. With little surprise then, close-ups of heated, sweaty faces pulls definition to its peak. Lionsgate gives the new Final Cut its own disc, allowing source grain to remain in control even when challenged by smoke or haze. Every bit of this looks like film.

The significant change comes with color timing, clearly driven by modern grading techniques to create a decidedly digital orange/blue dynamic between day/night scenes. Warmth is imbued with a heavy orange glaze, and it’s laid on thick, unlike any previous releases. It’s possible to notice the change during the dinner with the French. Once only Sheen and Aurore Clement remain at the table, saturation takes a downturn, creating organic, pure flesh tones for the first time.

This said, Coppola himself supervised and approved these tweaks. It’s his film. With that understood, Apocalypse Now produces a worthy new 4K edition for this anniversary.

Brought into 2019 via Dolby Atmos, this longtime home theater demo film loses little with this modern mix. Bass ranks on the lighter side, picking up punch where needed (the napalm), if sustained at medium volume as to not overtake dynamic range. Expecting booming blockbuster sound from Apocalypse Now means aiming for disappointment, while anticipating a natural (even subtle) balanced soundstage puts things in better perspective.

The real boost comes from the surround mix, enveloping to the extreme with extensive use of the overheads to keep helicopters flying around. With the boat hidden and Duvall’s team on the hunt for a surfboard, a search chopper comes in from the left, hovers in the heights, then takes off into the right rear. Marvelous stuff. So is rain, dropping in full, catching each speaker with thunder clapping above.

One of the reasons for Apocalypse Now’s standing in the community is the sheer amount of sound. First landing on the beach, small brushes with combat happen everywhere, with dialog almost pushed out of the mix. But, it’s cautious, in proper balance considering the mayhem, with no lines lost under the gunfire. Likewise, the score and soundtrack bounce between speakers, the right level of disorientation presented.

On the Final Cut disc, Francis Ford Coppola provides a four minute intro, explaining his reasons for creating this version. Coppola offers a commentary for the Apocalypse Now Redux edition.

The rest resides on a separate bonus Blu-ray. That includes the essential Hearts of Darkness documentary, 90-minutes long, with an additional Coppola commentary tagging along. A Q&A with Coppola and Steven Sodernergh from the 2019 Tribeca Film Festival runs 47-minutes. Some 21-minutes of Super 8 footage shot by the sound designer presents a dazzling look behind-the-scenes even without sound. It looks gorgeous too. Dutch Angle follows a photographer’s journey through the filming, showcasing revealing stills taken during production. It’s another stellar piece, running 31-minutes.

A three-minute look at the restoration gives Dolby credit for their work, with a little (very little) insight the technical involvement. Up next, A Forty Year Journey that compares each home release, from VHS to now. The original sound designers have their say in a four-minute look. Some images of a script excerpt begin a series of galleries, including storyboards and marketing.

The following six screen shots serve as samples for our Patreon-exclusive set of 59 full 4K screen shots grabbed directly from the UHD: