Season Seven of Arrow brings a huge change to the status quo of the venerable CW show. Oliver Queen’s risky decision to turn himself over to the FBI and reveal himself as the Green Arrow to the public has consequences for Team Arrow and Star City. It’s a deviation from Arrow’s established formula that doesn’t always pay off as the series winds down. Season seven is a mixed bag with the occasional highlight. It generally lacks the episode-to-episode intensity and fun surprises seen in Arrow’s best years.

Oliver (series star Stephen Amell) opens the season in prison while his former comrades are left behind to protect Star City. Expect more of Ricardo Diaz as a recurring villain during this ragged season with new showrunners and flash forwards taking place twenty years in the future. There’s still plenty of action and a plethora of recurring villains, but expect fewer costumed heroes outside of the annual crossover event. Dinah and Curtis have given up playing superhero in season seven for more respectable jobs.

If you enjoyed how Arrow unfolded last season, season seven follows right in line. If you remember Arrow from its earlier glory days and feel the show has drastically fallen off, nothing shown this season will change your mind.

The biggest new addition to the show is actress Katherine McNamara, former star of Shadowhunters. Before joining the Arrowverse, the red-headed McNamara had been pegged by fans as a logical suggestion to play Batgirl. That doesn’t happen unfortunately. McNamara is instead cast as Oliver and Felicity’s daughter Mia in a recurring flash forward set in a dystopian future, one in which Oliver is dead and Felicity is missing. Despite thinking in advance that Katherine McNamara would make a great addition, her character is turned into a largely unlikable protagonist as a rebellious youth. The flash-forwards are often forgettable and meandering as Oliver’s kids chase their tails.

It should be mentioned that Katie Cassidy really brings it in season seven playing the now-reformed Black Siren, impersonating her doppelganger Laurel Lance in Star City. Arrow’s show-runners probably shouldn’t have killed off Laurel in the first place, but they’ve rectified that mistake by bringing Cassidy back as a regular. Some of Arrow’s cast are phoning it in these days, but Cassidy still brings a heat to her scenes often missing in other characters. Her arc as reformed villain is a real highlight of this season.

Having lost Arrow’s original showrunners after season six, season seven under producers Beth Schwartz (DC’s Legends of Tomorrow) and Sarah Schechter feels like more of an ensemble approach similar to DC’s Legends of Tomorrow. Oliver’s prison story arc lasts several episodes, largely separating his adventures in prison from what’s happening outside to the rest of the cast in Star City. While in prison, a mysterious new Green Arrow begins appearing around Star City unknown to Team Arrow. We soon learn the new Green Arrow has a personal connection to Oliver’s father.

The big event everyone will focus on in season seven is the now annual Arrowverse crossover event. This year’s crossover, “Elseworlds,” introduces Gotham’s own Batwoman to the Arrowverse and paves the way for her new series premiering this year. The crossover involves cast from Arrow, The Flash and Supergirl crossing dimensions, starting off with Barry and Oliver switching bodies. Superman and Lois Lane also make guest appearances. It’s the expected highlight by now of each Arrowverse broadcast season and mostly delivers with comic book goodness. Some would recommend skipping most of the season only to see Elseworlds.

Most shows have their formula down pat by season seven and Arrow isn’t an exception. The plotting runs on auto-pilot these days and relies on a heavy dose of repetitive superhero melodrama to fill a season that runs over twenty episodes. Filler is almost inevitable with the type of grinding schedule demanded by network television.

When the news hit that this was Emily Bett Rickards’ last on the show, fans had mixed feelings. It’s not a great send-off for Felicity but many had felt that her character had dragged the show down a path that wasn’t healthy for Arrow. The show only has an abbreviated season eight remaining before the end and rumors indicate it will revolve almost entirely around the coming Crisis crossover. Long-time fans hope it’s a fitting send-off to a once-great series. 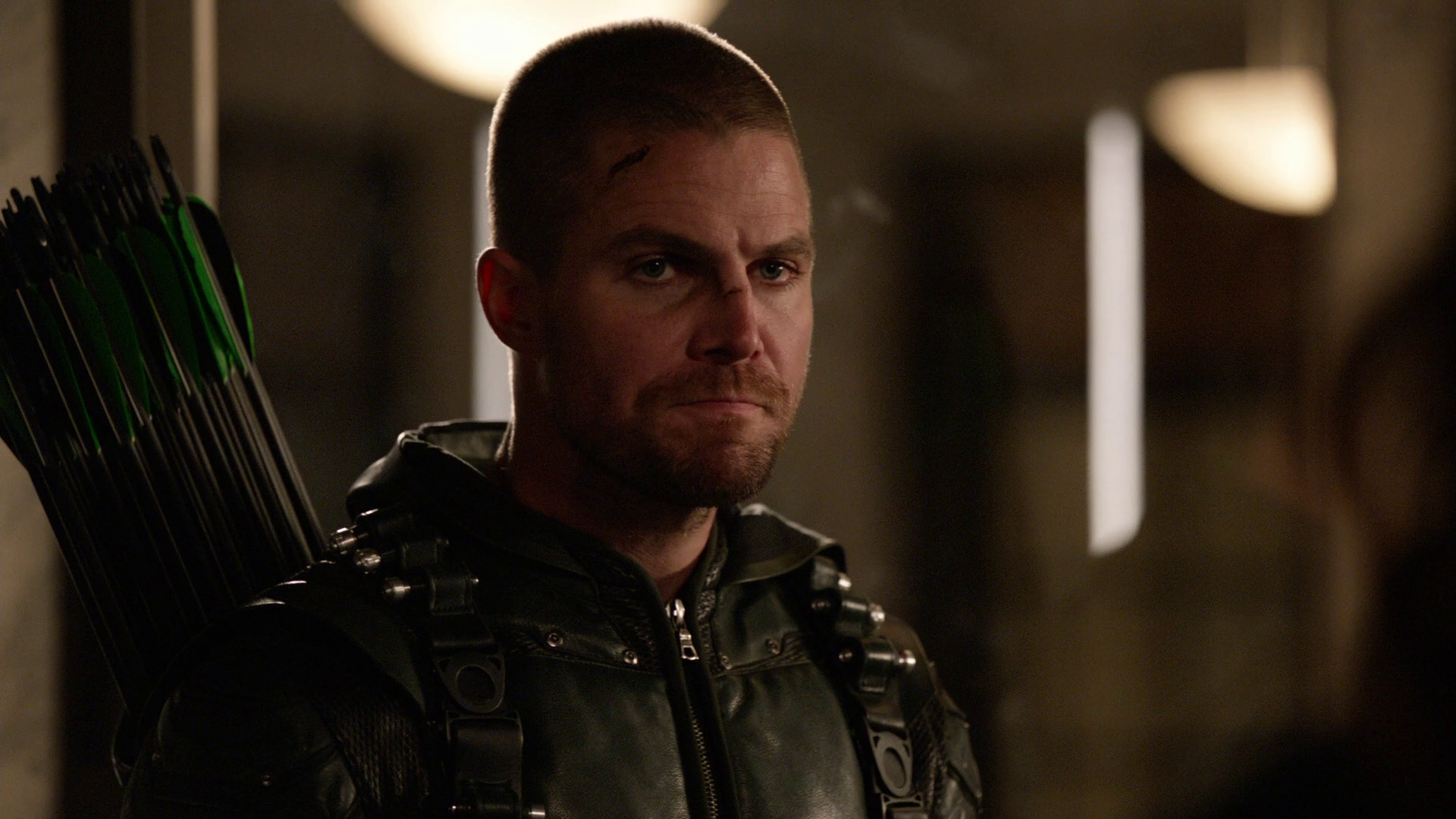 Arrow as a series has always had a heavily graded visual appearance. This season ups that ante with stridently teal-green flash-forward scenes, making Star City’s present almost warm and wholesome by comparison. Exteriors pop with more vibrant color and definition than the darker interiors.

Arrow has improved its shadow delineation and highlight details over the years. The 1080P video of prior seasons often had scenes with murky shadow detail and crushed black levels. That problem is more or less licked with a consistent contrast and improved clarity.

Warner brings the season to Blu-ray in a four-disc set with four BD-50s holding 24 episodes in total. The serviceable AVC encode holds up surprisingly well given the occasionally suspect bitrates. They’ve definitely improved their encoders over the past few years. This is generally decent definition in sharp quality, if lacking in the finest detail possible. The 1080P presentation is clearly superior to Arrow’s HD broadcast on the CW.

Arrow’s explosive action stunts have always lent themselves to discrete audio and strong LFE. The 5.1 DTS-HD MA soundtrack has an aggressive mix for television with excellent channel separation and engaging surround moments. It has involving, high-impact surround activity. Dialogue is crystal-clear and cleanly delivered.

Arrow’s seventh season takes form on Blu-ray in much the same shape as prior Blu-ray sets from the series. The four-disc Blu-ray set packages together all 22 season seven episodes and the two bonus Elseworlds crossover episodes from Flash and Supergirl. Unlike previous seasons, DC’s Legends of Tomorrow was left out of the Elseworlds’ crossover event.

The set arrives in a slipcase and includes a digital copy that only redeems on VUDU in HDX. A one-page episode guide insert comes inside the case.

Beyond the various deleted scenes and a hilarious gag reel, the longer supplements are clearly designed to be shared between other Arrowverse Blu-ray releases and don’t necessarily focus on Arrow per se. If you are buying any of the other Arrowverse sets, expect some duplication in the extras.

Villains: Modes of Persuasion (38:05 in HD) – A look at various villains from DC Comics in a variety of mediums. Villains like Lex Luthor, Deathstroke, the Penguin, Brainiac, the Joker and more are discussed by television producers and even a psychologist. Malcolm Merlyn and Deathstroke are the two Arrow villains to receive coverage in this far-ranging documentary that delves into what makes them tick as characters. This is a well put-together featurette that makes interesting points about the nature of villainy.

Inside the Crossover: Elseworlds (45:01 in HD) – This extended featurette consists of a panel moderated by Hector Navarro featuring various Flash, Supergirl and Arrow producers. They discuss the mechanics and challenges of pulling off the huge crossover event, introducing Batwoman into the Arrowverse, planning for the next crossover and other topics, including a brief conversation about the introduction of real world (read politics) issues into their shows. This is little more than a perfunctory discussion that barely touches upon anything interesting or substantial. Everyone involved looks a little awkward and hesitant to discuss issues or possible problems. A segment of clips featuring other DC professionals like Bruce Timm and Mike Carlin discuss the concept of Elseworlds prior to this crossover.

Gag Reel (04:41 in HD) – A tightly edited compendium of gaffs and R-rated moments on Arrow’s set and behind the scenes. Having reviewed many Blu-ray sets, this is one of the funniest and most entertaining gag reels I’ve ever seen.

The Best of DC TV’s Comic-Con Panel San Diego 2018 (60:59 in HD) – I liked it better when WB would include the entire panel for each show. What we get here is an edited compilation of the Comic-Con panels for Supergirl, Arrow, Black Lightning, The Flash, and DC’s Legends of Tomorrow.

Deleted Scenes (All in HD) – Each disc has its own list of deleted scenes which aren’t playable within their associated episodes. There’s nothing of huge interest for fans but it’s always a nice bonus.

Disc 2 – One deleted scene (00:53 in HD) A throwaway scene from the Elseworlds crossover.

Arrow has seen better days but fans will still eagerly enjoy the annual crossover with other superheroes.

The 15 unaltered images below represent the Blu-ray. For an additional 13 Arrow: Season Seven screenshots, early access to all screens (plus the 100,000+ already in our library), 75+ exclusive 4K UHD reviews, and more, support us on Patreon.