Over the past decade, Marvel brought audiences toward this melee, beginning in Iron Man’s militaristic fantasy before turning into a wild, uncontrolled spectacle of comic book fiction. Avengers: Endgame is ludicrous and ludicrously entertaining, a blast of color and sci-fi ideas without restraint. It’s also emotional, coming from a place where no one is safe, even the strongest heroes in Marvel’s lore.

Read our full review of Avengers: Endgame for more.

Those expecting a masterful 4K showcase set themselves up for disappointment. Avengers: Endgame isn’t made for that. It’s a dim, mournful movie, and as such holds contrast back. Black levels show their best, and occasional light sources – like lasers or explosions – love pushing extremes. When Captain Marvel first appears to Tony Stark in space, it’s blinding. Mostly though, this is a movie enamored with an overcast look, muted and gray with limited punch. Consider Tokyo’s neon, set against night; the output is fair at best. That’s fine. Avengers: Endgame looks, in this regard, as intended.

From a 2K source, detail isn’t a splendor either. Some shots blossom, and picking out detail on the time travel suits or facial detail in close proves impressive if inconsistent. Whether due to the source or Disney’s encode (somewhat pinched at 66GB for a three hour runtime), medium shots lack precision. For whatever reason, Chris Evans is the prominent victim, appearing plastic as if run through a filter for a majority of his screen time.

Maybe that’s the cost of the overall clarity. Avengers: Endgame doesn’t produce any digital noise, giving things an expensive, blockbuster-type sheen. A touch artificial, but clean. Given the loss of fidelity at times, some noise reduction becomes increasingly plausible.

What definitely falls on Disney – and that squished encode space – is the banding. Watch late as Thor and Valkyrie discuss their future; the skyline becomes littered with blocks and artifacts. Other scenes create equal problems, to a lesser extent. A few lighter shadows show too much of the compression process too. This borderline 4K presentation (and notably without IMAX footage) succeeds in matching the intended style, if little else. 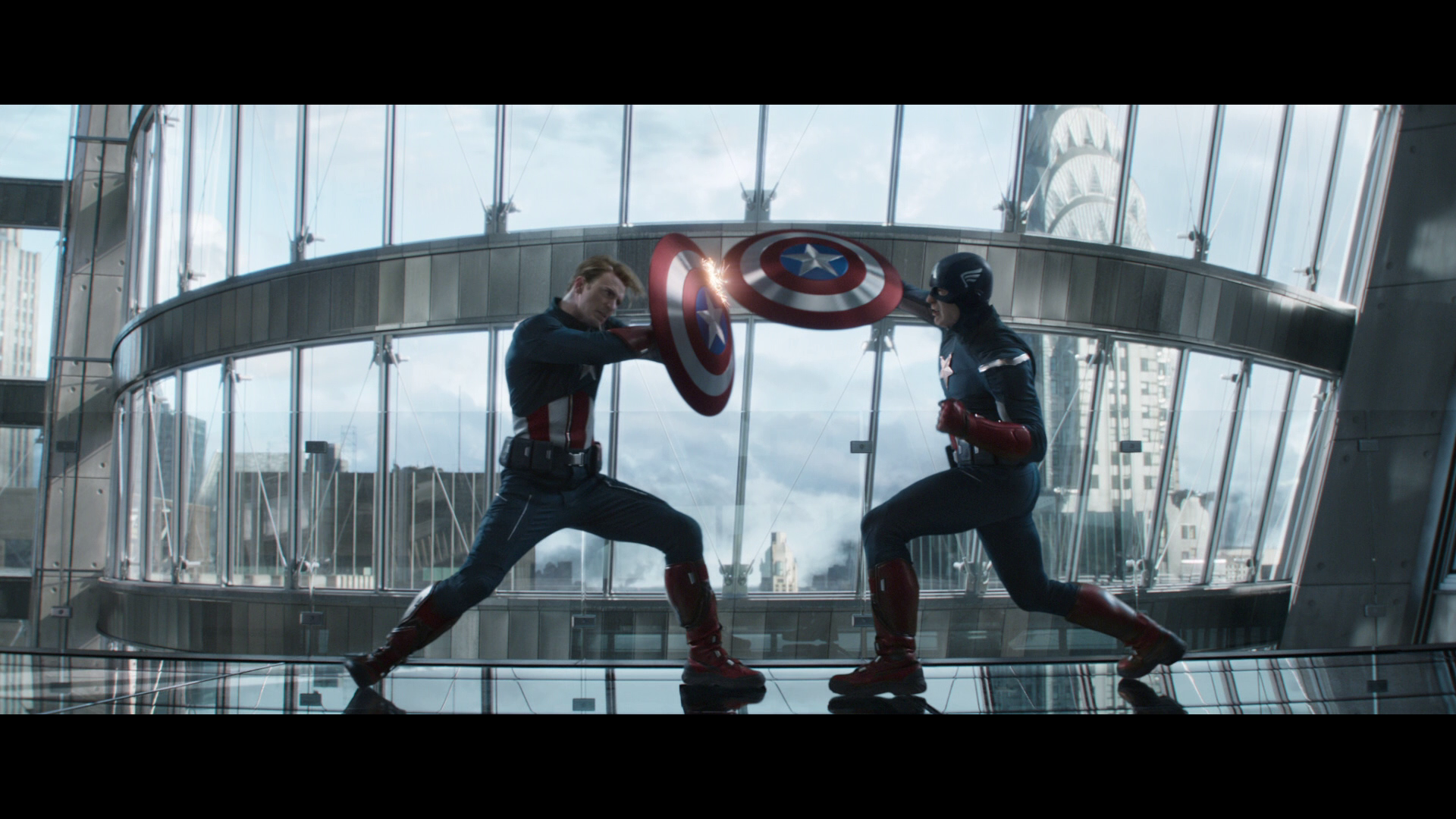 Again, Avengers: Endgame is the same Disney audio narrative, squeezing by with thin dynamic range. The power reduction will generate a rumble when Thor’s hammer slams into his hand or a spaceship enters the scene, yet compared to other productions of this scale, the weakened output places Avengers: Endgame barely above average.

Given the number of flying… everythings within the action scenes, rear speakers marginally capture the scope. Oddly, ambiance in the opening moments and in Tokyo’s rain stick out. The same for dives into the quantum realm. When scale includes two universe-sized forces clashing, separation weakens. Minimal directionality filters into this mix.

Directors The Russo Brothers join their writing duo Stephen McFeely and Christopher Markus for a commentary on the Blu-ray only.

On a bonus disc, there’s little worth digging into. The best is a tribute to Stan Lee. That runs seven minutes. Thor, Captain America, Iron Man, and Black Widow earn individual, fairly empty featurettes on their character arcs. A short five minute look at the women of Marvel Universe follows, and after that, the Russo Brothers work is praised in another short featurette. A gag reel and deleted scenes close things out. Bleh.

The 15 unaltered images below represent the Blu-ray. For an additional 56 Avengers: Endgame screenshots, early access to all screens (plus the 100,000+ already in our library), 75+ exclusive 4K UHD reviews, and more, support us on Patreon.

The following six screen shots serve as samples for our Patreon-exclusive set of 64 full 4K screen shots grabbed directly from the UHD: