Doling Out Punishment to the Man

White Line Fever holds the unique distinction of being the only pro-trucker soap opera in all of cinema. Take pro wrestling out of the ring, add some big rigs and white collar economic anxiety, and poof – out pops White Line Fever.

Jan Michael Vincent stars as Carrol Jo Hummer, spending a chunk of the movie serenaded by honky tonk jams and worrying for his defenseless wife who has to consider abortion because of financial troubles. White Line Fever doesn’t branch out in demographics; it’s a trucker action flick for truckers.

There’s a bit of Americana in here. Hummer buys his own truck, stays on the right side of law, and travels the west. In the end, White Line Fever turns an evil eye toward corporate profit-driven motives on the little guy. Hummer, the hero, is willing to point his shotgun at the establishment. Winning means violence and fighting for right, leading to a slew of brawls with a touch of old-fashioned Hollywood cowboy punches.

A preposterous, dopey movie, but White Line Fever knew how to reach the necessary audience

The script takes shots at the younger generation’s lacking work ethic, and cheaply snipes a black man’s urge to reject the way things are; it’s a story of white men doling out punishment to one another. White Line Fever reaches absurd extremes and casts most characters as bland good/evil caricatures. Simplicity wins, less this truck drivin’ romp get too complicated on the issues.

In the mix of hokey tropes and daytime TV romance, White Line Fever sprouts a story of working together. In-between, a sense of America’s Union days that happened decades before this movie. Worker’s fought for rights with violence. This movie capitalizes on that ideal. In his last, symbolic defiant act, Hummer stares down corrupt law on corporate payroll and smashes his privately owned big rig through a logo. Only then do people stand with him.

Using the open road for much of the runtime, the third act begins to close down. Scenes of board rooms with expensive desks and flustered secretaries replace those of Hummer in his driver’s seat. The difference is key – those elitist snobs playing golf, goofing off in their corner offices don’t measure up to the will of small time entrepreneurs.

By 1975, wealth inequality started to impact the middle class. White Line Fever is an early example, with the working wife sweating in a factory, the husband seeking any paying gig, but it’s still not enough to raise a family. A preposterous, dopey movie, but White Line Fever knew how to reach the necessary audience, and it’s not without truth. 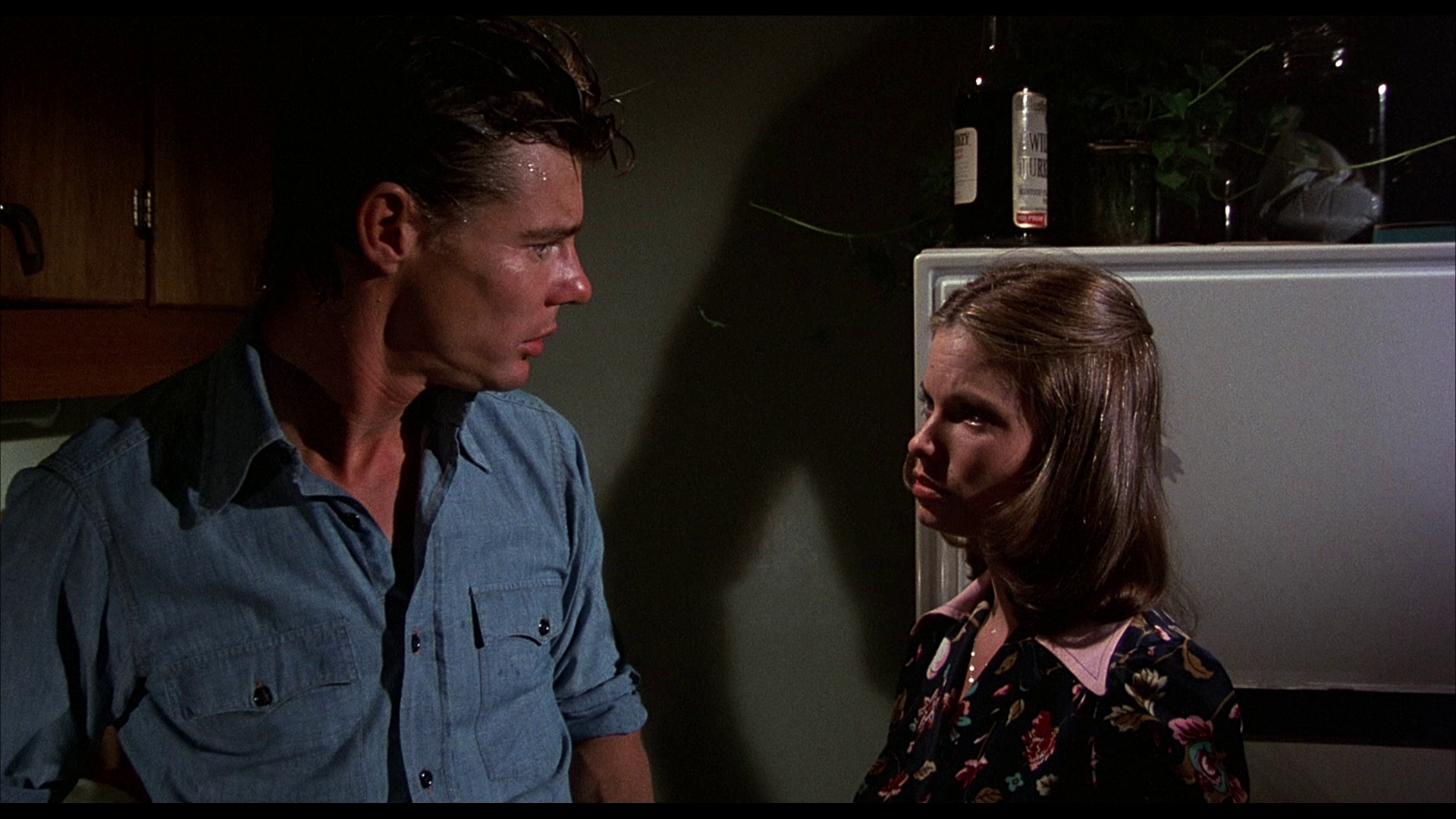 White Line Fever’s HD disc creates some grand color too. Stout primaries deliver the blue of Hummer’s truck, some outstanding greenery, and near bleeding reds. Bright, but not over zealous as to rob White Line Fever of stability.

It’s an older print, a little dusty in spots but holds up. No evidence of deep scratches show, and gate weave is managed.

While one explosion becomes a touch too bright and challenges treble, the rest of this DTS-HD mono track creates a pure, organic audio mix. A pure country soundtrack produces smooth low-end with sharp lyrics.

Crisp dialog holds age, no more than is expected for this period.

Nothing. That matches the VHS throwback slipcover at least.

The 15 unaltered images below represent the Blu-ray. For an additional 17 White Line Fever screenshots, early access to all screens (plus the 100,000+ already in our library), 75+ exclusive 4K UHD reviews, and more, support us on Patreon.