It’s an interesting take on the comic book hero, portrayed here as someone seeking freedom in a country denying him that choice. Fitted with leftover ‘60s era nuclear paranoia – including multiple mushroom clouds – Hulk projects an American ideal, from a side preferring limited government. It’s also fearful and crude, with military bearing down on the gamma-irradiated monster, or trying to keep him in confinement. Anything to erode his rights.

Was Lee’s take a truly subversive comic book movie, Hulk wouldn’t star Eric Bana. A black actor, maybe, someone to unravel the ideology from the discriminated perspective. Maybe the timing wasn’t right – Hulk’s post-9/11 2003 release brought into question excessive military force, a rather daring stance at a time when the country was endeared to the idea of combat. It’s a movie aimed to tone down vengeful attitudes, while still suggesting conspiracy ideology. It’s confused.

Bana’s fine in the role of Bruce Banner, rightfully serious and struggling with a lost past. It’s a suitable story anchor, told through an obnoxious comic book-edited haze that’s more distracting than attractive. Hulk wants to turn cinema into another art form, and collapses in on itself via choppy cutting and repetitive split-screens.

Hulk can’t decide whether to push forward and explore comic media in an adult, thematic way or play to the goofier wild side. It’s stuck between Tim Burton’s plain but beautiful Batman and Christopher Nolan’s The Dark Knight’s real world employ. Neither side wins in Hulk, with a saturated, day-glow green mutant hammering a squad of tanks, set between a deep, dramatic father/son conflict.

Nick Nolte spends much of Hulk under shadow as Banner’s dad, hiding from the government that confined him. In his breakout moment, he rants, screaming and waving madly. Again, consider the post-9/11 release when listening to Nolte’s outrage. “Think of all the harm they’ve done,” he screams regarding the US government. “And know this, that we can make them, and their flags and their anthems and their governments disappear,” the final bit a grueling shot at a time of high patriotism.

It’s unusually brash and forthright for a Lee film. The Taiwanese-born director typically appreciates somber cultural stories. There’s something to Hulk that feels like an outburst of anger from Lee – an appropriate venue – turning the work personal, if still contained by big budget, major studio norms. Control stretches to the arts too. 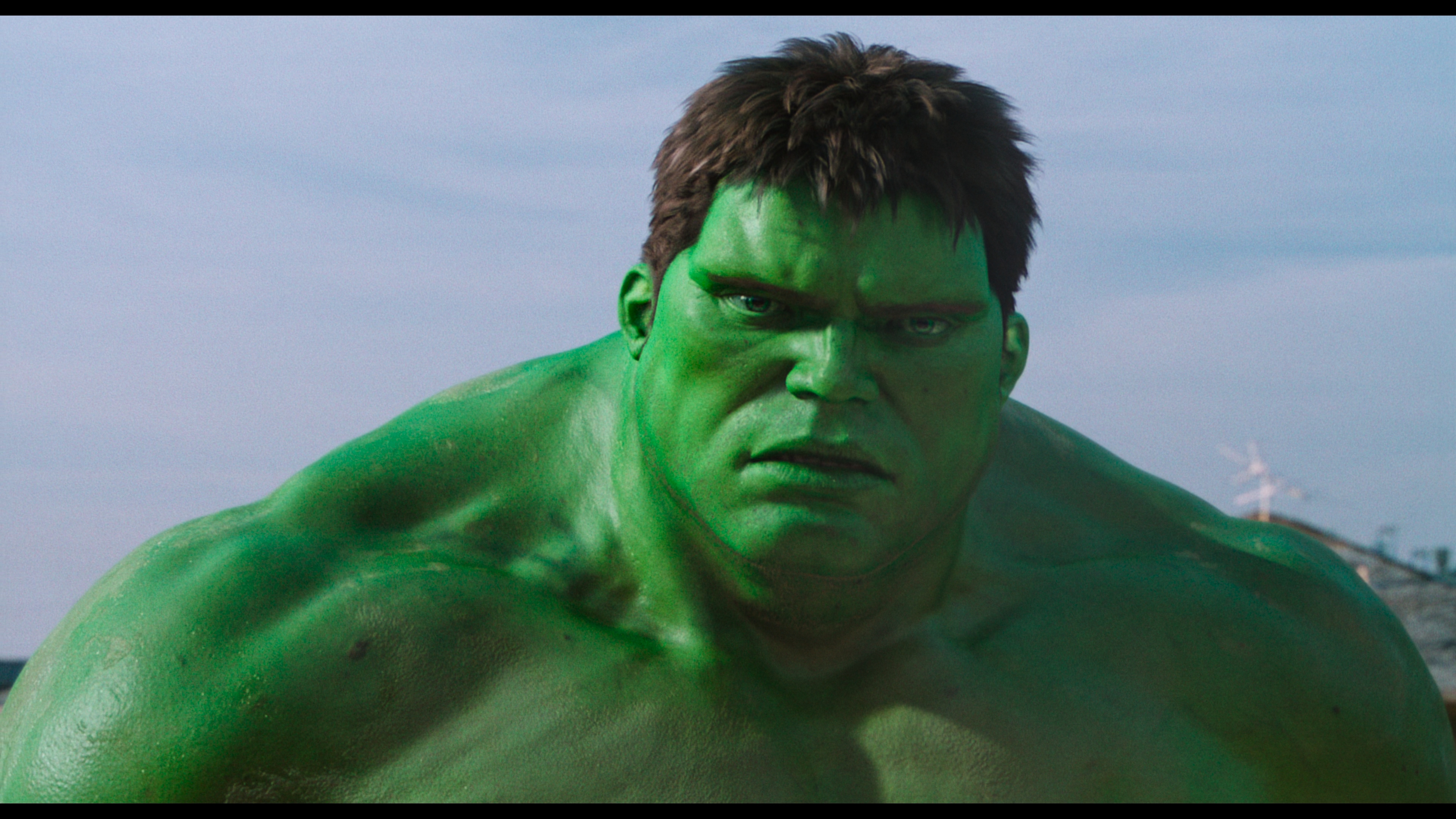 Note: To read an exclusive review of Incredible Hulk 2008 on 4K UHD, sign up for our Patreon.

Universal’s 4K release of Hulk represents the best and worst of this format. The good stuff first though. Universal masters this film-based source at full 4K. The resulting detail captures every instance of facial detail and set design. Even when resolution drops to support the computer generated Hulk, the loss is marginal. At the peak, sharpness in this presentation challenges anything from this format’s high-end. Precise grain replication helps.

It’s also colorful, pulling out not only the title character’s green skin, but the more comic book-esque touches. The machine that zaps Banner is fitted with colored cords and tubes, almost playfully bold. Pleasing flesh tones maintain consistency, with a push toward heavy orange when in flashback. With deep color, the appearance isn’t unnatural.

The faults begin to show with black levels. They crush anytime the images need darkness. While some instances fall in the early ‘00s CG purview, the rest don’t. Not only does shadow detail disappear, the HDR pass makes black levels look pasted in. Universal’s Bourne Supremacy did the same thing. Also like that Bourne disc, highlights stick out, although arguably better in Hulk. It’s bright and rich, contrasted well. That works to the favor of some western US cinematography late in the third act. Gamma radiation glows gorgeously too.

Remastered in DTS:X, the key to Hulk is bass. There’s plenty of it. Footsteps, bullets, tank rounds, missiles, explosions, destruction, and more land in the low-end with awesome force. Consistency does not let go either. Every needed instance produces a thud worthy of a well-scaled, studio production. When Banner is first exposed to gamma rays, the build-up swells into the room, drawing in air to create a vicious rumble suitable to such a moment.

In terms of upgrading though, this disc stays true to the 5.1 source. Traditional rear channels pick up the most action, with additional surrounds used infrequently at best. Overheards barely offer support, even as things like helicopters travel above. Nothing against the 5.1, which is capable of sustaining a soundstage, but there’s little boost over the Blu-ray.

The UHD contains the same commentary as on the included Blu-ray, where the other bonuses reside. That disc starts with a 24-minute making of, generic but informative. A look at the totality of Incredible Hulk history runs 16-minutes. Ang Lee earns a praise piece that runs a little over 14-minutes, with a deep dive into a key fight sequence runs 10-minutes and an editing featurette lasts five minutes. Additional materials reside within the U-Control window, and thankfully, the disc allows direct access to each.

Ang Lee’s Hulk isn’t a daring superhero movie, but in the context of post-9/11 Hollywood, it makes some subverise story choices.