Before Glory’s climactic charge on a Confederate fort, star Denzel Washington speaks openly to his white superior, played by Matthew Broderick. The discussion turns to what each man fights for. “I still don’t want to carry your flag,” says Washington, this after months of training, shared camaraderie, and work. Washington’s statement holds years of resentment from slavery, inequality, and continuing bigotry from Union troops.

Words project strength; it’s Glory’s script at its best, resonating through time and circumstance with depressing reality. Discrimination remains an incurable American scar in 2019; resentment flares with each racist transgression. The flag’s symbolism is different for those of color. Social progress allows those who feel injustice to kneel now, not charge on an enemy stronghold.

Racial disparity continued in later conflicts. Each time, cinema retooled the same want for segregation. Red Tails and Miracle as St. Anna dealt with World War II; dozens of Vietnam stories, America’s first truly integrated war, told of military bias. In a proper universe where Glory’s events brought an end to America’s divide, those movies needn’t exist. Yet they do. Washington’s contention works – proud of himself, proud of his country, but not the flag that scarred and held him down.

Seeing the Union’s white and black men stand on that beach, ready to charge… is a marvelous cinematic moment

Gunfire erupts with immediacy in Glory. An opening salvo of Confederate cannonballs drops Union soldiers, one whose head explodes from impact. In a medical tent, surgery is performed on a man without anesthetic, pleading for doctors to stop cutting. It’s essential as an introduction, showing what the men fought against – what they wanted to fight against – on a search for their freedom. Union superiors look down on these former slaves for their behavior. It’s appalling, knowing the threat they face is the same. Glory does not deify the North.

Broderick’s character emboldens these themes by sending letters home; he reads them aloud in narration. In one, he notes he doesn’t understand the black men under his command. Their culture feels foreign. Whether admitting it outright or not, Broderick can’t connect with them because he cannot see them as equal.

That’s his arc, learning and understanding who these men come to be. Or, more importantly, why they fight. When Washington speaks about his unwillingness to carry the flag, Broderick doesn’t press. He doesn’t flinch at what was prior an unpatriotic act. Broderick learned. He listened, observed, and accepted how dehumanized his troops were. Seeing the Union’s white and black men stand on that beach, ready to charge, in realization they fight for the same thing, is a marvelous cinematic moment. That they don’t win suggests the work still to be done. 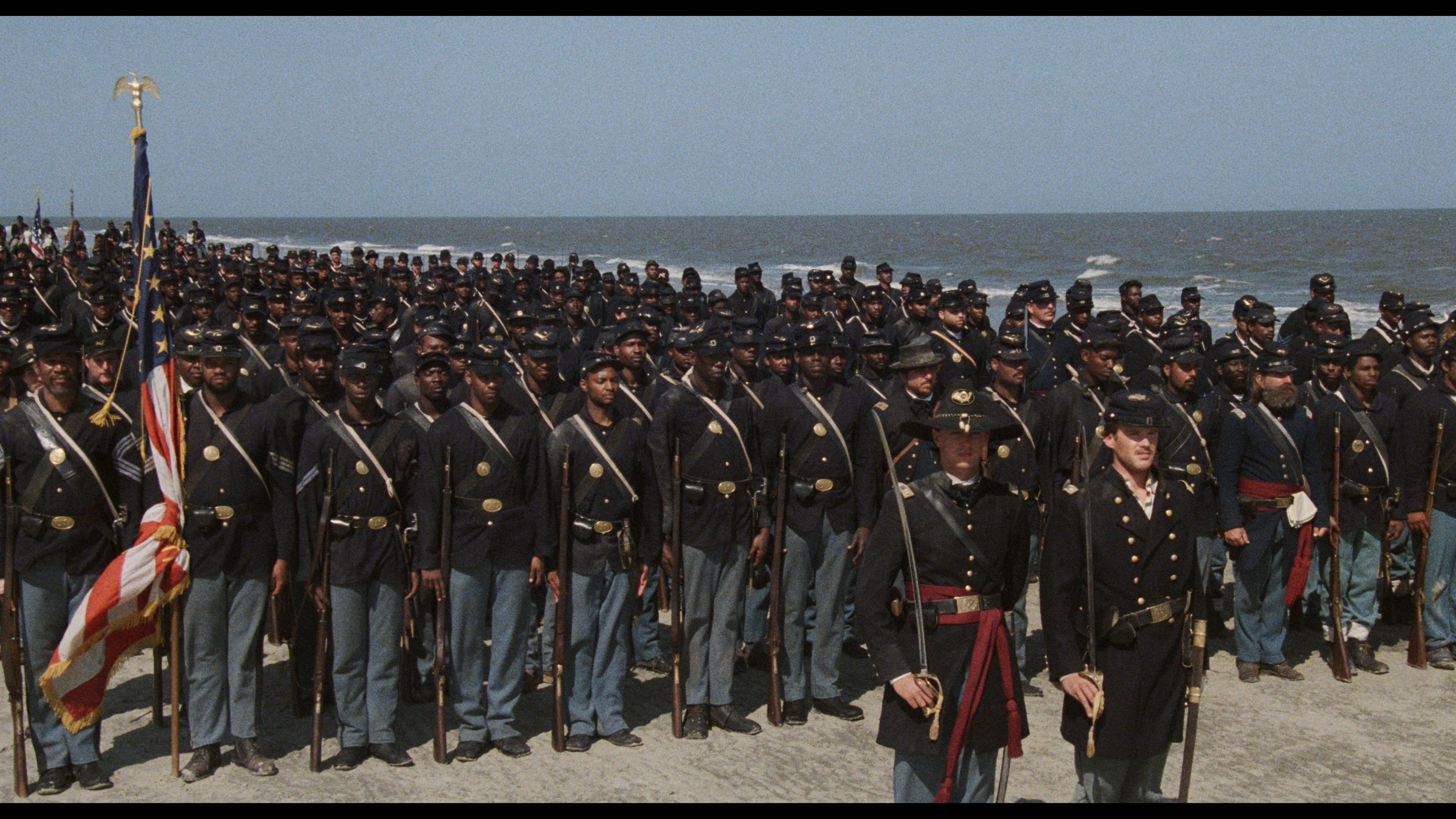 With a new 4K master, Glory comes to UHD in rich and sharp form. Often shot in a fog, Sony’s encode works overtime, turning grain noisy only in the thickest of hazes. Otherwise, the 35mm film source appears transparent in this transfer. Compared to the prior Blu-ray, the clean-up for 4K resolved any lingering damage/dirt concerns. Glory looks immaculate.

As a result, detail blooms with wonderful texture. In close, picking out uniform stitching on shoulder patches isn’t an issue. Facial definition reveals everything, from individual hairs to pores to dirt and sweat. From afar, resolution keeps long shots of troops precisely defined, enough to pick out actors no matter distance. When on the Union set, weathered wood reveals all of its composition, from water staining to markings.

Much of Glory was purposefully shot to remain dim, evoking the mood intended by director Edward Zwick and cinematographer Freddie Francis. Interiors keep light low, proper to the period and in some cases, crushing shadows. Again, that’s intent. This does not translate to a middling HDR pass however. Sun pierces cloudy skies with force, and reflects off water. There’s never a loss of contrast. Highlights break free from the murky backdrops at night, accentuating oil lamp flames. The counter then is pure, true black, enriching dimension and keeping depth consistent.

Consider too what the aesthetic does to color, softening and muting hues. The UHD brings out the deep navy blue of Union uniforms to go along with accurate flesh tones. A veil of gray hanging over Glory doesn’t diminish the intensity.

Brought into the modern audio era with Dolby Atmos, channel separation keeps up with each battle. Gunfire passes through the soundstage with accuracy. Cannonballs will jump through the overheads before impacting, a sharp effect that doesn’t sound artificially mixed. Soldiers yell out orders in each speaker, with attention paid to the score, ensuring scope is maintained.

Being a production from 1989, age takes some toll on fidelity. Treble struggles when peaking, wobbling a tad. Gunshots reveal a scratchiness, and dialog misses the finesse of something newer.

That’s fine, given Glory’s source. The bigger loss comes from the low-end. While dramatic in the score or when delivering battlefield drums, things like cannonball impacts lack the usual weight. They produce bass, if weakened and flimsy output for Glory’s scale. It’s too thin and weathered.

On the UHD, Sony brings over a picture-in-picture commentary with director Edward Zwick, Matthew Broderick, and Morgan Freeman chiming in separately. Note this is played over a dismal-looking print of Glory, not the 4K transfer.

Other bonuses reside on the Blu-ray, the same disc as previously released. That means a Zwick solo commentary and two deleted scenes optionally letting Zwick explain the cuts. A trip through the battlefield maps uses BD-Java, and is as dated a feature as that tech. Voices of Glory reads letters from actual troops. Morgan Freeman narrates a 45-minute, classy history lesson on the story, followed with an ‘80s era EPK detailing the production. Outdated trailers prove Sony didn’t do anything to this Blu-ray (including one for Air Force One).

Glory stands as a testament to understanding and bigotry’s lasting effects, told via a true Civil War story but still resonating today.

The following six screen shots serve as samples for our Patreon-exclusive set of 40 full 4K screen shots grabbed directly from the UHD: