Creators behind the Academy Award®-nominated Ernest & Celestine strike creative gold once again with the charming The Big Bad Fox and Other Tales. The whimsical French animated feature by directors Benjamin Renner and Patrick Imbert adapts Renner’s own heartwarming graphic novel about barnyard animals getting into mischief. A pure delight made with real heart for children and adults, the animal’s comedic adventures are told in a series of three interlocking stories.

Funny with a surprising amount of underlying tenderness, the animated movie stars a fox up to no good, mothering a trio of chicks in its best segment. In the first short, three barnyard animals led by a pig (voiced by Justin Edwards in the English dub) have to take care of a human baby left behind by a lazy stork. What follows are their wacky attempts to save the baby from harm.

The last segment sees a duck wanting to be Santa Claus for Christmas and bring presents for everyone. These simple but endearing adventures form the basis of The Big Bad Fox and Other Tales. While the three shorts have a very loose continuity in their art, the stories aren’t meaningfully tied together beyond a simple framing device.

The delirious comedy has a quaint underlying message of family and friends, perfect for younger audiences. Young children will love these animal characters, while their parents will be amused by the anthropomorphic characters’ human foibles. This is gentle humor that delivers with amusing wit and a sly French approach.

While Hollywood has abandoned traditional animation for CGI, it’s still popular overseas in places like Europe and Japan. Excellent movies like The Big Bad Fox and Other Tales prove it remains a capable medium for storytelling and lively all-ages entertainment. 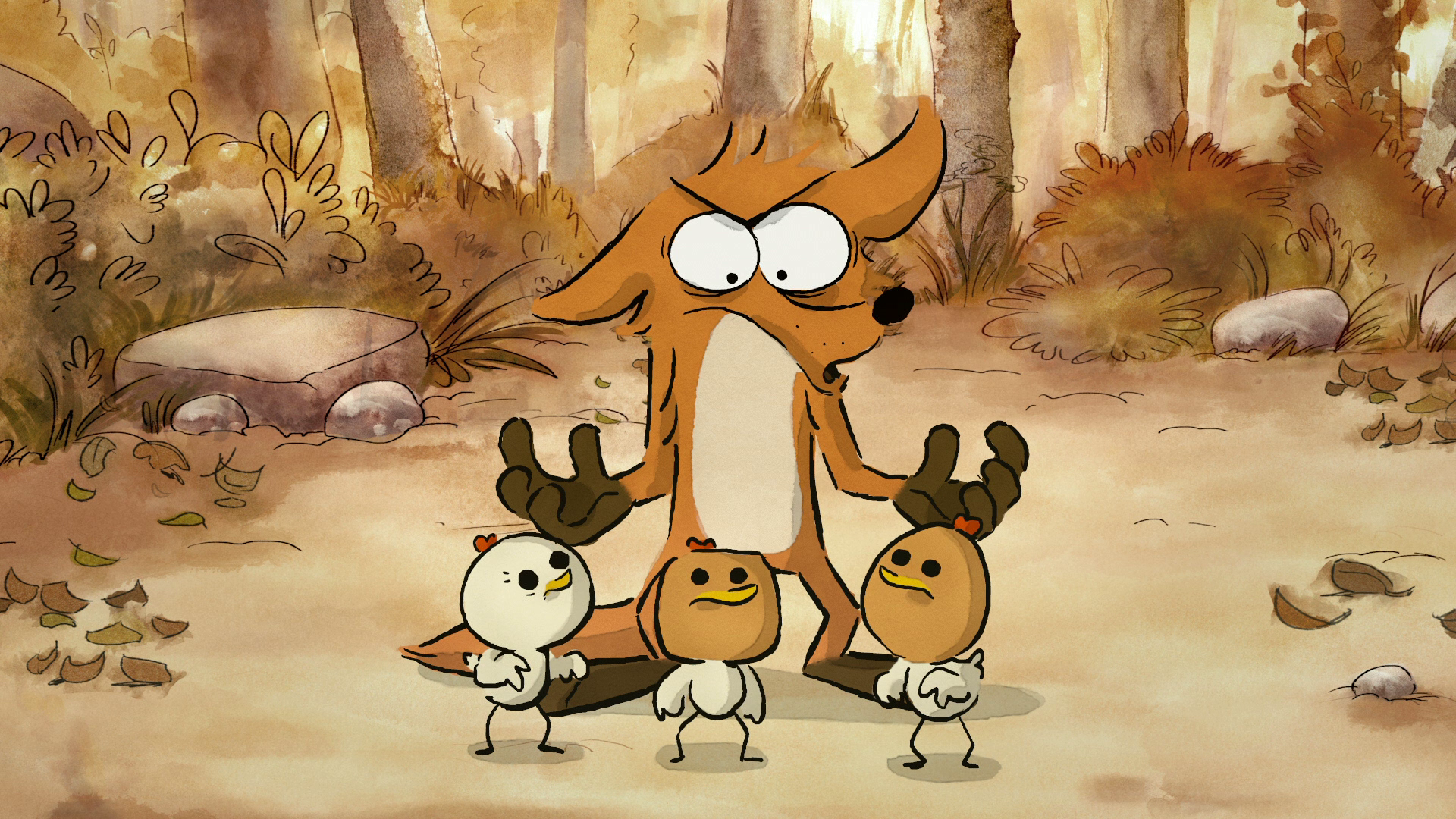 Originally rendered in watercolor by Benjamin Renner for his acclaimed graphic novel, The Big Bad Fox and Other Tales traditionally animates his adorable animal designs for magnificent picture quality on Blu-ray. The 2017 animated French movie is a true visual delight in 1080P resolution with simple yet neatly crafted animation.

The main feature runs 82 minutes on a BD-50. Presented at a 1.78:1 aspect ratio, bright watercolors fill the screen. The perfect AVC encode sees absolutely no banding. Everything has been dialed in perfectly with awesome black levels. This disc is a showcase for how good non-CGI animation can look today and it works quite well as videophile demo material. Licensed from StudioCanal, every facet of the striking digital transfer brings the expressive animation to life.

The movie sees both its original French audio and a well-done English dub in 5.1 DTS-HD MA. There’s nothing particularly exciting happening in the surround mixes, which largely focus its action on the front soundstage. Recording fidelity is perfect with clear dialogue exchanges and excellent precision. Like most animated films, audio design is strong with an array of realistic and well-done effects.

The English dub features British comedians and actors. To my American ears, the British dub is superb and provides a funnier experience than the native French soundtrack. I like my barnyard animals voiced by Brits, thank you very much.

English SDH in the form of dubtitles and a separate set of English subtitles are provided, the latter actually translating the French audio directly. It’s evident the English Dub took some liberties with the original French audio, expanding some lines and even refining the dialogue. French and Spanish subtitles are also included. All display in a white font.

GKIDS and Shout Factory puts out The Big Bad Fox and Other Tales in a two-disc combo set with a DVD also included. It also gets a cardboard slipcover. The bonus features offer some interesting insights into the production and help explain the movie’s whimsical charm. A commentary would have been icing on the cake but this is still a nice set of extras for a 2017 animated French release only now getting released in North America.

Interview with the Directors (09:30 in HD) – Directors Benjamin Renner and Patrick Imbert in English explain how they adapted Renner’s graphic novel to the screen, including the animation designs.

The Making Of The Big Bad Fox and Other Tales (15:22 in HD; French audio w/ English subtitles) – A charming and amusing featurette that takes a unique approach. Four young French children “interview” various members of the production team. A bit wacky in execution but worth a look since it’s something different than the usual behind-the-scenes featurette.

Trailers (05:15 in HD) – Various trailers for The Big Bad Fox and Other Tales, including both English and French trailers.

The Big Bad Fox and Other Tales

An engaging and funny French children’s animated movie from the creators of Ernest & Celestine.

The 15 unaltered images below have been directly pulled from the Blu-ray. For an additional 24 Big Bad Fox screenshots, early access to all screens (plus the 30,000+ already in our library), 75+ exclusive 4K UHD reviews and more, support us on Patreon.