Possibly in time for the 30th anniversary of serial killer Ted Bundy’s execution, Mill Creek Entertainment digs up the true crime drama Ann Rule Presents: The Stranger Beside Me – The Ted Bundy Story for Blu-ray release. Yes, that long-winded title smacks of television because this is actually a 2003 Canadian production made for broadcast. The television movie first aired on the USA Network.

Starring Billy Campbell as the notorious serial killer Ted Bundy and Barbara Hershey as Ann Rule, a true crime author that rose to fame on her personal connection to Bundy, the biopic details Bundy’s murder spree in the Seventies and his ensuing years in prison, becoming a household name across America.

The Stranger Beside Me is based on Ann Rule’s New York Times bestseller of her personal account and study of Ted Bundy’s crimes. It tells the narrative of someone you personally know becoming one of America’s most notorious serial killers.

It’s hard believing today that Ted Bundy got away with so many murders before finally getting caught by the police. He exploited a society unprepared yet for dealing with a cunning predator that took advantage of friendly young women. By most estimates police have identified at least thirty victims and likely more we’ll never completely discover. Taking advantage of his good looks and smooth personality, Bundy killed young women from Washington to Florida.

Ann Rule first meets Ted Bundy working the suicide hotline together in Seattle. The ex-cop dabbles in writing true-crime stories. The single mother has a daughter and burgeoning writing career when she befriends a charming, intelligent man named Ted Bundy. A handsome charmer with the ladies, Bundy is a serial killer that preys on attractive young women, typically college students. No one on the surface would peg him as a murderous psychopath.

After delving into a string of brutal murders and missing-women cases in Seattle with her friends on the force, the true crime writer becomes more and more convinced her friend Ted Bundy should be the primary suspect. Bundy repeatedly denies being the serial killer and his knowledge of the law, thanks to being a law school student, temporarily helps him escape arrest.

The movie has strong performances and smoothly recaps Bundy’s horrifying crimes through the prism of Ann Rule’s reporting. The Stranger Beside Me dwells heavily on her passing friendship with the serial killer and gives it more importance than most historians would generally say happened. But it somehow works within the context of this movie for dramatic purposes, fleshing out Bundy’s dual allure and threat. Hershey builds an intriguing and sympathetic character with her mannered performance.

The movie isn’t afraid of taking dramatic license for the sake of entertainment and largely shies away from directly showing Bundy’s murders. This is where the limits of being an early 2000s television production come out. While the drama falls easily into the trappings of true crime and procedural tropes, it rarely gets your heart racing. This is more drama than actual criminal thriller.

Some have also criticized The Stranger Beside Me for its inauthentic handling of history and the facts. The plot is not particularly accurate with its factual details and needlessly changes things for unknown reasons, beyond merely changing names to protect innocent people. If you’re someone that has read up on Ted Bundy’s crimes and know his personal background, that may undermine how seriously you take this movie.

The Stranger Beside Me is a fine television movie that offers decent insight into Ted Bundy’s life with a veteran cast of capable performers smartly cast in their roles. While not completely accurate in its details, it’s an engaging true crime saga that covers one of America’s most famous serial killers. 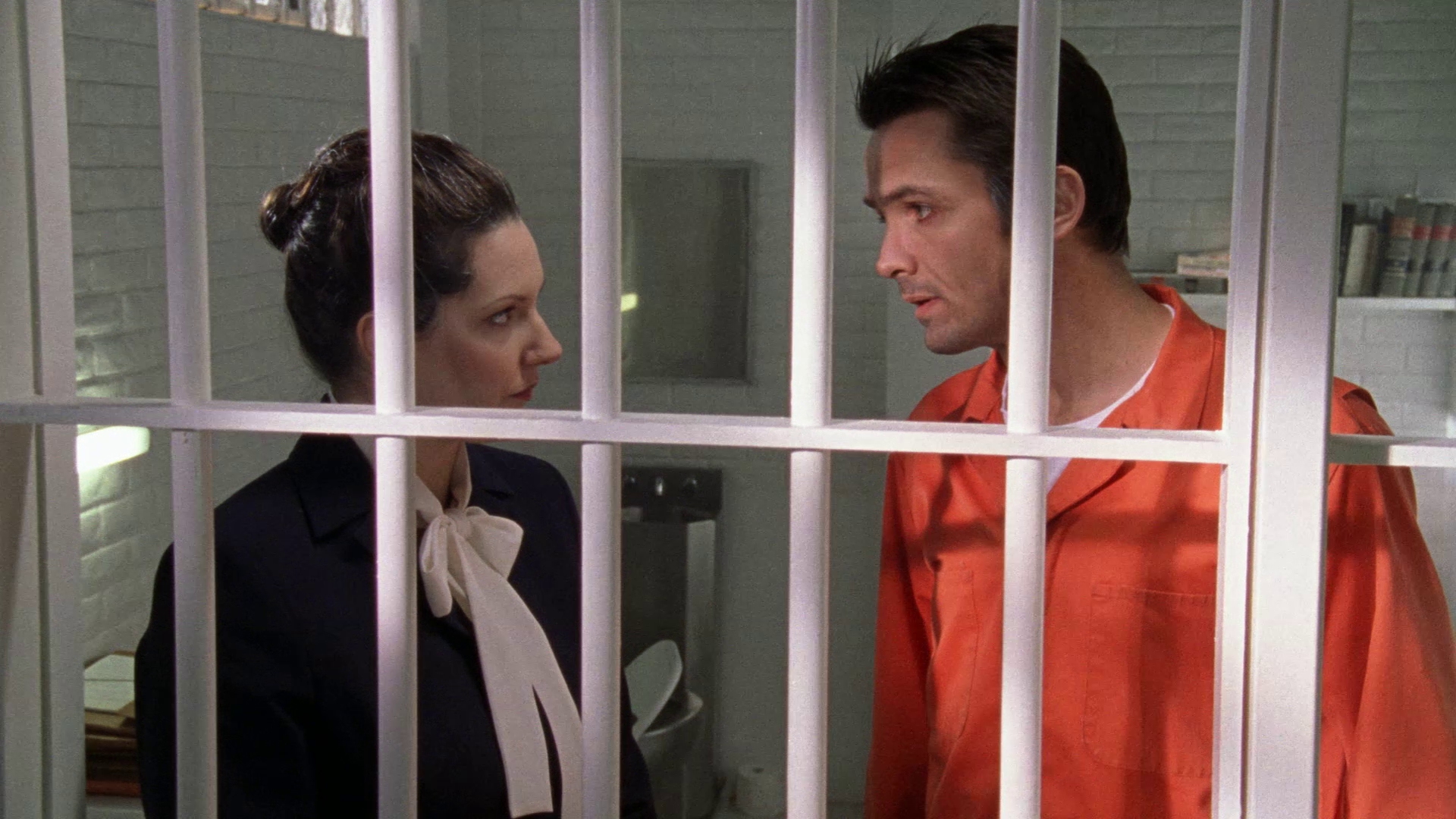 Mill Creek Entertainment licenses the made-for-television production from SONAR Entertainment for this relatively strong Blu-ray presentation. The 2003 movie receives a serviceable film transfer with capable definition and fine grain reproduction. Running 90 minutes, the main feature gets a thoroughly efficient AVC encode on a BD-25 without noticeable artifacts. Mill Creek isn’t known for great BDs but The Stranger Beside Me is a clear exception.

The largely film-like transfer avoids deleterious post-processing and retains solid high-frequency content. The transfer appears to have been taken from the negative, which remains in suitably decent condition without significant degradation. A few hints of speckling and minor crushing don’t substantially affect the overall picture quality. There’s more pop to the 1080P video than one would expect for this kind of catalog fare.

The serviceable contrast and black levels aren’t perfect but look good enough. Close-ups display razor-sharp detail, even if exterior and outdoor shots are softer. The 1.78:1 presentation produces solid picture quality results. This is cinematography with enough depth and dimension to make purchasing the BD worthwhile.

The 2.0 DTS-HD MA soundtrack in stereo offers intelligible dialogue and an open soundstage for the backing score. This isn’t anything more than simple, straightforward audio design made for television. There isn’t much happening beyond basic audio cues and traditional stereo separation.

No special features are include on the disc. The Blu-ray is coded for Region A.

A digital copy from a new streaming service called MovieSPREE is included. It’s not connected to the major Hollywood digital providers, so no Movies Anywhere or UltraViolet.

The Stranger Beside Me

A look at serial killer Ted Bundy that offers decent insight into his heinous crimes while telling it in a compelling narrative framed around Ann Rule’s bestselling book.

The 15 undoctored images below have been ripped from the Blu-ray. For an additional 20 Stranger Beside Me screenshots, early access to all screens (plus the 30,000+ already in our library), 75+ exclusive 4K UHD reviews, and more goodies, support us on Patreon.