Under the cover of the ‘80s, Weird Science gets away with two 14-ish year old boys showering with a 30-year old woman. It’s the boy’s fantasy after all. They brought this woman to life, a literal living Barbie, who guides them in social maturation. With John Hughes’ touch, Weird Science ducks some exploitative potential.

This isn’t Revenge of the Nerds or Porky’s; Weird Science still comes from the era of rejected nerd comedies though. Those cornerstone elements remain: The outcasts who can’t find their courage in front of women and lacking masculine traits, finding themselves abused or taken advantage of.

There’s an ironic comedy to Weird Science now. Geeky pop culture took off and is cool. Playing with computers is essential to a professional life. Videogames sprawled into the mainstream. Co-stars Anthony Michael Hall and Ilan Mitchell-Smith seem typical from 2019’s eyes. They merely lack the social standing and don’t understand how to rise in high school’s hierarchy.

Enter Kelly LeBrock, their computer-made fantasy model made from bits-and-pieces of magazine marketing and Playboy back issues. She’s every bit a figment of teenage imagination, turning Weird Science into a coming-of-age satire that eventually goes totally off-the-wall. Hughes dropped his tender, well drawn, real world comedies when envisioning this.

Weird Science looks and plays like a John Landis production

That fantasy helps null some of the ’80’s creepiness. Viewed as a bonkers, bizzaro reverie, things look more innocent. LeBrock stands in for moral guidance, not only sex appeal. She has her fun, teasing and disrupting, forcing the nerdy duo well out of their comfort zone. By the time Weird Science sends mutant bikers into a house party to thrash drywall, everything has gone off the rails. Then Bill Paxton turns into a poop monster, removing the rails entirely.

Sure, Weird Science uses women. It exploits them. Nudity is squarely on the female side (and garnering only a PG-13, an era before a nipple was cataclysmic to young eyes). Hall and Smith yearn for two of their classmates who in one night turn their allegiances away from local bullies to the new high school heroes.

A critical exploration of Weird Science falls more on LeBrock’s role, a new age, sexually liberal guidepost for these teens rather than an object to grope. In fact, their dreams of showering with her go completely haywire. From there, she slowly breaks them free of conservative parental rule (a key scene lashing out at Puritan values), allowing them a freedom they never knew and the needed ability to actually talk to those of the opposite sex. That’s John Hughes’ touch. Think of this – LeBrock creates a convertible out of thin air, yet the boys never ask her for anything explicit or demanding. She gives them only the nudge they need.

Weird Science looks and plays like a John Landis production – Animal House, with Frankenstein influence – but it’s the reserved caution of Hughes’ script that carefully navigates a line between the fantastic and truthful. 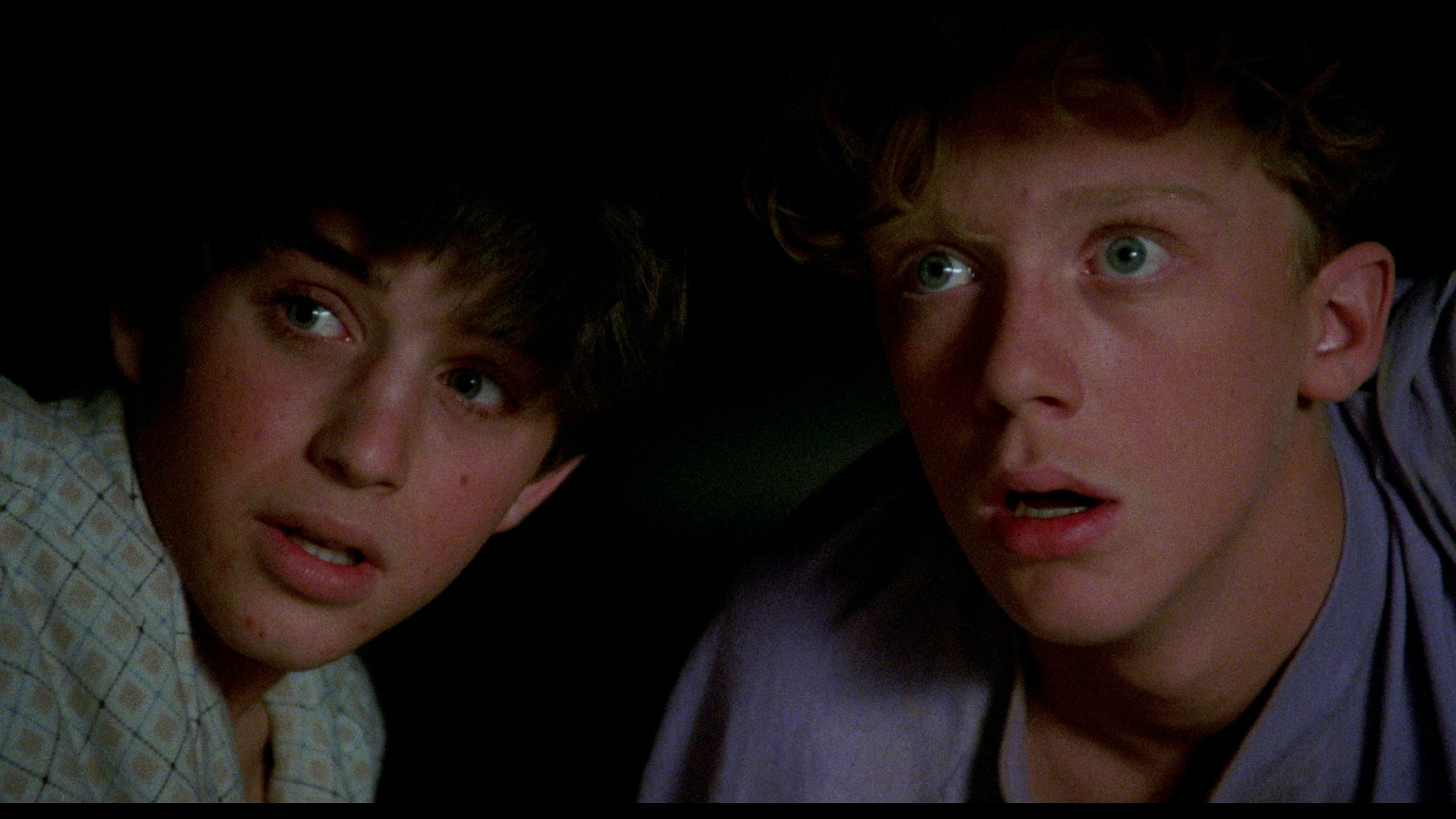 Arrow Video provides three versions of this movie in this special edition. Theatrical, extended, and TV cut. The latter is SD and 4:3. With the other two, the same beautiful master that adds tremendous life to this ‘80s classic. Weird Science never looked so vibrant until now, with stellar contrast and rich depth creating dimension of the modern kind rather than something fading from age.

And the color is generously saturated. Hearty primaries swell on screen. Flesh tones remain properly neutral. When LeBrock spawns a pink car, the paint blossoms as she drives past the camera. Early CG effects stick out with their color density.

The 35mm film stock poses a challenge for the encode. Grain fluctuates. Arrow’s encode keeps on it, resolving the material without loss of fidelity. This new scan shows itself through dominating sharpness and well-resolved detail. By way of the cinematography, Weird Science doesn’t push heavy detail in the usual manner, so facial detail is uncommon. Rather, the scene of party guests showing up at the door exhibit phenomenal resolution, enough to see well into the back of that crowd.

Dolby Digital handles the 5.1 mix, but stick with the DTS-HD stereo track. It’s more natural. While channel separation is lean, the fight is in fidelity. As the kids fire up their computer, there’s a bevy of sound, all in balance. A smooth low-end and limited loss in the highs keep the mix audibly pleasing.

Dialog is where things struggle, somewhere between torched and waning. Other times, it’s naturally faded with a rawness typical of the decade.

Arrow tracks down five members of the crew for new interviews. Jackie Burch handled casting (running 6:03), Craig Reardo the effects (the lengthiest at 19:38), editing was handed to Chris Lebazan (10:46), Ira Newborn worked on the score (13:43). and actor John Kapelos discusses his role as Dino (6:55).

A 2008 retrospective is great, with the likes of Diablo Cody and various critics discussing Weird Science with appreciation. This runs 16:41. Trailers, radio spots, and image galleries fill in the final bits of space.

The 15 unaltered images below represent the Blu-ray. For an additional 30 Weird Science screenshots, early access to all screens (plus the 30,000+ already in our library), 75+ exclusive 4K UHD reviews, and more, support us on Patreon.