There’s amazing wish fulfillment happening in Gilles de Maistre’s enchanting Mia and the White Lion which may upset some parents but will dazzle younger audiences. For kids and animal lovers bored by the latest CGI family flick comes this unique movie. It’s about a young girl developing a special bond with a lion cub against all odds, and her harrowing adventure to eventually free the lion in South Africa.

These are real lions on screen interacting in close proximity with the cast members, which includes Daniah De Villiers, Mélanie Laurent, Langley Kirkwood, Ryan Mac Lennan, and Lionel Newton. The cast’s close relationship with the lions on screen comes through loud and clear, supervised by the “lion whisperer” Kevin Richardson’s plan over three years to build it off the screen.

The family adventure film has an edge to its otherwise PG story which makes it stand out from today’s increasingly timid family fare that attempts to sand off any dangerous stakes. It’s the kind of engaging material that Walt Disney may have tackled when he first branched into live-action family movies.

… made for wildlife and animal lovers

A family leaves London to move back to South Africa so they can manage a lion farm. John and his French wife Alice bring their two young children along with them, Mia and Mick. Mia hates leaving London behind at first and only her relationship with a lion cub named Charlie, the proverbial white lion, makes her happy.

The film is really about Mia’s growing relationship with Charlie over the course of three years in South Africa, as the trials and tribulations of her family’s struggling lion farm puts pressure on everyone involved. Afraid to upset and disturb their daughter’s happiness, Charlie becomes more and more of a nuisance as he grows in size and begins posing a threat. The relationship even becomes unhealthy as Mia grows more and more attached to Charlie.

Filmed over the course of three years so the lion cubs could literally grow comfortable with the human cast and accept them, including young Daniah De Villiers (Zero is Not Nothing) playing Mia, it’s uniquely magical to watch lions acting like overgrown house cats. Her bond with Charlie plays out in a number of charming scenes as the young girl gets attached to her special friend.

However, the story acknowledges the real dangers of treating powerful animals like lions as pets despite glorifying Mia’s relationship. A constant and uneasy threat of violence hangs over the movie. Something could go very wrong dealing with lions in this manner and to his credit, Gilles de Maistre includes scenes that remind you these are wild animals. Real stakes are involved and the entire family feels it.

Mia and the White Lion is at its best enjoying the delightfully easy friendship that grows between the girl and her lion. This is made for wildlife and animal lovers. There are many remarkable beats between the pair, even as certain events keep threatening their relationship. When Mia discovers what really happens to the lions from her family’s farm, she jumps into overdrive coming up with a plan to save her beloved Charlie.

If you are bored by CGI cartoons, Mia and the White Lion is fine family fare due to its cast and their close relationship with lions on the screen. Delivering a message about family and wildlife conservation, it’s an enjoyable journey. 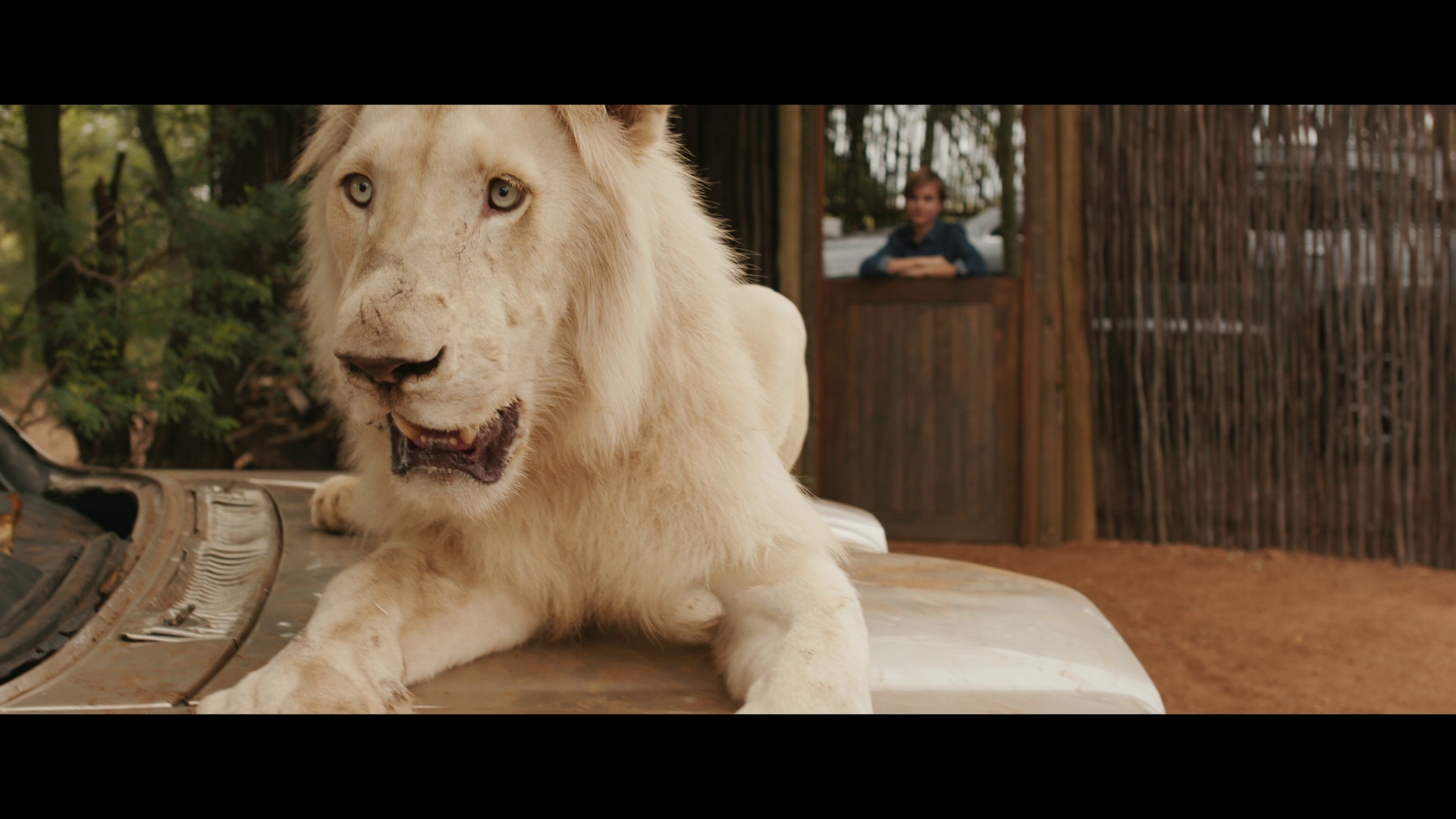 Shout Factory has licensed Mia and the White Lion from StudioCanal. This is a superb Blu-ray presentation done with top-notch specifications and an impressive transfer taken from a Digital Intermediate. The stellar 2.35:1 video is a result of the clean, scenic cinematography by Brendan Barnes.

It often looks more like a nature shoot than a traditional movie. Mostly shot outdoors at the Welgedacht Reserve in South Africa, the picture quality is close to what we’ve come to expect from videophile legends like the BBC’s Planet Earth.

The vivid, razor-sharp 1080P main feature clocks in at 98 minutes on a BD-50. The perfect AVC encode runs at startlingly high parameters. About the only complaint is one extended scene in which Charlie escapes his pen and the family has to look for him in shrouded darkness. Some expected ISO noise creeps into the otherwise pristine presentation.

There’s adequate separation across the front soundstage and impressive fidelity when it comes to the occasional song that pops up. The audio has a few handful of better mid-bass moments but it’s not a bass-driven track.

A secondary stereo 2.0 DTS-HD MA option is included that appears to be a fine down-mix of the more impressive surround track. A French dub in 5.1 DTS-HD MA is another audio choice. Optional English subtitles in white remain inside the 2.35:1 widescreen video at all times.

Shout Factory includes several featurettes and other special features in this solid Blu-ray and DVD combo set. You’ll learn a lot about the unique development of this production and “Lion Whisperer” Kevin Richardson’s plan for his lions to interact with the cast over a span of three years. This is fairly standard EPK material that happens to offer more insight than normal.

Interview With Actress Daniah De Villiers (03:32 in HD) – The young actress explains the relationship she developed with Thor, the lion that played Charlie. Her family had to relocate to South Africa for this role.

The Making Of Mia And The White Lion Featurette (02:56 in HD) – A brief behind-the-scenes featurette.

The Extraordinary Friendship Featurette (02:15 in HD) – This covers the unique relationship between the cast and the lions, which grew up from cubs to full-sized lions over the course of three years.

Deleted Scenes (05:25 in HD) – There’s nothing particularly earthshattering in these five mostly forgettable scenes which add a few character beats.

Casting Footage (05:56 in HD) – The audition tapes for young actors Daniah De Villiers and Ryan Mac Lennan, the two children in the movie.

Mia and the White Lion

An enchanting family film that sees a young girl developing an incredibly close bond with a lion which includes footage you must see to believe.

The 15 unaltered images below represent the Blu-ray. For an additional 25 Mia and the White Lion screenshots, early access to all screens (plus the 30,000+ already in our library), 75+ exclusive 4K UHD reviews and more goodies, support us on Patreon.